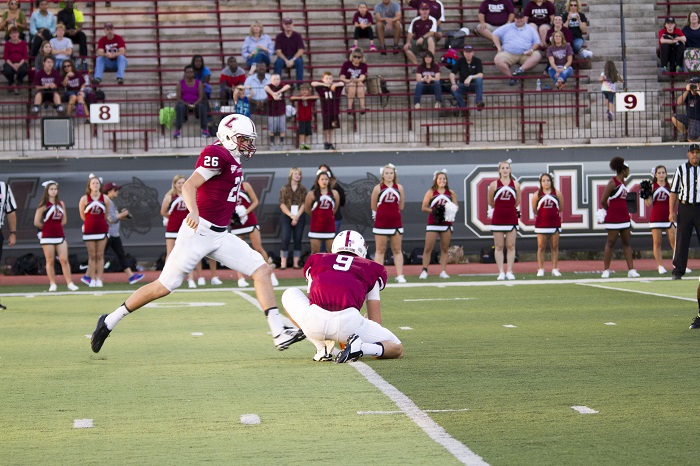 When Lafayette defeated Fordham at home last year, the Rams were without junior quarterback Mike Nebrich due to injury and without freshman tailback Chase Edmonds; with them, things might have been different. In this year’s Fordham-Lafayette match-up, played last Saturday, the Rams controlled the Leopard defense, moving the ball efficiently both on the ground and through the air. Quarterback Mike Nebrich went 23 on 32 passing for 297 yards, three touchdowns and no interceptions. Running back Chase Edmonds gained 187 yards on the ground and added two touchdowns on the day.

For the past four seasons, Fordham has been offer scholarships for student athletes, whereas all other Patriot League teams have only had access to scholarships for two seasons. This has a direct impact on the level of talent being recruited to schools.

“It is what it is,” head coach Frank Tavani said. “We all in essence should be thanking Fordham because we might not have scholarships had they not pushed it.”

As for the Leopards offense Saturday, the ground game suffered for the first time all year. The Leopards gained only 68 rushing yards, limiting senior tailback Ross Scheuerman to only 39 yards on 14 carries.

Lafayette was able to keep pace with the Rams for the first quarter, allowing only one score on a Chase Edmonds 44-yard rush with just 45 seconds left in the quarter. However, the Lafayette defense was irrelevant in the second quarter, allowing Fordham to score four times.

The Leopards had limited turnovers, a must against Fordham who had scored 78 points off of turnovers this season. Sophomore quarterback Blake Searfoss only threw one interception on the day. Searfoss faired well in his first career start, considering the lack of run support, going 18 of 32 passing for 190 yards and two touchdowns.

Lafayette faces a 2-4 Georgetown team Saturday that seems to have a struggling offense; they average just 268.3 yards of offense per game. Georgetown also seems to have a weak defense, allowing their opponents to gain 362.2 yards of total offense per game. However, Georgetown has some star players: senior linebacker Nick Alfieri ranks 15th in the country, averaging 10.3 tackles per game, and senior defensive lineman Alec May ranks second in the country in sacks with 9.5 this season.

“They’re a great bunch, but they aren’t anything we haven’t seen this year,” sophomore quarterback Blake Searfoss said. “I think that we will be able to block them and establish the run game against them. We feel that we can play well against them.”

The Alfieri-May duo may pose a threat to the Leopards’ run game. However, if the Leopards can limit turnovers like they did against Fordham and establish a presence through the air, then they should have no problem claiming victory over the Hoyas. 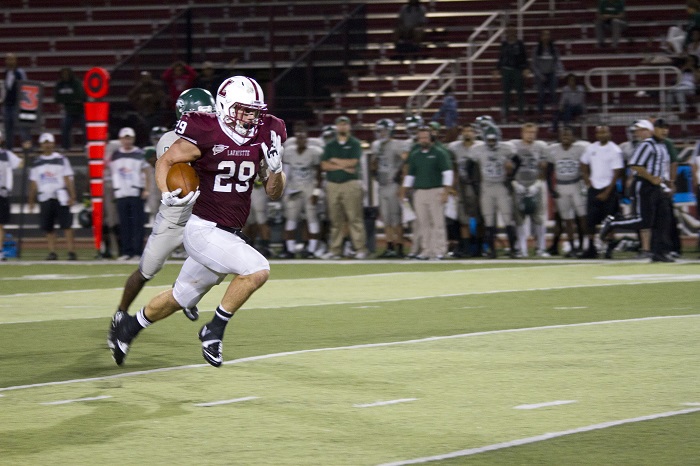 Senior Ross Scheuerman breaks away from the defense for a big gain.