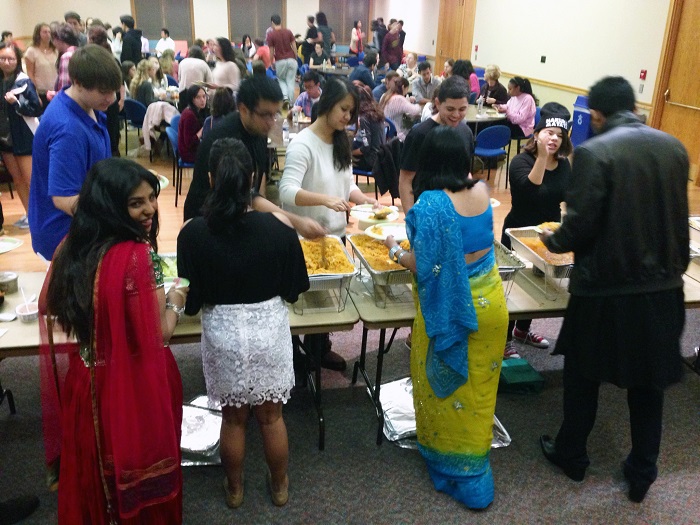 Students are celebrating Eid and Yom Kippur at dinner hosted by Hillel and MSA.

The Hillel Society and the Muslim Student Association united last Saturday to host a dinner in celebration of their respective holidays: Yom Kippur and Eid al-Adha.

“The MSA approached us over the summer and said, ‘We noticed that our two holidays fall on the same day, why don’t we have it together?’” President of Hillel Samantha Chavin ‘16 said. “It was a beautiful and symbolic gesture, given everything that is happening in the world lately.”

“We each did half-half,” President of MSA Basmah Raja ‘15 said. “We had an emcee, they had an emcee. We did the Eid presentation, they did the Yom Kippur presentations.”

These presentations included poems and music, as well as information about both of the holidays for the people who attended the event but did not know what either holiday represented. Some of the students celebrating Eid were dressed in traditional clothes, such as tunics and dresses.

Yom Kippur is the Day of Atonement for sins for Jews. During Yom Kippur, Jews are expected to abstain from working and focus on reflecting on themselves and what they have done during the past year.

“Yom Kippur, and the holidays in general, are a time for reflection for me,” Miriam Swartz ‘18 said. “You’re supposed to ask for forgiveness for the sins of the past year.”

“I look at the holidays season as a checkpoint to look at who I am and where I am going and what I can do better,” said Chavin.

Eid al-Adha is a commemoration of Ibrahim’s willingness to sacrifice his son to God. It signifies the end of the Hajj, the pilgrimage to Mecca. Muslims wear new clothes and attend prayers at mosques, some of which give lectures on Islam and Islamic history. Prayer takes place any time after the sun has risen and before midday.

“It’s one of those days when all of your family gets together, not just your immediate family,” Raja ’15 said. “We have good food and enjoy each other’s presence as well as celebrating that we are Muslims.”

As a part of the holiday, some Muslims buy and sacrifice an animal. They separate the meat into three pieces. One of the pieces is supposed to be shared with your family, the second with friends and the third is supposed to be given to people less fortunate than yourself.