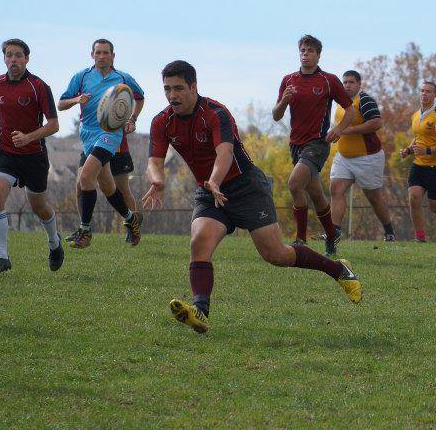 John Walker, along with the Rugby team attempts to exceed there success from last season at the EPRU.

What’s been the hardest part about transitioning from forward to inside center?

The two positions are really different so that’s been difficult. Forward is more of a combat position where you block up front and inside center has more passing in the backfield.

Being that the team reached nationals last year, what are the goals for this season?

We got swept at nationals so we want to make it back there and be more competitive. I would love to see us win a few games and see where that takes us.

Did you play rugby in high school? How did you get into it?

No. I grew tired of playing lacrosse so I browsed new sports and found rugby. The team is made up of a great group of guys and it is a fun, exciting sport, so I stuck with it.

How does it feel to be on a five game win streak going into the EPRU Quarterfinals?

Pretty sick. The team is mostly sophomores and freshmen so it is amazing to see how good we are now and how great we could be in the future. We’re all excited for the home playoff game and hope we can keep competing at such a high level.

Concussions are a big area of concern in the sports world today. Has the worry affected your play at all?

Luckily I have a thick head so it’s yet to be a problem. I haven’t really slowed down or let it get in the way of my play. I’ve literally head-butted people and been fine.

Did you compete over the summer?

No, but I taught my campers how to play rugby.

Who on the team deserves a shout-out for their performance thus far?

Freshman Cameron Bartlett. He’s our winger and his speed has really helped us. Also junior Chris Nelsen for being our captain, a monster on the field and a leader off the field.

Paris. I’ve been there twice and both trips have been adventures.

Does the team have any quirky pregame rituals?

Yeah we do a pretty intense chant.

If you could meet one celebrity, who would it be?

Chad Ochocinco and Metta World Peace are known for changing their names. If you were to change your name for the sport, what would you change it to?

What don’t people know about you?

I like piña coladas and getting lost in the rain.

It’s a group of some of the best guys I’ve ever met. They’re crazy but incredibly honorable and love bashing skulls.