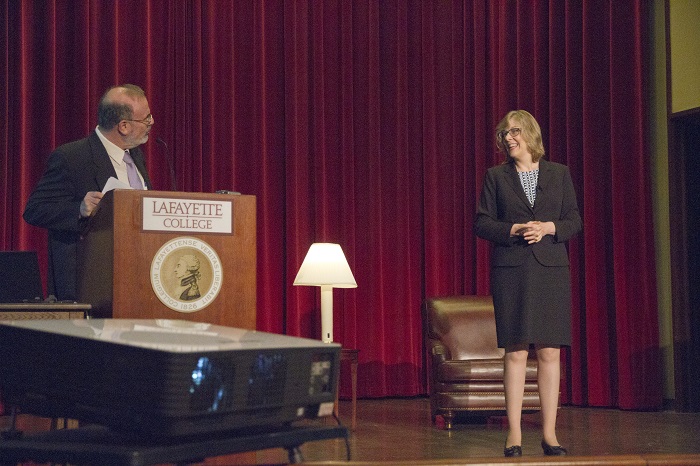 Professor Ilan Peleg and Professor Kimberly Marten speak at the lecture in Colton Chapel on Oct. 16

As Russia continues to stay in the news over its conflict with Ukraine, author and international affairs analyst Kimberly Marten came to talk to Lafayette students about the nature of Russian foreign policy.

It is unpredictable, she said.

Marten said President Vladimir Putin dictates much of Russian foreign policy. Because he focuses on broad goals such as staying in power and increasing the country’s power abroad, she said Russia’s actions in the international community are difficult to anticipate.

“It’s like playing a game of whack-a-mole, because you never know when Putin is going to pop up next,” Marten, who is the deputy director of Columbia University’s Harriman Institute, said.

Marten, however, did mention there is a secretive network of elite individuals in Putin’s inner circle and it is unknown how much influence they have over him in making policy decisions.

Since Russia’s foreign policy is as a whole unpredictable, she said the United States should practice a modern containment policy towards the country by not engaging Putin unless he crosses a “red line.” What those lines are, she said, needs to be more defined.

“We need to practice containment,” Marten said. “We need to make sure that Russia does not believe that now that it’s had success in Ukraine, it could keep on moving and now take over what is now NATO territory.”

Marten spoke to over 200 people in Colton Chapel last Thursday as part of the Class of 1961 International Affairs Speakers Series. President and CEO of the New America Foundation, a think tank based in Washington, Anne-Marie Slaughter spearheaded the series two years ago, followed by Professor of Middle East History at Trinity University David Lesch the year after.

The event was another one of Marten’s frequent public appearances, having previously been on CNN International, NPR’s “Fresh Air,” and the Daily Show with Jon Stewart. When Marten is not in the media, she is a professor at Barnard College.

Marten’s reputation as a good teacher was one of the reasons professor Ilan Peleg, who is the chair of the faculty committee on the lecture series, said he wanted her to speak at Lafayette. He also said he was that he was impressed by her scholarship and described her assessment of Russia as “realistic.”

“I think that in general she tried very hard to be balanced,” Peleg said. “I think she told you what she thought was the main explanations for the Russian behavior [in international affairs]…I think she came across as very moderate in her approach.”

But professor Rado Pribic disagreed. He said Marten explained Putin’s personality well, but that her characterization of Russia was inaccurate and at times even prejudiced. The talk could have been less biased, he said.

Some of the issues he said Marten could have brought up in her speech is NATO’s expansion threatening Russia in the past, the significant amount of energy Russia provides Western Europe, and the importance of Russian tourism in Western Europe.

Pribic asked Marten to go more in depth on how Russia may view its position in international politics during the lecture.

“You talk about the red line, so let me ask you: what is the red line for Russia?” Pribic asked Marten in the question and answer portion of the event.

After the talk, he said that he urges students to look at the foreign policy debates between Russia and the United States from both sides.

“In the long run, I think you have to have a coexistence [of ideas with different points of view], rather than simplifying: ‘these are the bad guys, we are the good guys,’” Pribic said.

Still, some students agreed with Peleg, saying that Marten presented both sides of the issue well.

“I thought that overall Professor Marten was fairly balanced in her approach to Putin’s foreign policy,” Kristiana Price ’17 said.

Geraldo Neto ‘15, who also attended the lecture, said that one of the most interesting parts of the lecture was Marten’s characterization of Putin.

“[I liked] how she explored the background of Putin and how that can better inform…how we understand his unpredictable actions,” Neto said.