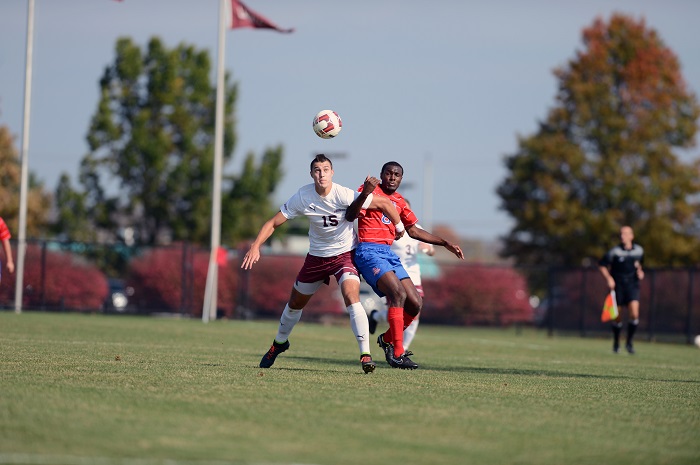 Junior Eric West boxes out his opponent for a header during last week’s game against Bucknell. Photo Courtesy of Lafayette Athletic Communications

With a strike towards net in the 36th minute, the Bucknell Bisons stripped any hope from the men’s soccer team on wednesday afternoon. A 2-0 loss puts the Leopards at 1-6 in the Patriot League, eliminating them from playoff contention.

Head coach Dennis Bohn, a man with a history of success in the program, has no doubt been faced with his share of frustrations watching his team struggle to find a rhythm.

“We haven’t been able to find the consistency for the entire team,” Bohn said. “Whether it is defenders playing well on the same day that our midfielders are possessing, or when we get a goal we give up two. It’s frustrating because we do enough to stay in the matches but for some reason haven’t had that consistency. What I’ve been harping on with the players is just having everybody put it together on the same day. We can’t have one piece of our machine not working.”

Bohn understands perfectly well that winning in the Patriot League isn’t always a result of the hard hours put before the season and during practice.

The three-time Patriot League winning coach only has one thing in mind – move forward, and grind.

“One of my favorite words in life is ‘grind. In Patriot League athletics we’re not in some big time conference, we don’t necessarily have a ton of luxurious resources, and in order to be successful like I feel like I’ve been, I think we’ve always just taken the mantra of ‘no excuses’ and just keep grinding” Bohn said. “And whether that be from game to game or season to season, you don’t have time to feel sorry for yourself or dwell in the past. Just keep pushing your players, keep urging them to stay motivated and get better and keep working as a coaching staff. In order to be good in this league you have to grind, get your hands dirty and our players need to understand that as well. And they do, they work hard. But there’s no doubt based on our results that you are what your record is, and we have to do better.”

As a result, adding depth to the roster has had surfaced as a priority.

“I think in order to have a consistently successful program, especially after the disappointment over the last year and a half, is that there has to be more competition and guys have to get better or we have to try to continue to bring in players who can possibly replace them,” Bohn said. “There’s got to be a motivation for the current players to want to improve, but we as a coaching staff also have to get the best players we can find. When you keep it simple and think ‘better and better,’ then you get a better program and a better team.”

Adding competition for a resource-scarce Leopard program in recent years has come from all angles.

Senior third-string goalkeeper David Root walked onto the team in his Junior year, adding depth to a roster that had seen current starting goalkeeper Sandy Leavy go down with an ACL injury.

Root knew fully well that joining the Lafayette soccer program was a decision loaded with a commitment level that rivals even the best soccer programs in the country, and expectations are always kept at a rigorously high level.

“Transitioning from an average college student to men’s soccer was one of the hardest things I’ve ever done,” Root said. “Physically, our team has one of the most demanding fitness tests in the country and trying to prepare for that was a full time commitment. I ended up dropping more than 30 pounds from my sophomore year to my playing weight now so that I could get faster and more mobile. The time commitment was even a more difficult adjustment. You never know how much time you have as a non-athlete until you try and manage games, practices, lifts and meetings on top of it.”

This culture that Root walked into has been a trademark of the Leopards since Bohn first headed up the program, and it has produced fantastic results in his 13 year tenure.

With this season and the last as perfect examples, even the best methods sometimes can’t separate you from the pack.

“The [Patriot League] talent level team to team is so similar and it’s a commitment to the small things that make the successful teams stand out,” Root said.

With so little time and expectation left in the season, it’s up to the team to grind it out.

“We try to move on quickly, we try and learn from our mistakes and continue to focus on the next game and whatever the next situation that challenges us is,” said Bohn. “The kids know our tradition, and there’s a lot of pride. There’s going to be no ‘quit’ in this group – that’s for sure.”