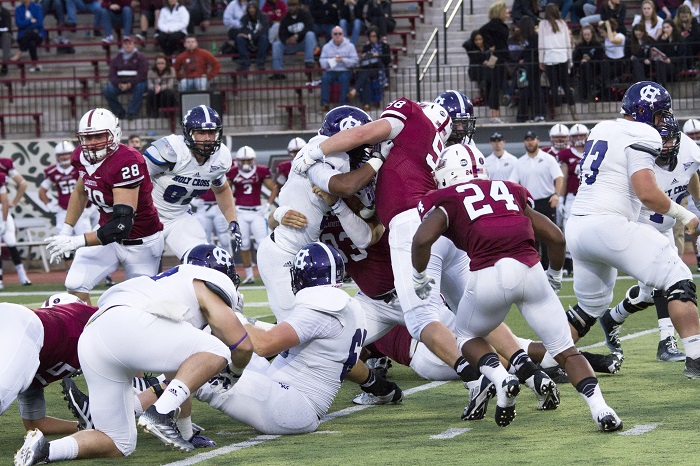 Homecoming festivities were spoiled for the Lafayette football team on Saturday when the team went down to the Crusaders by a score of 24-14. The Lafayette defense suffered, allowing 291 yards on the ground and 135 yards through the air. This is the fourth time this season that the Leopards have allowed more than 200 yards on the ground; the team is 0-4 in these bouts. With Holy Cross in the rearview mirror, Lafayette must use this week to prepare for the high octane run game of the Bucknell Bison that’s led by sophomore halfback CJ Williams, who ranks tenth in the FCS in rushing yards per game with 136.

Last week, quarterback Pete Pujals of Holy Cross was able to execute the read-option to perfection against the Lafayette defense, gaining 123 yards on the ground. Not only did Pujals lead the Crusaders offense on the ground, but also completed 9 of 15 passes through the air for 135 yards and a touchdown. The Holy Cross offense also succeeded in committing no turnovers.

“We need to work on the interior lines on both sides of the ball [for Bucknell],” head coach Frank Tavani said. “We lost to the type of football that I believe in and want to win with and that’s running the football, controlling/stopping the run, and not committing turnovers.”

The Crusaders were also able to overcome the Leopards’ strongest defensive suit: third-down defense. Prior to Saturday’s game, the defense ranked first in the FCS in third-down defense, allowing opponents to convert on just 22.4 percent of third-down opportunities. The defense allowed Holy Cross to convert 9 of 18 opportunities. This allowed the Crusaders to control the pace of the game and dominate the time of possession. Holy Cross touched the ball for 38 minutes compared to Lafayette, who just had the ball for just 22 minutes of offense.

This past week was also sophomore quarterback Drew Reed’s first game back from injury. Reed went 19 for 33 passing for 192 yards to go along with two touchdowns. However, Reed threw two interceptions on the day, a problem that has plagued Reed this year.

Besides the turnovers committed, the offense has struggled to match their success last year through the air.

“I think it’s a mixture of things from me, to the receivers, to the offensive line,” Reed said. “There’s not one thing that you can point at and say there’s your problem. I think some of the guys are struggling with their confidence because you see them in practice making great plays and you wonder on Saturday where’s that at.”

Bucknell running back CJ Williams has established his dominance this season running the football and look to exploit the Leopards weak run defense on Saturday. If Lafayette wants to win, then they will have to shift their focus this week to stopping the run. Bucknell also ranks 14th in the FCS in run defense; if Lafayette is not able to establish a ground game against this tough Bucknell defense, then Reed will have to channel his inner self from last season by minimizing turnovers and putting points on the board.

“It’s also frustrating being on the sidelines as much as we are,” Reed said. “That falls directly on our shoulders; we have to convert on third downs early on to keep our defense off the field.”