A virtual start to the college journey: A look into the experiences of the class of 2024 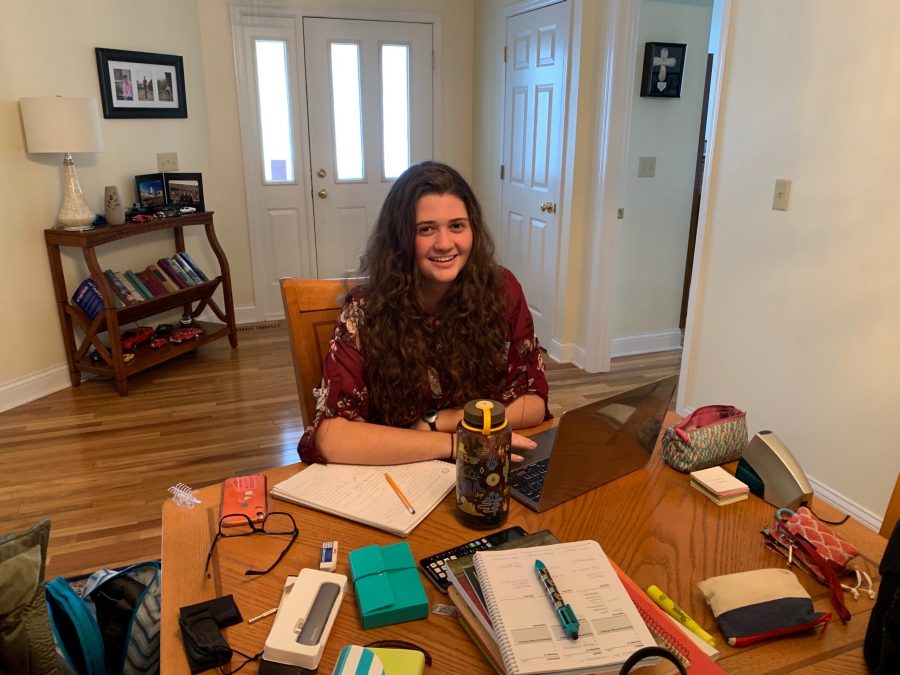 Many Lafayette students have looked forward to college for as long as they can remember. The class of 2024, like every class before them, may not have known exactly what to expect in their first semester – but they probably did not expect it to take place in their dining room.

After the college announced on July 22 that the fall 2020 semester would be virtual due to safety concerns regarding the COVID-19 pandemic, many upperclassmen students had to imagine a semester without late nights at Skillman library or afternoon chats with friends on the quad.

First-years, on the other hand, did not even know what they would be missing out on.

The class of 2024 has instead spent endless hours in front of a screen, taken Zoom classes in all hours of the night due to differing time zones, attempted to make friends through a Facebook group and experienced isolation and anxiety in an already-stressful season.

On the bright side, this class will always have something to bond over.

The transition from high school to college-level classes is generally a challenge, whether it is in-person or virtual. Larger workloads and last-minute cramming caused by procrastination are still ever-present. For the class of 2024, the academic transition may have been intensified by its stark contrast to the spring of 2020, when nearly all high schools in the country closed for the last few months of the school year, and seniors found themselves without a steady schedule and workload.

Joy Herrera ‘24 recalled having around one Zoom call each week and optional assignments by the end of her senior year of high school. To go from that to daily Zoom calls for an hour and fifteen minutes at a time was “big change,” she said.

“[College classes] were full-speed ahead right away, which was surprising,” added Olivia Bamford ‘24.

The nature of the virtual class format has presented additional challenges for some students, especially for those living far from Easton.

Tanushree Sow Mondal ‘24 is taking classes from her hometown in East India, meaning she is nine and a half hours ahead of Eastern Standard Time, which the college functions in. She said her classes do not go past midnight her time, but for club meetings, town hall events and college-sponsored talks, she often has to stay up until late in the morning. On Mondays, her percussion ensemble class takes place from 4-5:30 a.m. for her, meaning she does not go to bed until afterward.

Rachel Auerbach ‘24 said that she does not feel as comfortable asking questions in class over Zoom, where classes are made up of many students across all grades. For her, this makes opportunities to get help from her peers and professors harder to come by.

Herrera added that she takes her Zoom classes from her living room, which becomes difficult when her parents or brother walk in and out of the room or have conversations nearby.

Besides academics, one primary focus among first-semester college students is typically the accumulation of new social connections, through group projects, club meetings, dormitory floor gatherings or on-campus activities. Unsurprisingly, without being face-to-face, the social capabilities of a virtual semester are restricted.

For some, social media platforms such as Instagram and Facebook have been the key to making connections with classmates.

Emma Chen ‘24 said that Snapchat is her main form of communication, which she described as a “really effective way of meeting people.”

Others have turned to virtual club meetings for social interaction.

Sow Mondal said she has made most of her friends through the International Student Association (ISA) where she can connect with other students who are in various countries (and time zones) around the world.

Matt Kirkman ‘24 and Meredith Forman ‘24 attributed the ultimate frisbee club team with facilitating opportunities for the first-years to get to know each other, all without a single frisbee in sight.

And for some first-years, socializing through Zoom has led to friendships on its own.

Forman met Lisa Green ‘24 on a Zoom call in March, and they were then added to a group chat that also included about ten other incoming first-years. The group has kept in touch since and has even met up in person twice this semester.

“That’s really how I learned that I wasn’t alone,” Forman said.

However, everyday life for these first-years is not always so interactive.

“The worst part is just the monotony of it all,” said Bamford, who added that the most spontaneous thing she could do in her suburban location is to “get in [her] car and go to Starbucks or something.”

Herrera joked that after her virtual classes, she “take[s] a break from the big screen [her computer] by looking at the small screen [her phone].” In a digital semester, both academic and leisure ventures seem to be increasingly linked to screen time.

Schaus pointed out another downside for her remote semester: “Meal prep three times a day!” Evidently, the college’s dining services are being missed by students who have yet to eat a single meal on campus.

Forman, who rented an office space for the semester where she spends the majority of her day, explained that she covered the wall behind her with Halloween decorations to create a background for her Zoom calls in order to not let fall, her favorite season, pass her by.

And speaking of Zoom, every first-year interviewed agreed that “Zoom fatigue,” the feeling of exhaustion after participating in numerous video calls in a day, is “100 percent real.”

“It’s just been really depressing sitting alone all day…even though we’re on Zoom, it still feels so isolating,” Forman said.

With a season of pandemic concern and election unease, the fall of 2020 has also taken its toll on some first-years’ mental health.

“I definitely have been super anxious and overwhelmed,” Auerbach said. “I think it’s a difficult time to be a student just because there’s so much happening in the world that it’s hard to sit down and write a paper.”

Green added that the anxiety about contracting COVID-19 and unknowingly infecting her family members has been “overwhelming” at times.

So when the college announced last Tuesday that all students would be invited back to campus for the spring semester, there was a general consensus of excitement among first-years who could officially start preparing to live at Lafayette for the first time.

All except one student interviewed said that they plan on coming to campus next semester as of now. One undecided student cited the high cost of a semester that may entail taking virtual classes from a dorm room as their reason to potentially stay home again.

Schaus explained that she was most excited for “spontaneous adventures” upon returning to campus. Kirkman invoked “good vibes all around” when describing what he imagines campus will be like.

“I can’t wait to know what people are talking about when they reference stuff [on campus],” Green added.

Even upon arriving on campus, the class of 2024 will still have their own unique set of challenges as a result of a semester of virtual interactions.

“I’m worried with masks, am I going to actually recognize [people I have met on Zoom]?” Schaus said. She also noted that she has used Zoom’s feature of displaying everyone’s names under their faces as a crutch to learn their names herself.

Chen had a different concern in regard to seeing people in person for the first time: “I’ve been told that I look very different on Zoom! I think I look shorter in person.”

And as always, the possibility of homesickness and isolation in their first time living away from home is a concept some first-years are still preparing for.

Auerbach said that the extra semester with family may have “exacerbated” the process of saying goodbye, therefore possibly making it harder in January.

For other first-years, potential homesickness is less of a concern.

Chen described the fall as an extra, unexpected semester to spend with family that should make saying goodbye easier.

“In terms of homesickness, I think it is going to be a lot easier because a lot of us want to get the hell out of our house,” Forman added.

No matter what the spring semester may look like, for the class of 2024, this fall may have been one season they could virtually never forget.