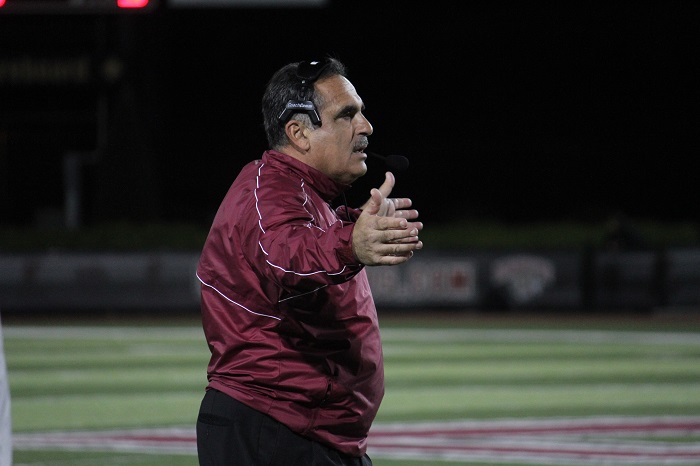 Head Coach Frank Tavani looks onto the field in dismay during a game this season.

With the season winding down, the Lafayette football team has failed to live up to its early season promise. The team, with a record of 3-6, has no chance of winning the Patriot League or making the playoffs. The only thing left to play for it seems is the Lafayette-Lehigh rivalry game just two weeks away.

The team’s disappointment so far may be due to the teams injury ridden and faltering offense. Another view might be that the Leopards had a strong strength of schedule, facing three top 25 teams this season. Or perhaps it’s just that last season was a mere fluke.

This season the offense has faltered, but the defense seems to be doing its part so far this season, allowing its last three opponents to just three scores a piece. The Lafayette defense is 13th in the FCS in third down defense, allowing its opponents to score in just 30% of third down opportunities. This success may be due to the new defensive system implemented by first year defensive coordinator Art Link.

“That’s coach Link’s philosophy…he want’s to keep teams behind the chains and force long third down situations so we can bring pressure,” sophomore defensive back Draeland James said. “The first game of the season we blitzed 80% of the time on third downs; he likes an attacking style of defense this way the quarterback doesn’t have time to make a decision.”

Along with the defense, the Lafayette special teams have showed great success this season, ranking second and first in the Patriot League in kickoff return average and punt return average respectively. Special teams coordinator Doug McFadden interned with the Cleveland Browns this summer during training camp and their first preseason game. McFadden’s newly learned schemes might be the source of Lafayette’s success.

“Coach [McFadden] has put the best athletes out there,” James said. “Our returns have done a good job getting down field and we’ve worked our technique and blocking too. Our returners like JR [senior Jared Roberts] have done a wonderful job of making something happen with the ball. He’s brought schemes from the pros and they’ve been really effective.”

The combination of the Lafayette defense and special teams has been able to give the Lafayette offense good field positioning drive-in and drive-out. However, it offense has been unable to capitalize in most this season. Lafayette has had a fair amount of success on the ground this season, but has not been able to move the ball through the air with the same efficiency as last season.

The departure of wide receiver Mark Ross last season to graduation has certainly taken its toll on sophomore quarterback Drew Reed. Last season, Ross accounted for 1078 yards of offense and eight touchdowns. Reed’s favorite target so far this season has been Scheuerman, who has been a threat out of the backfield, accounting for 433 yards and three touchdowns through the air. Besides Scheuerman, the wide receiving core is inexperienced, including sophomore Tim Vangelas, freshman Matt Mrazek, junior Brian Keller, and senior Justin Adams, who returned form injury late last season. Senior Demetrius Dixon has had the most experience playing the position, but has accumulated so far less than half of the yards and touchdowns that he had last season.

With Colgate and Lehigh ahead, the offense may have an opportunity to showcase their untapped potential. Colgate ranks 80th and Lehigh ranks 117th in the FCS in pass defense, allowing 230 and 300 yards per game. In order for the team to finish strong this season and capture the 150th meeting with their rivals Lehigh, the defense and special teams will have to keep performing at a high level and the offense will have to take advantage of the weak defenses ahead.