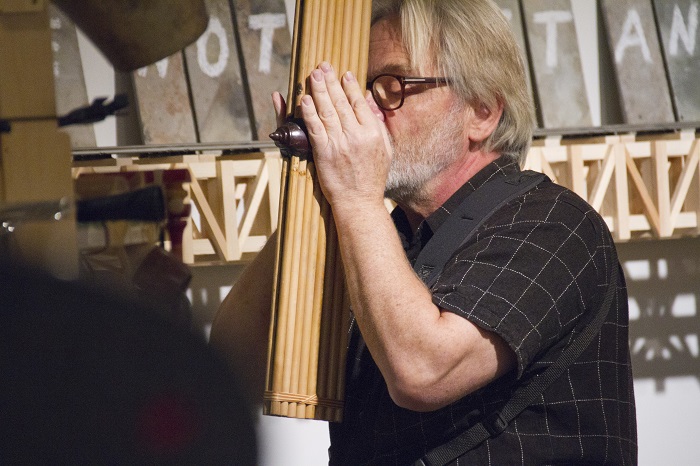 The story of the last surviving pigeon, Martha, was told by Michael Pestel and Carrie Rohman in the Williams Art Center last Tuesday, using music and dance.

“[It is about] the resuscitation of something we don’t know, like the sound of the passenger pigeon,” Pestel said. It is another way of “resuscitating memory.”

The performance of M “focuses on subjects like extinction.”

It started off with Rohman spinning on a pedestal in a large wooden bird cage, holding a large wooden branch. There was a camera on top of the cage, which showed a bird-eye’s view of the inside of the wooden cage on a television screen in the center of the room near the entrance. On another screen, there was a video of Pestel playing the piano near a body of water.

Simultaneously, he recreated bird calls on many different instruments, such as one he calls an upright harp “liberated from the keys of a piano” and a recorder taller than him that is 4 octaves lower than a normal handheld one. It had various other instruments on it, like a chime made out of keys. He also played a contralto clarinet in B flat to recreate birdcalls, swung a wooden instrument to recreate sounds of wind, and made many more unconventional instruments.

As Pestel plays, Rohman stepped out of the cage and started to dance, starting off slowly, then picking up as Pestel’s musical accompaniments become more dissonant, loud, and picks up in tempo.

At the peak of the performance, Rohman and Pestel both drew on the chalkboards provided. Pestel starts making lines slowly and then quickly began to create more “scratches” on the board using various colors of chalk. Rohman, on the other side of the room, drew serenely. The performance ended with Rohman stepping back into her cage and onto her spinning pedestal while Pestel played various sounds, including bird calls, on his contralto clarinet.