Change your world, not your body 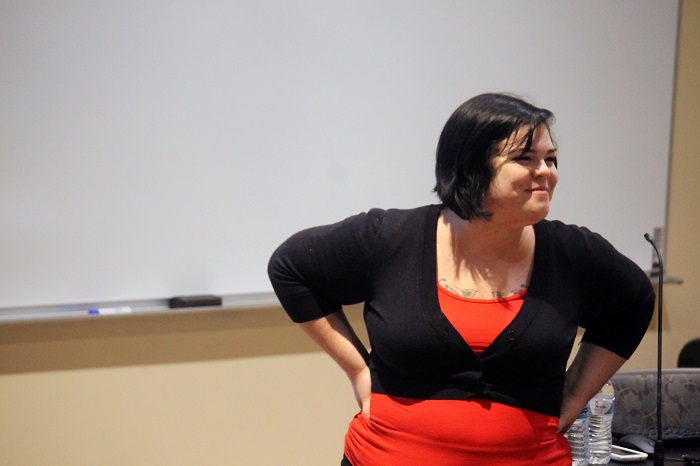 Jes Baker, owner of the blog “The Militant Baker”, paid a visit to Lafayette last Wednesday to talk about an issue very close to her heart, and one which she feels goes ignored by the larger population: the issue of body love.

Pausing only to take an “Oscar style” selfie with the entire audience, Baker immediately began to dispel common myths about body image and self esteem, such as how only five percent of women fall into “the media’s standard of beauty.”

“I think that body image is one of the top five things we all need to be working on…” she said. “[Eighty-one percent of] 10-year-olds…are more afraid of getting fat than they are of war and losing their own parents…that’s messed up!”

Highlighting a formidable list of statistics about body positivity, such as a study demonstrating that only four percent of women thought their body was naturally beautiful, Baker struck a very harsh tone, and criticized American society for producing an environment where self-hate is far too common.

Throughout her presentation, the blogger consistently returned to one central idea: “We can change the world without changing our bodies.”

She talked about several campaigns that she had done in the past, such as in 2013, when Abercrombie & Fitch made controversial comments about how they do not carry plus-sized clothes, because they cater to “cool kids.” Baker launched “Attractive & Fat,” in which she posed with her boyfriend in parodies of Abercrombie & Fitch advertisements to highlight how “cool kids” and beautiful people are not just skinny models.

She talked about how, in the media, fat people are often portrayed as “Cultural deviants…embarrassments to society, and as your worst nightmare.”

“People would do anything to a change their bodies to avoid ending up like me,” she said.

She discussed making a decision in her life, “…as black and white as can be…I had to make a decision to love my body or hate my body.”

The talk in general was “inspirational,” according to Alexis Grandy ’17.

“I thought she touched upon a lot of really important things,” Grandy said. Affirming that she learned a lot, Grandy highlighted a particular point of the presentation, in which Baker gave a challenge to the entire Lafayette student community.

“I want you to think of one thing you love about your body or one affirmation, my personal favorite one is ‘I am okay’…write it down and put it in the place where you have the most negative thoughts..for me it’s the mirror,” Baker said. “Read it out loud every time you see it. Replace negative words with positive ones.”

She concluded by urging people to feel comfortable in their own bodies, and to not let a bad day discourage you.

“Allow yourself to fall down,” she said. “Be okay with it, brush yourself off, and give the media the finger…the goal is to have more good days than bad.”

Baker chose to love her body, and asserts that even in her darkest hours, she is happier loving her current body than she was when she was skinnier and less positive.