Upper closing for renovations before end of semester 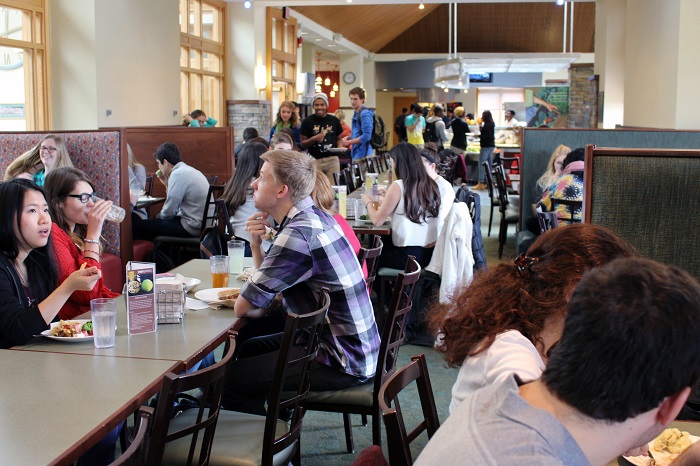 The new proposed scheduling policy is intended, among many things, to ease congestion of dining halls during the lunch hour.

When students return from Thanksgiving in December, they will not be able to eat at Upper, due to renovations on the dining hall.

Before classes end on November 24, Upper will close down for renovations on everything from the carpets and lighting to the food stations and seating options.

Architectural changes, including more doors into Upper and seating along the windows with charging stations. Bon Appetit will also use the opportunity to introduce new or more efficient food services, such as a burrito bar and a more accessible sandwich station.

The dining hall will be closed for the last week of classes and through finals week, in order for the renovations will be finished in time for the start of the spring semester.

Some students feel that other, already crowded dining halls may struggle to accommodate the students who would normally go to Upper.

“As someone who doesn’t go to Upper much, I’m mostly worried about the inevitable overcrowding at Lower now,” Max Jones ’15 said.

The college and Bon Appetit have prepared several ways to accommodate students in the other dining halls on campus.

“It will be crowded,” Dean of Students Paul J. McLoughlin II said. “I absolutely know that it will be, because how can it not be. If it weren’t, we wouldn’t have all these dining halls anyways.”

“We’ve thought about in every situation how we can increase service or hours to accommodate that one week where we only have one dining hall instead of two,” he added.

For example, hours at Gilbert’s will be extended to the normal hours of Upper (until 9pm) from Monday to Thursday, Marquis will be open over the full weekend, and Simon’s will open an hour earlier. The options for meal exchange will grow at Gilbert’s and Lower, while Skillman Cafe will also offer meal exchange at lunch and dinner. Disposable to-go containers will also be offered at more locations.

The renovations to Upper are part of a long process of renovating the main dining halls on campus. The ideas for renovating dining halls are a couple of years old, according to McLoughlin.

“The selection of Bon Appetit as the new provider, which started last July, a year and half ago then sets in motion a lot of things,” he said. Architecture plans for renovating Upper came towards the end of the summer.

There are currently no plans to renovate Skillman Cafe or Simon’s, according to McLoughlin.

Jade Saybolt ’16 was invited to represent the student body on a committee beginning last spring with architects, plant operations, dining services and student involvement representatives to determine the best way to proceed with renovations for all four dining halls. This committee also toured other colleges like Kutztown and Muhlenberg to consider other ideas.

“Lower being done first definitely helps, because Lower has more space options now,” Saybolt said. “The fluidity within Lower has also improved so students who want to grab and go will stay on the right side, but if students want extra time getting what they want, they go in the left side.”

Historically, according to McLoughlin, Marquis has shut down after the first week of December, but will now be kept open. For this reason, the Bon Appetit staff that would normally work in Upper can be reassigned and do not have to be laid off.

The majority of the funding for the renovations comes from Bon Appetit itself, according to McLoughlin.

“A part of becoming a long term dining services partner to us is an investment on their part into our facilities both for them and for us,” McLoughlin said.