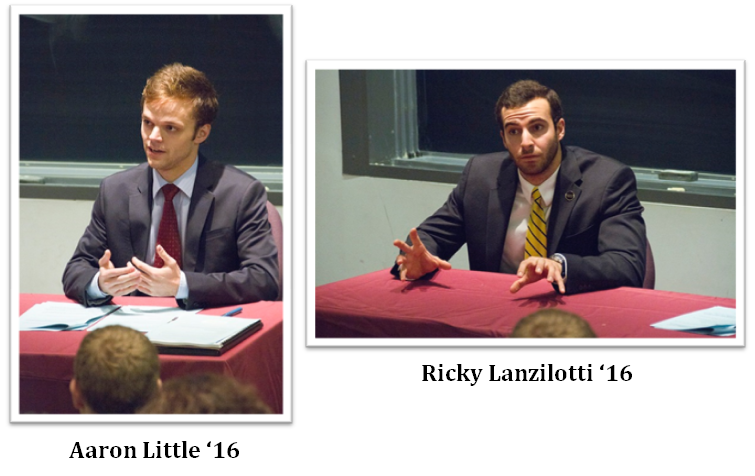 Photos by Hana Isihara ‘17
Candidates discuss their plans to be instituted if elected
Student government presidential candidates squared off in a debate on Tuesday, discussing their qualifications for the positions and plans to respond to various issues at Lafayette.

In front of about 40 students and faculty members, Ricky Lanzilotti ’16 of King of Prussia, PA and Aaron Little ’16 of Lafayette, NJ advocated their views in the hope that they would be elected in the polls that close tonight.

When asked about his top initiative, Little detailed his plans to revamp the college’s drug and alcohol policy, because he feels that it is the issue that affects students the most and on a day-to-day basis.

“We need to engage in dialogue,” said Little, a biology major. “We need to collect hard data and feedback to bring to the administration in order for there to be a change.”

Lanzilotti wants to focus on enhancing communication between the Greek community and the administration, saying that many students feel blindsided by the administration’s decisions when they are handed out via email.

“I also want to create a better application process for new living communities, both Greek and non-Greek groups,” said Lanzilotti, an international affairs major. “I feel that this will create a greater sense of campus inclusivity.”

Each candidate believes their experience in student government and interacting with students best qualified them for the position.

“I believe I’m the most passionate person for the job and I feel my goals are the most attainable,” said Lanzilotti, after detailing his campus involvement and leadership positions.

Little described his “Big Change” platform that includes updates to the alcohol policy and a more responsive student government.

“I have a relationship with administration that will facilitate making the necessary changes here at Lafayette,” Little said.

Moderated by current Student Government Vice President Ryan Monahan ‘15, the debate brought up topics such as Greek life, inclusivity on campus, communication between students and administration, dining services, and their chosen running mate. Lanzilotti is running with Scott Bradley ’16 and Little is running with Caroline Bitterley ’17.

“I wanted someone who would best support me and my goals. [Bradley] is my toughest critic and I feel that’s important,” Lanzilotti said.

“[Bitterly] has experience with student government and with committees that I didn’t serve on,” said Little. “She’s affiliated [with greek life] and I’m not. I thought she would be a great compliment to me.”

Following the debate, candidates fielded questions from audience members. The questions revolved around elaborations of the candidates’ platforms, and specific remarks from earlier debate questions such as alcohol policy, lack of accessibility to certain buildings, and campus inclusivity. One audience member asked each candidate what their biggest achievement was as a member of student government.

“I am very proud of Derby Day,” Lanzilotti said. “It went so well. We had around 750 people last year and are hoping for over 1000 this year. We are teaming up with Multicultural Affairs to improve the inclusivity of the event.”

“Student government used to have selves lined with binders full of documents,” Little said. “If a club asked us to find their constitution so that they could review it, we weren’t able to give it to them because of how long finding it would take. Now it’s all organized in one place.”

For their closing remarks both candidates reiterated the main points of their platform and why they would be the best person for the presidency.

“I’m working toward inclusiveness, feedback, greek and administrative communication and transparency […] every single vote matters and I need yours,” Lanzilotti said.

“I fell in love with Lafayette when I first visited,” Little said. “I guarantee that that feeling has not gone away. This passion is what motivates me to be here.”

After the debate, audience members reflected on their experience viewing the debate.

“I thought the debate was a really good way for the candidates to get their points across and express their personalities,” Mackenzie Gammons ’18 said. “It was my first time witnessing a debate so it was really enticing to see how passionate the candidates were about their platform ideas.”

Voting polls will close on Friday at 8pm and election results will be available the following day.