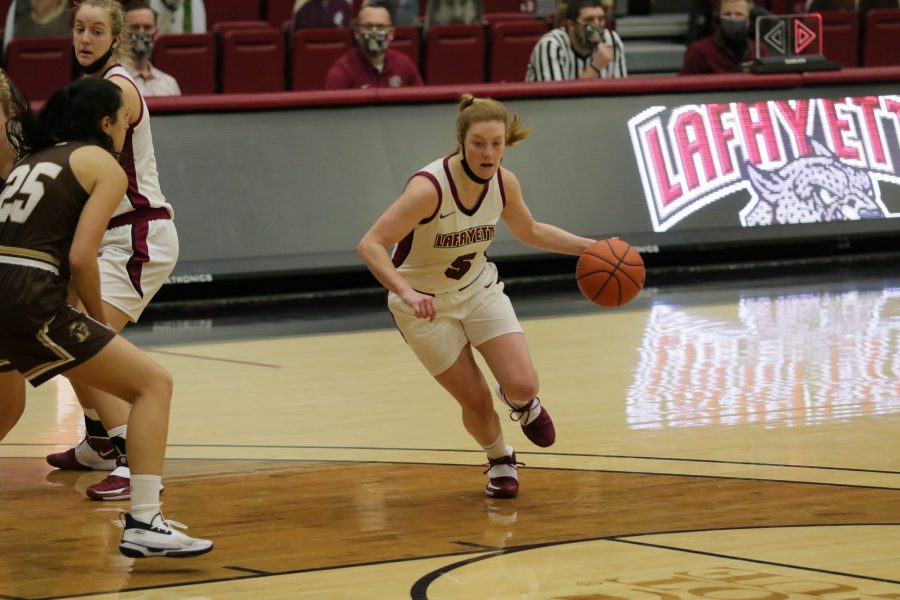 Senior guard Drew Freeland led the team in scoring in both games against Lehigh. (Photo courtesy of athletic communications)

The Lafayette women’s basketball team dropped a pair of close games to rival Lehigh last weekend to kick off the opening series of an unusual spring season. The Leopards lost 81-75 in overtime on Saturday, Jan. 2, and then fell 73-65 the following day as the Mountain Hawks earned the weekend sweep.

Despite the ongoing pandemic, the Patriot League approved a 16-game regular season for men’s and women’s basketball programs in November, and recently announced plans for most fall and spring sports to resume play in the coming months.

With most sports, including basketball, the Patriot League has grouped teams into regional mini-conferences to reduce travel and risk of transmission. Each team competes against two other schools in the mini-conference; Lafayette is grouped with Lehigh and Bucknell. Teams also play two games against the same opponent on Saturday and Sunday with the same goal of reducing travel.

The 2021 season opener kicked off at home in Kirby Sports Center last Saturday, and the Leopards ran out to an early 9-4 lead before Lehigh tied the game at 14-14 at the end of the first quarter.

At the half, Lafayette was up 36-31 and held the lead throughout the third quarter. The Leopards led 44-35 midway through the third before the Mountain Hawks began to claw their way back into the game. Lafayette carried a slim four-point lead into the fourth quarter.

But Lehigh closed the gap about four minutes into the fourth, bringing the score to a 57-57 tie which was followed by a temporary three-point lead for the Mountain Hawks until senior forward Natalie Kucowski converted a three-point play, and the game was again tied at 60-60.

The teams traded baskets as the fourth quarter came to a close, and an overtime period was necessary to break a 68-68 tie. The Mountain Hawks outscored the Leopards 13-7 in the extra frame to earn the win.

Kucowski scored 16 points and grabbed 21 rebounds, just two shy of her career-high, and senior guard Drew Freeland led the offense with 17 points. Sophomore guard Jess Booth had a career-high 13 points coming off an injury which sidelined her for most of her freshman season. Sophomore forward Reilly Campbell also had a career-high eight points, while junior forwards Makaila Wilson and Naomi Ganpo chipped in eight apiece.

Freshman guard Makayla Andrews made her collegiate debut on Saturday, racking up 13 minutes of play on the court and getting a rebound.

“In college you have to pay attention to details a little more than you do in high school,” Andrews said. “We watched film, went over Lehigh’s plays, and really tried to focus on knowing where their shooters are at all times and crashing the boards and making sure we out-rebounded them.”

Sunday’s game at Lehigh’s Stabler Arena proved to be just as back and forth as the previous contest. The two teams traded leads throughout the first half, and were deadlocked at 37-37 to start the third quarter. From there the Leopards faltered.

The Mountain Hawks gradually built a 10-point lead in the third quarter, which would prove to be too much to overcome. The Leopards never got closer than eight in the game’s waning minutes, giving Lehigh their second victory in as many days.

Kucowski’s 15 points in the game brought her career total to 1,215 points, making her 10th all-time in Lafayette’s record books. Kucowski also grabbed 13 rebounds, marking her second double-double of the season, and 45th of her career.

Freeland also found her name in the Lafayette record books after Sunday’s game as her four baskets from beyond the arc brought her career total to 113 made three-pointers, good for eighth all-time. Freeland led the team in scoring with a combined 34 points over the weekend series.

Also on Sunday, Booth chipped in eight more points and freshman forward Ashley Evans made her college debut with three rebounds and three assists in eight minutes of action. Andrews’ second collegiate game saw her notch a career-high eight points in the loss.

“In my very first game, I was a little more nervous, but once I worked out the kinks in the second game, I felt I played much better,” Andrews said. “It was nice to get back into the rhythm I know I can play at. It made me feel like I was contributing to the team.”

Next up for the Leopards is a weekend home-and-home series with Bucknell on January 9 and 10.

“We’re watching film and really going over how they guard their opponents and making sure we know how to score and break down their defense,” Andrews said.

Lafayette will host the Bison on Saturday at 2 p.m. before traveling to Bucknell for Sunday’s game at 4 p.m.