All Patriot League sports will resume this spring, as conference announces ambitious schedule for competition 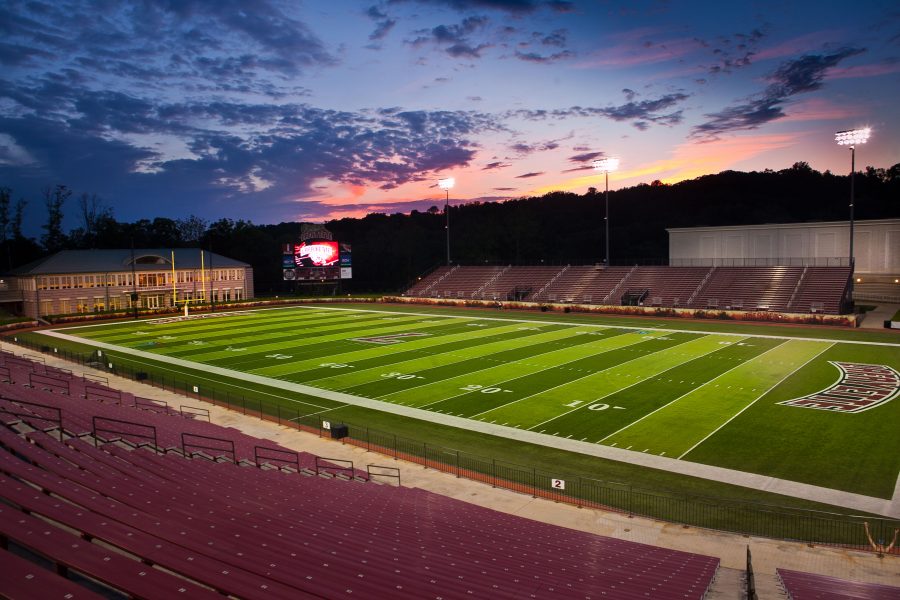 Once competitions begin, student-athletes will be tested up to three times a week. (Photo courtesy of Chuck Zovko)

As Covid-19 cases and deaths hit record highs nationally, the Patriot League has announced an ambitious plan and schedule for resuming all athletic competition this spring.

All fall and spring team sports will return to play in either late February or early March, with most teams playing shortened, league-only seasons and most individual sports hosting championships in April or May.

Given the cancelation of all fall sports in 2020, the Patriot League has decided to allow fall sports to compete in 2021, albeit with an adjusted schedule. The announcement said that detailed league schedules would be made available “at a later date.”

Having all fall and spring sports play simultaneously will present significant logistical and scheduling challenges, with limited field space and the need for social distancing across athletic programs.

It is also unclear how the league will respond to outbreaks within teams or across athletic programs, and the corresponding impact on the schedule. No comprehensive information regarding athlete testing or any sport-specific mitigation strategies has been released.

Virus cases are still on the rise across the country, while Pennsylvania lags behind most other northeastern states in the percentage of the population that has been vaccinated.

The men’s and women’s basketball teams are already a few weeks into their spring seasons, with the playoffs set to begin on March 6 and end on March 14.

The Patriot League will also offer competitive opportunities to men and women indoor track programs in what’s being deemed the “Patriot League Challenge.” This will take place at four different sites on February 27 and 28, with Lafayette traveling to Bucknell.

The specific regulations and plans vary from team to team, but both the Patriot League and the college have said they are prioritizing one main thing: players’ safety.

“We are doing everything possible to support our coaches and student-athletes,” said Lafayette’s athletic director Sherryta Freeman. “Our primary focus is ensuring a safe and healthy environment for everyone involved. Next, we want to ensure our teams are prepared to achieve success.”

However, the conference has not yet released detailed guidelines for managing surges in cases among sport programs, and neither has Lafayette. It remains to be seen whether athletes will have greater access to frequent testing than regular students, as has been the case elsewhere.

The league has also left a lot up to the schools; non-conference scheduling will be permitted for baseball, softball and lacrosse, but not for any other sport. Schools are also expected to schedule their own competitions for swimming and diving, cross country, track and field, golf and rowing, with the only guidance from the league being that opponents must follow “comparable health and safety protocols.”

A key variable for Lafayette during this unprecedented spring season will also be the use of Fisher Field. It has not been determined how teams will rotate the use of Lafayette’s main on-campus turf, yet conflicts seem inevitable given the nine overlapping sports taking place this spring. Both men’s and women’s lacrosse, field hockey and football use the field for home games, typically during different seasons.

“The Patriot League is providing fair and equitable schedules in terms of home and road contests,” Freeman said. “Unless interrupted by COVID-19, Lafayette teams will play their assigned schedules in their traditional venues. We have also been working to balance schedules to ensure that our teams have access to home venues for all scheduled competitions.”

Football is also set to return to action in the spring semester, with the six Patriot League teams being split into two three-team divisions. Lafayette will compete in the South Division with Lehigh and Bucknell, while the North Division will consist of Fordham, Holy Cross, and Colgate. Teams will play four total games, two against divisional opponents and two against non-divisional opponents. Noticeably missing is Georgetown, as the Hoyas decided to forgo participation in the 2021 season and prepare for the fall season if conditions allow.

The 2021 spring semester will be one for the books as nine Patriot League and Lafayette teams are set to embark on full seasons with numerous other sports playing in championships throughout the semester. But Freeman says the department, and the League, are up for the challenge.

“Our staff and coaches have been preparing for several months for our Patriot League schedules,” Freeman said. “We have been working on the logistics from the arrival of our student-athletes, to securing travel arrangements, to conducting competitions.”

“We have had standing meetings of our Emergency Action Group which has served as our COVID-19 response team,” Freeman added, noting that the group has been “instrumental in the preparations necessary for our student-athletes to resume participation.”