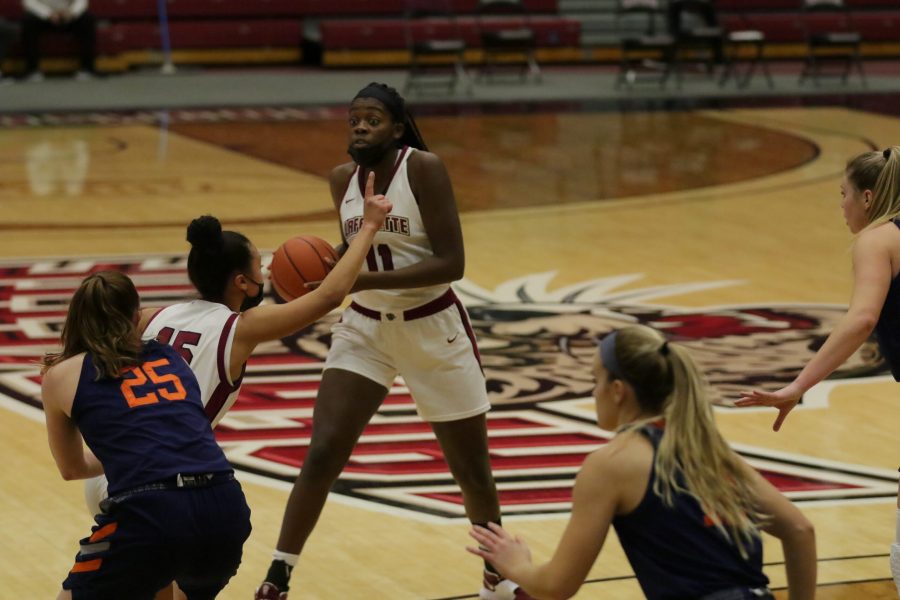 The Lafayette women’s basketball team’s record is now sitting at 0-4 for the 2021 season with this past weekend adding two losses in tough back-to-back games against Bucknell (4-0).

The Bisons took control early on in Saturday’s game at Kirby Sports Center, pulling ahead to a 13-point lead in the first 10 minutes.

Both teams scored 14 points in the second quarter, but Bucknell was still up at the end of the first half.

Lafayette had a strong push at the end of the game with junior Naomi Ganpo’s field goal from just outside the paint. Ganpo’s shot was followed by a three-pointer from freshman Makayla Andrews.

“We really focused in on knowing their personnel and making sure we defended them to take away their strengths. Our focus was pretty much on the defensive end, to make sure we were communicating, boxing out and liming offensive rebounds,” said senior Natalie Kucowski, the leading scorer of Saturday’s game. Kucowski’s racked up 17 points and 10 rebounds, marking her third straight double double.

“Throughout the majority of the game, we were maintaining defense, but I definitely think something we can do better is generating some sort of offense,” said senior Drew Freeland, who was the second highest scorer of the game with eight points and six rebounds. “[Bucknell] is very efficient, and very solid defensively and offensively in terms of turnovers.”

In the end, it was a Lafayette foul that sent Bucknell to the line for two free shots, ending the game 80-51.

The next day, Lafayette was able to gain a quick lead, but this was the only lead the Leopards were able to hold throughout the game.

“I think we did well making adjustments from Saturday to Sunday, focusing on our energy throughout the game and our defense coverages,” said Kucowski.

“Looking at the scores it wasn’t a great weekend, but I will say from Saturday to Sunday, we had a really great defensive turnaround. On Sunday we gave up a lot less points and made a lot of the corrections we were talking about on defense which was awesome,” agreed Freeland.

These corrections helped Lafayette hold Bucknell’s Abby Kapp to five points on Sunday, compared to her 24 points the previous day.

The Leopards were able to cut the point gap with a seven-point scoring run from Freeland followed by Kucowski’s eighth point of the game, assisted by senior Sydney Sabino. Sophomore Jess Booth added an additional nine points to the scoreboard on Sunday.

Coming off a timeout called by Bucknell, a Bison basket cut off the Leopard’s scoring run.

Ganpo had a standout game on Sunday, leading the Leopards with her career-high of 16 points. This was her first time this season scoring in double figures.

“In Sunday’s game, [Ganpo] did a great job of just playing the way she can and getting rebounds, finishing her shots, and bringing energy to the defense,” said Kucowski, who followed behind Ganpo on the leaderboard with eight points and 11 rebounds.

Ganpo’s 14th point of the afternoon was the final basket of the game for the Pards.

“We can always get better offensively. This weekend we struggled to score more than we did against Lehigh. So our goal is making sure we’re executing our game plan on offense and taking good shots into possession,” said Kucowski.

Turnovers proved to be the deciding factor in the game’s final score of 45-79, with Lafayette allowing 18 turnovers compared to Bucknell’s eight.

“Although we’re coming off 4 straight losses, they were against very good teams in our league that we’re typically very competitive against. It’s very early in the season and we just have to have fun and learn from it and get better,” said Freeland.

This Saturday, Lafayette will be traveling to Baltimore, MD to play against Loyola.

“We know they like to dribble drive, so we have to be prepared for that on defense. Offensively, we have to take advantage of our size and get into the paint, whether it’s in the post or guards attacking the basket, and continuing to play hard on every possession,” said Kucowski.