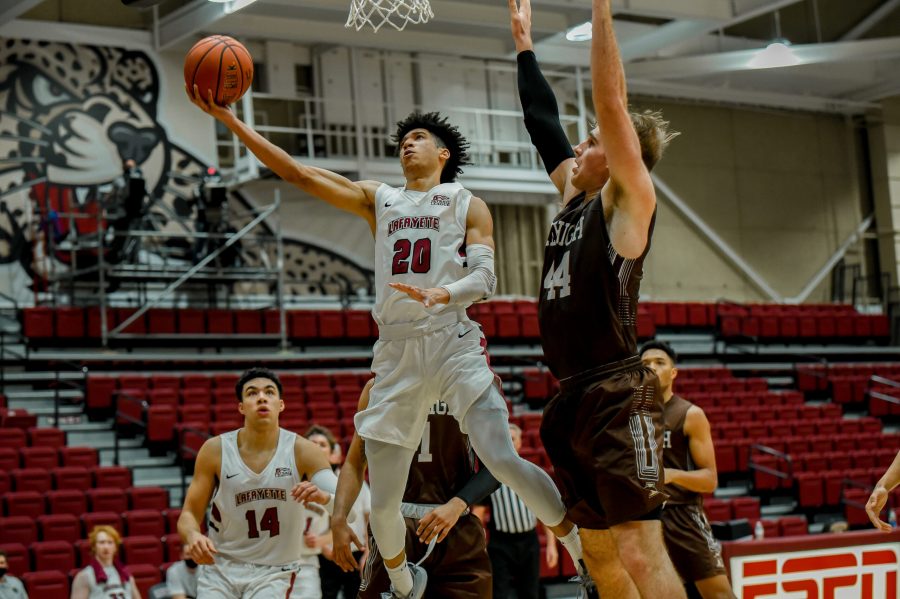 The Lafayette men’s basketball team saw their five-game win streak come to an end at the hands of Boston University this past weekend as the Terriers took both games by a score of 81-76 on Saturday, and 64-61 on Sunday.

Boston University, last year’s Patriot League conference winner, got off to a slow 1-5 start this year, but two wins against Lafayette suggest the Terriers are still a threat. Lafayette now holds a 5-3 record halfway through the season.

The Leopards fell behind quickly in the Saturday game, trailing 30-19 at the midway point of the first half, the result of a 9-0 run by the visiting Terriers. But Lafayette closed the half on an 11-2 run, tying the game at 38 points at the break.

Boston came out hot to start the second half with a 9-0 run that was interrupted by a bucket from junior guard Tyrone Perry and two free throws from sophomore forward Neal Quinn, shortening the lead to five.

After another Terriers bucket, Lafayette went on a 7-0 run to tie the game once again at 49-49, with still 11:36 to play on a three pointer from sophomore forward Leo O’Boyle. Boston gradually opened up a nine point lead over the next five plus minutes, and the Leopards never got closer than three points down the stretch in a five-point loss.

Senior guard Justin Jaworski led the team in scoring Saturday with 20 points, with classmate and co-captain guard E.J. Stephens adding 13 of his own. Perry, Quinn and freshman guard Kyle Jenkins each chipped in 12 points, and O’Boyle had five.

Boston held a 38-30 advantage on the boards, although the Leopards narrowly led in points in the paint by a 36-34 margin.

“I think the biggest thing we need to do is rebound the ball. They had second chance opportunities, that ended up giving them the win,” Jenkins said. “We fought the whole game.”

Jenkins, who tied his season-high with 12 points on Saturday, graduated last year from the Hotchkiss School in Connecticut, and has adjusted well to college hoops.

“The whole quarantine period between March and September was a really good opportunity to get in the gym and really focus on basketball with no distractions,” he said. “I think that definitely helped me get prepared as far as my body and being in shape. I think I’ve adjusted pretty well. At first, learning the offense and the whole system was a lot, but I think once I got that down, it was easy.”

Sunday’s game, also at Kirby Sports Center, saw both teams struggling to shoot the three ball as they combined for just 16 percent from long distance. As was the case in Saturday’s game, the Terriers jumped off to an early 7-2 lead before a triple from Perry cut the lead to two. Stephens hit consecutive buckets to give the Leopards a 13-12 lead, but Boston retook advantage over the next 12 minutes and held a four-point lead at the end of the half after Perry hit a step-back buzzer-beater.

Shooting woes arose for both teams in the second half. Stephens hit a step-back jumper to tie the game at 41-41 with less than 12 minutes left, but the Terriers maintained a small lead for much of the next nine minutes. It remained a one-possession game until Lafayette took their first lead of the game with a shot from Quinn bringing the score to 58-57 with just over three minutes remaining.

But the Terriers would steal back the lead on a jumper, and Boston hit some key free throws to put them up by three with 11 seconds remaining. Lafayette had the opportunity to send the game to overtime, but a trio of late three pointers would not fall. The Terriers were once again able to hold on with a three-point win and a 64-61 final score.

Co-captains Stephens and Jaworski once again led the team in scoring with 17 and 14, respectively. Perry added 13 of his own, and Quinn tallied nine.

“Even with the adversity we had, we still showed some fight,” Jenkins said. “I think that going into next week we will have extra motivation to get back on track and in the win category.”

The Leopards will look to get back in the win column as they travel to Washington, D.C., on Saturday to face American University at 2 p.m., and will be back at Kirby at 4 p.m. on Sunday.