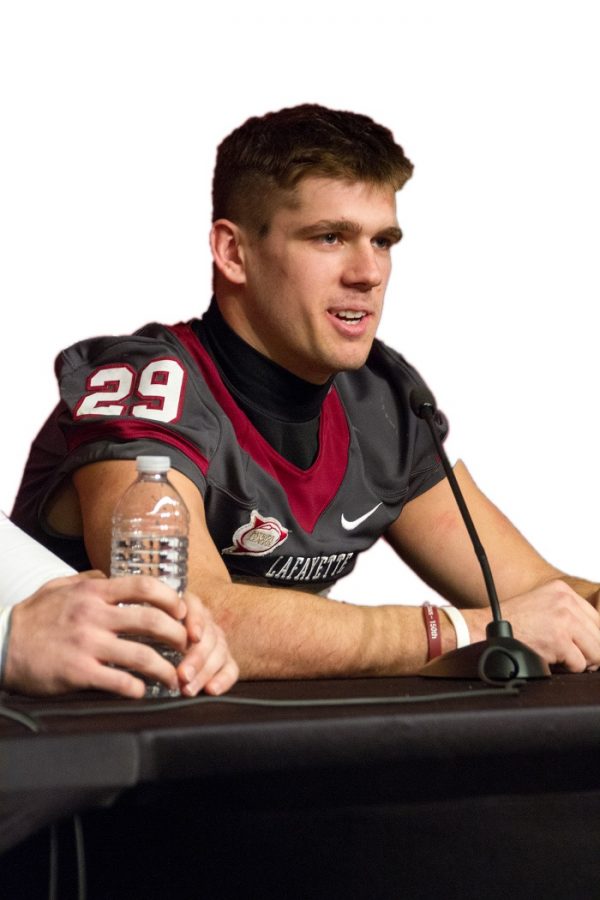 Although the Leopards did not have a chance at the playoffs at this year’s Rivalry game, the team found inspiration from another source: Tom Kirchhoff ‘93, a Maroon Club Hall of Famer who now suffers from ALS. Kirchhoff not only presented a speech to the team on Friday, but also appeared before the team prior to kickoff on game day.

“It put things in perspective for us and got our emotions moving,” senior lineman Luke Chiarolanzio said. “The speech was unreal and really emotional. It was great to know that we were playing for him. I think it helped motivate us a lot more and was one of the reasons that we came out fired up.”

In addition to the team motivation that had arisen from Kirchhoff’s mere presence, players sought motivation of their own; energy had boiled from the game atmosphere, as well as media coverage.

Senior tailback Ross Scheuerman found motivation in a game preview newspaper article bashing the running back for being beat up and sore from all of his playing this season, and seeing him as a non-threat against Lehigh.

“On game day, someone printed out the article and put it in my locker, and it fired me up,” Scheuerman said of the negative publicity. “I was already fired up for the game, but it definitely focused me even more.”

Scheuerman ended his career on the highest possible note, carrying the ball 45 times for 305 yards and three touchdowns against the Mountain Hawk defense. Scheuerman’s performance not only earned him the game MVP trophy, but also set a new Patriot League single-game rushing record. Scheuerman also earned the honors of the Sports Network’s FCS player of the week.

It was no mistake that Scheuerman was handed the ball off 45 times. The Leopards offensive game plan had been to run the ball as much as possible against a weak Lehigh rush defense.

“When you have a weapon like that you have to use him,” head coach Frank Tavani said. “If I had to run him 60 times I would.”

Besides Scheuerman being one of the biggest rushing threats in the country, the uncertainty of starting senior quarterback Zach Zweizig put a greater focus on establishing a run game against the Mountain Hawks. Starting sophomore quarterback Blake Searfoss broke is foot during the week leading up to the historic 150th meeting.

“I think with our quarterback situation, when Blake went down, we were putting Zach in the game for the first time in a year and a half, so I was pretty sure that we were going to rely on the run,” said Scheuerman.

Regardless of how the Leopards got there, they managed to oust their rivals by a score of 27-7. This 150th rivalry meeting was the quintessential way for the seniors to end their careers – on top and victorious against their biggest foe. Unfortunately for Chiarolanzio, a senior captain and offensive lineman, his rivalry experience was plagued by a season ending bicep tear that he suffered against Harvard earlier this season. However, despite this injury, Chiarolanzio lived up the experience to the fullest, ending his career on a high note.

“Being from New Jersey and being a Yankees fan, it was awesome being in the stadium and in the locker room,” Chiarolanzio said. “It was one of the biggest games that I have ever been a part of.”

“It sucked that I wasn’t out there playing with the guys against Lehigh, but at the same time you got to put the team first and try to enjoy it…and I really did enjoy it,” Chiarolanzio added. “It was one of the coolest things: watching the team win and seeing the fans go crazy. That was all good enough for me.”