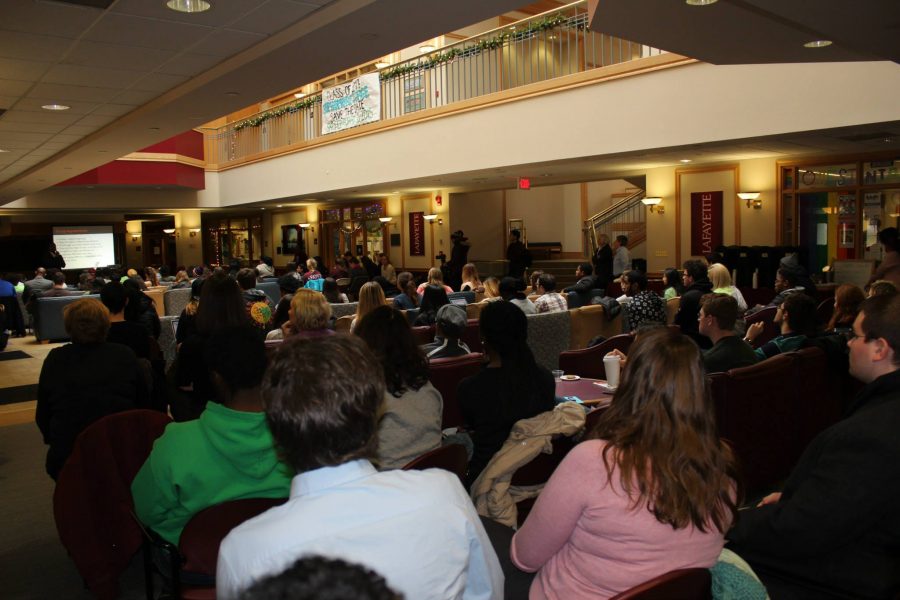 Amidst preparation for final exams, about 200 people gathered in the Farinon atrium last Monday for a forum to discuss national issues arising from the grand jury decisions in the Eric Garner and Michael Brown cases.

Students, faculty, administrators, staff and residents of Easton discussed topics ranging from the recent protests surrounding the deaths of Eric Garner and Michael Brown to race issues to police brutality in the U.S.

Dean of Intercultural Development John McKnight and the student organizers decided to host the forum to give students a place to learn and talk about these topics.

“When something is impacting the nation in such a powerful way, it is the responsibility of colleges and universities to take a moment and think about that,” McKnight said. “A lot of people were being offended that, even within their own friend groups, the topic wasn’t coming up more often, or people were responding on social media but not finding a supportive network of friends to exchange ideas with. So it was important for us to pull it together.”

“When the decision came out during Thanksgiving break, we anticipated something like a discussion,” said Association of Black Collegians Campus Liaison Ariell Christian ‘17, who was a member of the ad hoc committee that planned the event. “But when we got here it was complete crickets.”

The forum was a culmination of a week of planning after Thanksgiving, beginning with an event for people to voice their opinions about the jury decisions in the Garner and Brown cases.

“Out of that [discussion] came the need to want to do a protest or spark social awareness around issues of racism and police brutality on campus because we thought for the large part that topic had been glossed over in a lot of ways,” said Valerie Melson ‘17, who helped organize the event.

To raise awareness about the forum and the topic, they also organized “die-ins” on Friday in Marquis dining hall and Sunday in Skillman Library. A “die-in” is a method of demonstration in which they lay on the floor to protest the recent deaths.

After a brief introduction to Garner and Brown cases, the forum broke up into small groups of about 10-20 people, each led by a student facilitator.

“It’s best to have the students leading because it shows that we do care about our communities back at home but we care about the Lafayette community just as much,” said Sean Courtney, who also helped organize the forum. “We think that the message would be received a lot better from students.”

“The Lafayette community has this idea of ‘us’ and ‘them’ when it comes to culture and things that are culturally backgrounded…and we wanted to make it an ‘entirety-of-us’ kind of thing,” said Secretary of ABC L’Eunice Faust ‘17, another member of the team that planned the forum.

The group that history professor Jeremy Zallen joined spoke mainly about police violence in urban communities and he pressed for a historical perspective.

“We were talking about where poor black communities came from in the first place, why there are these tensions and what it’s like for generations of people feeling like the police are an occupying force,” Zallen said. “One doesn’t expect racial healing and those sorts of things to happen in 90 minutes.”

Director of Outreach and Access Services Kylie Bailin found it enlightening to hear others speak about prejudice in their lives.

“Sometimes people spoke from experience, which was really interesting to hear, and really hard to hear,” Bailin said. “[It] was a real eye-opener.”

Some attendees found that while attendance was high, there weren’t enough perspectives being heard.

“In one way [the forum] was very self-reaffirming, which can be dangerous no matter what,” Adam Valavanis ‘17 said. “The self-reaffirming view was an echoing chamber that we were in. At the same time….we did have dissension of how to get where we were going, but where we’re going was always the same thing.”

“This event was especially directed towards the people of the opposing view,” Christian said. “We want to know why you feel like its not important, we want to understand your view so you can understand our view and come to a ‘mid-range.’”

Other attendees, like G. Dean Young, executive director of the Boys and Girls Club of Easton, believed that this did not mean the event wasn’t a success.

“I’m really excited to see that the conversation is going forward,” Young said. “I’m hoping that people do not get discouraged because they feel like they’re talking to the choir and that there are certain segments of the college that are not here. It’s important that the choir gets well tuned right now.”

Courtney felt the event was the beginning of more events and a larger discussion on campus.

“It was successful to an extent in that we didn’t get all the people involved that we really hoped to have the conversation with,” Courtney said, “but at the same time, we were able to get a few of them as well as to give other people the tools [to have an informed discussion].”