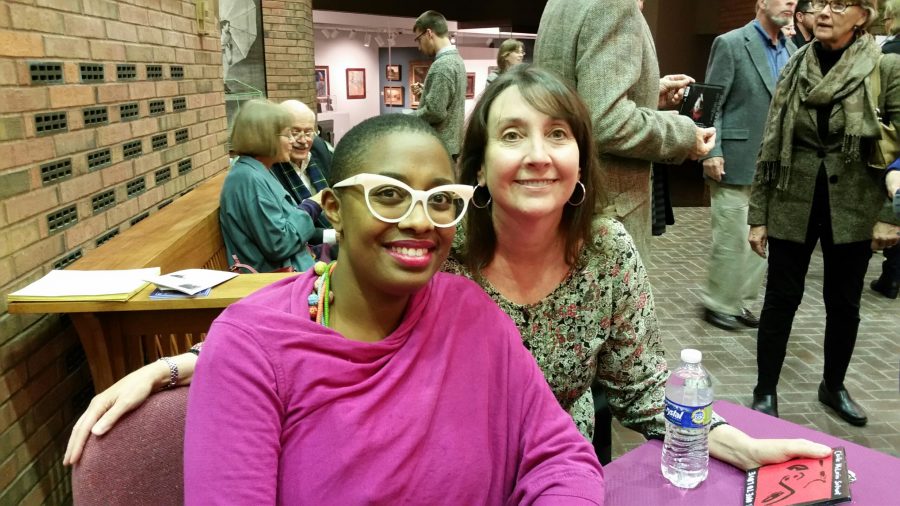 Hollis Ashby (right) has worked with many artists in her career, including jazz singer Cecile McLorin Salvant (left). (Photo courtesy of Hollis Ashby)

After organizing dozens of headline-grabbing performances throughout her lifetime, Hollis Ashby is now being recognized for achievements of her own.

Ashby, the Artistic and Executive Director for the Williams Center of the Arts, recently received the 2020 Presenter of the Year award from North American Performing Arts Agents and Managers (NAPAMA). The award recognizes winners for their artistic judgments, creative program initiatives and successfully-implemented programs for the year and for the entirety of the presenter’s career, according to Ashby.

Ashby has spent her whole career working in the performing arts, on and off college campuses. She held management positions at the American Conservatory Theater and the San Francisco Symphony before transitioning to the University of California, Berkeley’s Cal Presenters, an organization that is recognized as one of the largest presenters on the West Coast and one of the most prevalent on an international scale.

Ashby then left the West Coast for her current position at the Williams Arts Center, where she directs all aspects of multi-disciplinary, multi-cultural performances which range in various genres and cultural backgrounds.

Ashby has successfully presented multiple premiers and debuts and said she could not pick a favorite project in her career.

“It’s almost like picking a favorite child… whatever I’m working on is of interest,” she said.

However, Ashby fondly recalled a residency with German dancer and choreographer Pina Bausch, as well as her work with Gregory Peck, the actor best known for his roles in the movies “Roman Holiday” and “To Kill a Mockingbird.”

For anyone working in the performing arts, the last year has been unexpected, to say the least.

“[COVID-19] has been a devastating circumstance for live performances…it’s caused a halt in the livelihood in all artists, agents and managers, but fortunately, we are seeing a light at the end of the tunnel,” Ashby said.

She explained that at the start of the pandemic, presenters like herself worked furiously to handle cancellations and reschedule events.

“All of us, including myself, thought, ‘What can we do to contribute to this? How are we going to rebuild? How soon?’” she recalled.

Ashby said she felt compelled to get involved in the situation for the sake of artists and presenters alike. She became a panelist for the National Endowment of Arts through the Coronavirus Aid, Relief and Economic Security (CARES) Act. Additionally, she has participated in advocacy work focused on the construction of artist contracts, as she would like to reform the artist contract business model so that artists are not unfairly impacted by events like the pandemic.

Needless to say, Ashby was keeping busy when she received her award notification.

“I was feeling down about the future of our field, and then the phone rang and it totally renewed my commitment. It is hugely gratifying and humbling to be selected,” she said.

Although the pandemic has undoubtedly put a great strain on the industry, Ashby also spoke about the unforeseen benefits, such as creating a greater sense of closeness and providing audience members with insider perspectives into performances.

For instance, in March of 2020 the Williams Arts Center was meant to host Monica Bill Barnes and Company for a big dance performance.

“Because we had commitments to artists, we had to find a way to make those work,” said Ashby. “We found a way to do that online, and the live performance will take place next year. Online, we were able to take the audience into a rehearsal room and make it a more intimate experience.”

“Every week is different and everything evolves differently… we have to be ready to pivot,” she added.

Due to vaccination distribution, Ashby remains optimistic about performances in the fall.