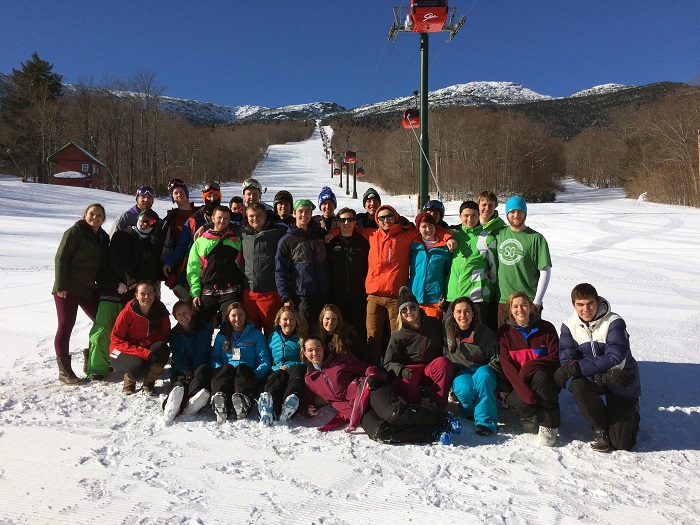 The Lafayette ski team gathers for a group photo at the bottom of a trail.

In recent history, winning has been the status quo for the LafayetteSki team. This season, the team has already clinched a spot in the Regional tournament and is vying for a spot in Nationals.

This wouldn’t be the team’s first trip to the USCSA National Championships. In 2012, the women’s team qualified for the race. Additionally, the entire team qualified for the National race last year.  For some of the seniors that individually qualified in 2013, such as senior captain and President Meg Del Col, this would be their fourth straight trip.

Despite the level of competition, the team accepts skiers and snowboards of any level.

“We have people at lots of different levels,” said Del Col. “There are people like me who have skied their entire life and others who are just starting to race and find that they really love it. It’s fun to get different kinds of people and watch them evolve.”

Like many others on the team, Del Col has been skiing her entire life. Her father, who was also a competitive racer, inspired Del Col to ski. She continued to ski as a member of her high school team in Connecticut, while frequently making trips to Vermont to ski at Killington. The team has gotten better and better in the time she has been at Lafayette.

TheLafayette ski team consists of 60 members, making them one of the bigger teams in their conference.They compete in both the men and women’s divisions. Within each division, there is alpine skiing and freestyle skiing, as well as snowboard freestyle and racing.

Currently, the women’s ski team sits at the top of the Atlantic Highlands Conference. Del Col sits at first in the women’s individual ski rankings within the conference. However, freshman Sydney Burton and sophomore Olivia Erdman who rank third and fifth, respectively, follow her closely. The men’s ski team is tied with Fairfield for first place within the conference. Among the individual ski rankings is Paul Polk in fourth place, Alex Lehmann in fifth, and Will Sargent in sixth place.

The Leopards look to translate their conference dominance into success at the Regional Tournament. If successful, they will qualify for Nationals. Only two teams will move onto the National Championship.The Nationals Championship is within reach of the women’s team, but the men’s team will face tough competition in the Regional tournament.

“Penn State and Navy both have some really good racers,” said senior Connor Kennedy. “They’re pretty serious about it, but that’s not to say there’s no hope. It will be tough. We’ll have to put down some good runs.”

Although the competitive nature of the ski team has increased in recent history, the team members make sure to have fun. During the season, the team practices twice a week at Blue Mountain, which is about a forty-minute drive. In the offseason, the team meets once a week to play soccer, in order to get everyone together and move around.

“I love it,” said Kennedy. “We get along. We go away every weekend and have fun together. There’s a good amount of us who are very competitive. It’s really fun to ski with a group of people that are awesome skiers and good people.”

The Leopards return to the slopes this weekend for their final conference competition. Both the men and women’s teams will then compete in the Regional tournament the weekend of February 20th. Should either team qualify, they will ski at the National Championship during the first weekend in March.