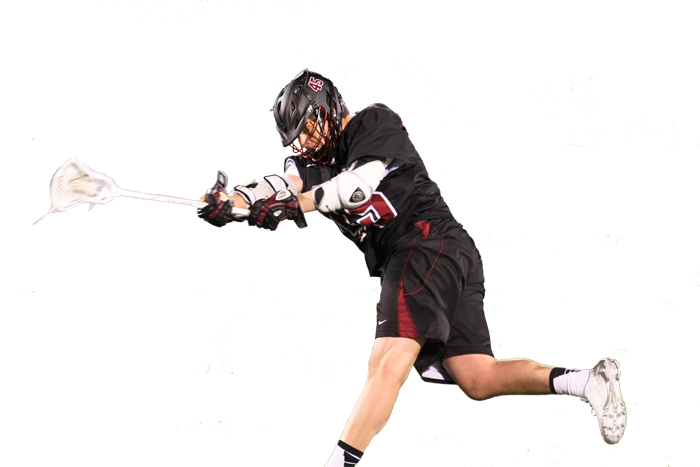 Senior Sonny Round craddles the ball and looks for another open teammate.

The men’s lacrosse team must face their toughest schedule this season since head coach Jim Rogalski’s takeover two years ago. In the past few years, the Patriot League has grown to be one of the most competitive conferences in Division I men’s lacrosse.

The Leopards face both a difficult out-of-conference schedule and Patriot League schedule.

On top of this, the Leopards will have to face 13th ranked Penn in out of league play, as well as UMBC, a team like Navy, that received votes to be nationally ranked this season. Despite the level of competition, the players don’t look past the fact that the rankings are just numbers. The Leopards will begin their home schedule with Penn after opening the season with three road games.

“I played in high school with a lot of those kids [Penn], so I’d like to beat them,” senior captain Matt Confort said.

Another difficulty that the team faces is that the out of league play intermixes with the league play, a change made last season.

“We usually save our Patriot League games until the end of the year,” senior captain Sonny Round said. “But now they’re scattered [throughout the season] and we play Army and Colgate in the beginning of the year. Teams change as the season goes on, so to play a team early is a good thing if you think you’re prepared, and I think we will be.”

Looking into the future, this season will be about vengeance in the Patriot League for some players.

“Some teams we’re looking to get revenge against are Boston and Holy Cross,” Round said. “They’re two teams that we should have beaten [last year], but didn’t play well against.”

The team will have to find four replacements for starting midfielders Matt Evans and Jake Mann, defender Mac Ahsler and goalie Jake Hyatt. For starters, there are 14 new freshmen up for the challenge. The 6’4’’ freshman defenseman George Cloud has already earned himself a starting role.

“The freshmen are such a young class they look to the upperclassmen leadership to help them develop because there’s so much more room for it,” Round said. “By developing those guys that’s how the team gets better.”

There are only four seniors on the team, meaning that the freshmen will have to look to more juniors and sophomores for help. Junior Ben Falcone and sophomore Matt Cortese have set a good example of competition both players are fighting for the position of starting goalie.

“They have a good relationship off of the field,” said Confort. “They’re having a healthy competition and have been working hard and doing really well at practice.”

Last season, the team finished just 2-11 overall. With some experienced veterans and a promising class of newcomers, the team hopes to rebound this season.

“We had a down year last year-we put some higher expectations on ourselves and didn’t live up to them,” Round said. “This year we’re the underdogs in every game, but our coach has been saying embrace the underdog.”

The men open up their season today at 3 p.m. at Wagner.