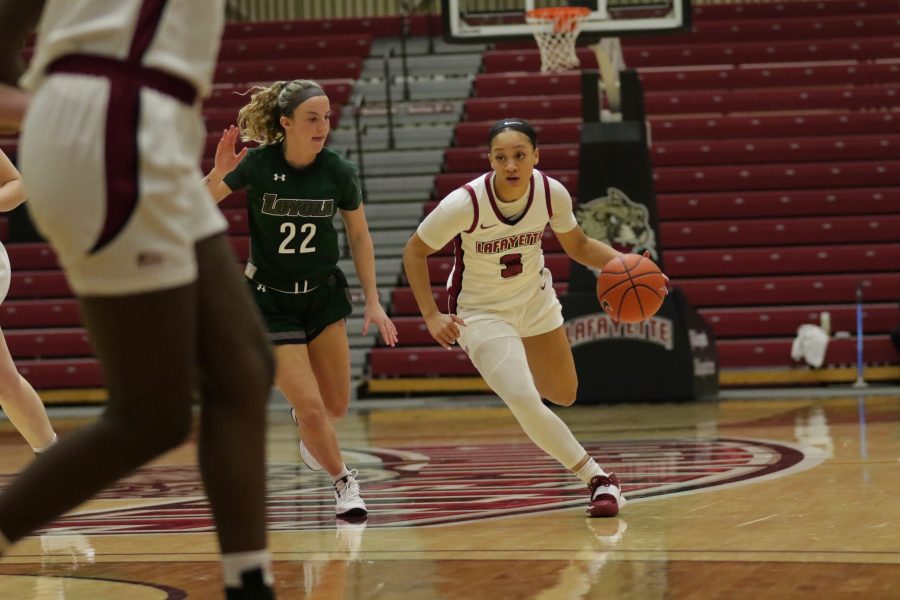 The Lafayette women’s basketball team swept Loyola Maryland this past weekend, heading into the Patriot League playoffs this weekend with some momentum after an up-and-down season.

The Leopards beat the Greyhounds by scores of 47-35 on  Saturday and 70-45 on Sunday, and have now won six straight games against Loyola. After starting the season on a four-game losing streak, the Leopards bounced back with victories in five of their last eight games to finish with a 5-7 record.

The Leopards controlled the boards with a 43-34 advantage, and nearly doubled up the Greyhounds in points in the paint, 20-12.

“From the defensive end, we wanted to force them into tough shots and rebound the ball,” Kucowski said. “We focused on taking away the high post and easy opportunities in the paint. We also wanted to run and get more looks in transition.”

The Leopards held Loyola to 35 points on just 22 percent shooting, the lowest number of points the team has allowed all season.

“We also focused on how we needed to lock them down, which was limiting their three-point opportunities, as they are a good three-point shooting team,” said junior forward Naomi Ganpo.

The Leopards did just that, holding Loyola to 5-18 shooting from behind the arc.

The Leopards started the first quarter red hot, racing out to a 7-0 lead with 6:28 left to play in the first quarter. But Loyola rallied back to keep the score close at the end of the quarter, trailing 14-9.

After a slow start to the second quarter, the Leopards found their groove and extended the lead to 28-14 heading into halftime.

The Leopards slowed down offensively in the second half, but the team’s defense kept them comfortably in the lead for the remainder of the game. Lafayette was outscored by two points over the final two quarters but closed the game out with a 47-35 win.

After a relatively close game on Saturday, the Leopards traveled to Baltimore and posted a resounding 70-45 win over the Greyhounds in the season finale.

“We spent time on fixing the mistakes we committed in the first game,” Ganpo said. “[We] specifically cleaned up our offensive sets against their defense, because we did go on a little scoring drought during the first game against them.”

Sunday’s game called for another career-high for Booth, who topped her efforts from the previous game with 15 points. She has now scored in double-figures in her last three games. Joining Booth in double-figures were Kucowski and Ganpo who had 12 and 10 points, respectively.

“Our point guards attacked the paint and brought pressure on defense, our shooters knocked down open looks, and our post players played tough defense and rebounded well,” Kucowski said.

Kucowski also tallied 13 rebounds, which now puts her just seven rebounds away from becoming the Patriot League All-Time Leading Rebounder. The current leader is Lauren Manis who has 1188 rebounds and graduated from Holy Cross last year.

“I feel like early in the first quarter, the first few blocks I had were able to generate energy for our team offensively and defensively,” Ganpo said. “There’s just something about blocks that gets everyone hyped.”

Loyola started the first half with something to prove, as they would not allow the Leopards to jump out to another early lead. Both teams traded blows throughout the entire first half, which ended with a small Loyola lead, 30-29.

Despite being down one at the half, the Leopards finished the game with one of their best offensive halves of the season to win the game by 25.

“For the first game we kept up a good lead for the entirety of the game, and had a very good defensive effort,” Ganpo said. “In the second game, I feel like our team was able to show a tremendous bounce back after the second half.”

The Leopards beat the Greyhounds in nearly every statistical category on Sunday. Lafayette shot 51 percent from the field, compared to the Greyhounds’ 28 percent, and hit a scorching 50 percent of their shots beyond the arc. Lafayette also led in rebounds, assists, blocks and steals.

The Leopards have earned the seventh seed in the upcoming Patriot League postseason tournament and will travel to second-ranked Boston University on Sunday for a 2 p.m. quarterfinal matchup.