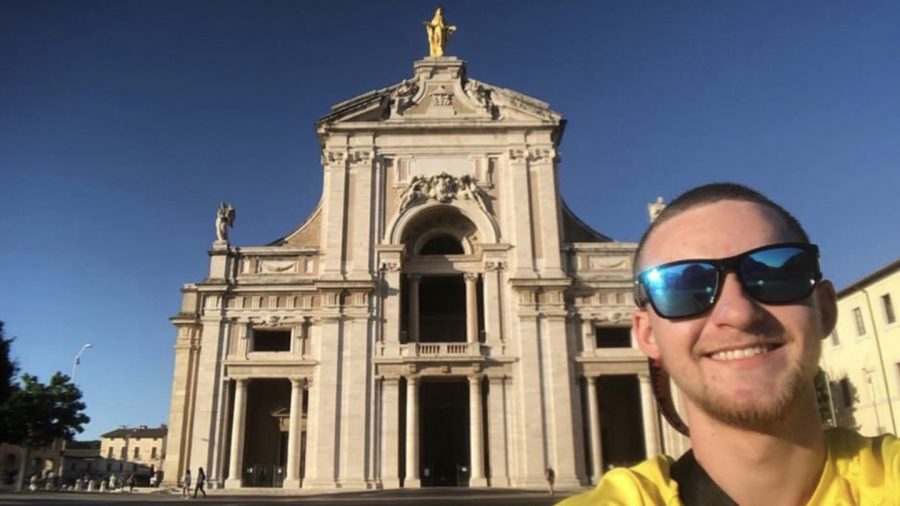 Henry Hinchey ’20, pictured in Italy in 2018, is one of Lafayette's six recipients of the 2020 Fulbright grant. (Photo courtesy of the Lafayette College website)

Last year, the college was honored as a top-producing institution of Fulbright students, with six students receiving a grant and three being named as alternates. While the pandemic has changed the face of international travel, these students have not let it completely deter their plans for travel and education.

The Fulbright U.S. student program offers grants to complete research projects or teach English in various countries around the world. The program aims to foster cultural exchange and promote a deeper understanding between people of different cultures, according to their website.

Henry Hinchey ’20, one recipient of the Fulbright grant last year, was originally scheduled to begin a position as an English Teaching Assistant at a Brazilian university this past February. However, since the program was delayed due to COVID-19 concerns, he is unlikely to make the trip to Brazil.

“Instability has been a hallmark of Latin America, including Brazil for a long time, and COVID-19 has exaggerated that,” Hinchey explained. “Not only from a COVID perspective, but also for my general well-being, it’s not the safest bet.”

However, Hinchey’s journey with the Fulbright program is not over yet; he was able to reapply to the program as if he were a graduating senior. This time, Hinchey applied for a highly selective university grant to get his master’s degree at a Spanish university.

Although he did not receive the Fulbright grant for this opportunity, he was awarded an internal scholarship and plans to start studying at the University of Navarra in the fall.

The University of Navarra is in the Spanish city of Pamplona, which is famous for its Running of the Bulls.

“I had never heard of the University of Navarra before the Fulbright program, but it’s the third best institution in Europe for education majors behind Oxford and Cambridge,” Hinchey said. “I am really fortunate to have come across their program.  It’s led me to a great opportunity and [opened] my eyes to the possibilities in other parts of the world to work in education.”

Hinchey plans to obtain his master’s degree in Spanish Foreign Language Education, which he explained is “applied linguistics with a focus on Spanish language studies.” Applied linguistics, as Hinchey described it, is the study of how language is used, taught and learned.

The versatility of the applied linguistics program allows Hinchey to keep his options open for the future, he said, as he doesn’t want to “limit himself” to just one language.

“I think it’s very likely that I’ll continue my education to the Ph.D. level,” Hinchey said. “I could definitely see myself working in academia.”

Since graduating last spring, Hinchey has primarily been freelancing as a tutor and translator, even translating a manuscript written by a Haitian doctor from French into English.

Already a polyglot with several languages under his belt, has also taken this time to dive deeper into the study of several languages. Specifically, Hinchey has been working on Mandarin, Russian, Arabic, Swahili and, more recently, Dutch. He is also working to familiarize himself with Catalan and Basque, two languages spoken in different regions of Spain.

Additionally, he said he hopes to continue learning the languages of the students he will eventually be teaching in Spain.

“The University of Navarra has a sizable Filipino population, so I’m learning some basic Tagalog, as well as some other European, Asian and African languages,” he explained.

“I’m very fortunate to be in a position where I can freelance part time and spend most of my energy on language studies that will stay with me forever and widen my career opportunities,” Hinchey said on his experience since graduation.

Tedi Beemer ’20, an alternate recipient of last year’s Fulbright grant, applied to the program in order to cultivate her love of travel and gain valuable experience related to her major.

“I’ve always loved to travel. I was a Russian/Eastern European Studies major along with Government and Law,” Beemer said. “I always knew I wanted to go to law school too, but I didn’t want to go right after undergrad. I had a gap year there and I wanted to do something that fit with my interests, so the Fulbright program seemed like a really good fit for me.”

Since graduating from Lafayette in the spring, Beemer has taken her passion for law and helping others to New York City, where she is currently working as a paralegal for an immigration law firm. She also volunteers with Court Appointed Special Advocates (CASA), a program that works to improve the situation of kids in New York’s foster care system.

Despite the uncertainty of the last year, Beemer said she feels that she is just where she is supposed to be.

“I feel like Lafayette’s [Career Center] was really helpful in helping me navigate that difficult period, and I feel like I’m on track despite the numerous speed bumps that were thrown at everyone,” she explained.

As for the future, Beemer still has her sights set on law school for the fall.

“I’ve applied to five schools and I’ve been admitted to three so far,” Beemer said. I want to stay in the city because of my commitment to CASA.”

Selections for next year’s Fulbright Student Program will be released later in the spring.