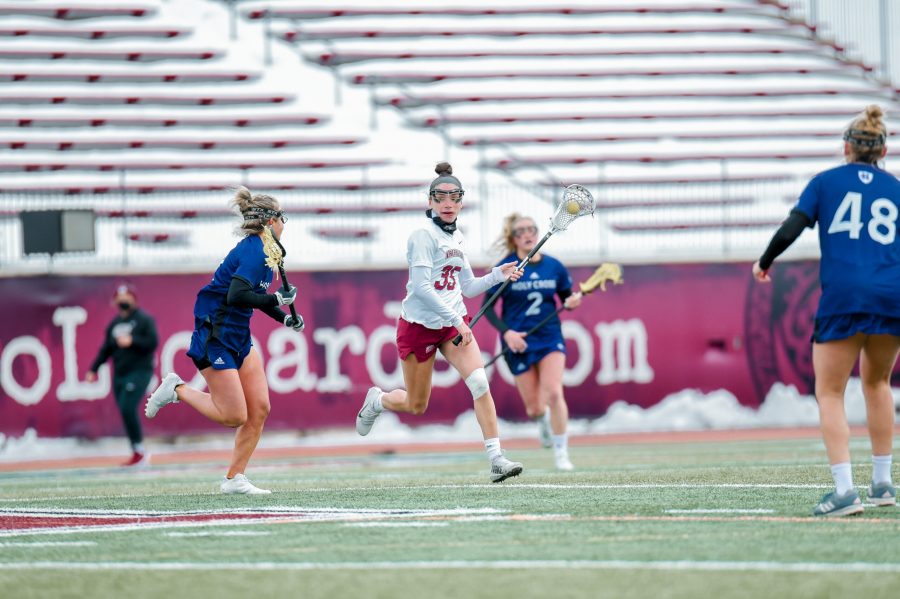 The Lafayette women’s lacrosse team struggled in their season opener last Saturday, losing 12-9 to Holy Cross. The Leopards fell behind quickly in the first half and were stuck playing catch up the rest of the game.

Holy Cross came out firing at Fisher Field and took a 3-0 lead less than five minutes into the match. Sophomore attacker Sarah Bennett scored a minute later to make it 3-1, but the two-goal margin did not last long. Holy Cross had the hot hand for the entirety of the first half and the Leopards failed to keep pace.

The Crusaders extended their lead to 5-1 midway through the first half, before junior attacker Olivia Cunningham notched her first goal of the season to make it a 5-2 game.

Holy Cross piled on three more goals, broken up by a score from Lafayette senior co-captain Anna Stein, and closed out the first half with a 8-3 lead.

“Our team executed very well, especially for our first game, with a lot of new faces on the field,” said head coach Katie McConnell. “Fixing timing on certain things both offensively and defensively is where we need to improve.”

The Leopards found a groove early in the second half and prevented Holy Cross from blowing the game open. Senior attacker Lizzie O’Brien netted her first goal of the season to cut the lead to four, but the Crusaders quickly stretched the lead back to five.

From there the Leopards managed a 3-0 run, spurred by two consecutive goals by Stein and a tally from sophomore midfielder Katie Chiasson. The Leopards trailed by two, 9-7, with 13 minutes remaining, but did not get any closer.

“I was pleased with how we performed on Saturday, particularly later in the game,” Stein said. “Moving forward the main focus is to continue to communicate effectively with each other and play better team offense and team defense.”

Holy Cross responded with two goals of their own to widen their lead to 11-7. Late goals by Stein and Bennett were countered with one score from the Crusaders, who closed out the 12-9 win.

The Leopards were led by Stein, who finished with four goals and one assist and collected a team-high five points. Bennett added two goals and an assist while Cunningham tacked on a goal and two assists.

The score sheet for the Leopards and Crusaders was not markedly different, as the teams were neck and neck for most statistical categories. Holy Cross outshot the Leopards by one, 23-22, with the Crusaders posting 21 shots on goal to Lafayette’s 16. The Maroon and White won three more draws than Holy Cross, 13-10, and also scooped three more ground balls, 19-16. The Crusaders had fewer turnovers with 17 compared to the Leopards’ 19.

The team has just six games remaining in their shortened regular season schedule and will travel to Lewisburg, Pa., tomorrow to take on Bucknell at 1 p.m.