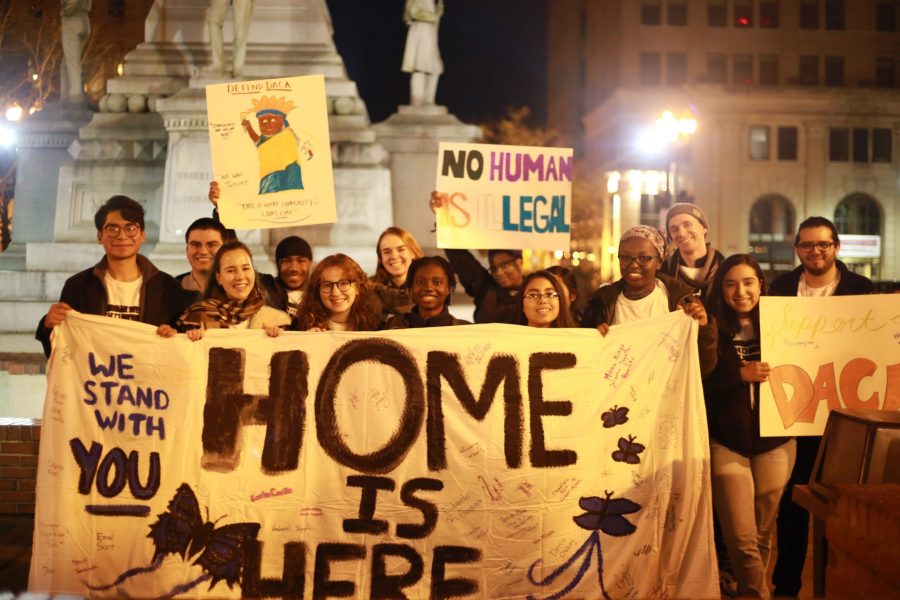 Students gathered downtown in support of DACA in 2019. (Photo courtesy of Milena Berestko '22)

Ever since she moved to the United States from Poland at the age of 15, Milena Berestko ’22 has made an effort to educate herself on topics of social justice issues like racism, homophobia and xenophobia. These efforts have strengthened Berestko’s identity as an activist, she said, on both sides of the Atlantic.

“In the U.S., here we have more diversity, unlike in Poland, where mostly everyone is Catholic and white,” Berestko said. “In Poland, racism doesn’t necessarily exist, and xenophobia isn’t really acknowledged as xenophobia.”

“My experiences in the U.S. gave me a framework to see issues in Poland,” she continued, emphasizing the intersectional approach that U.S. activist theory often takes.

Berestko started her career as an activist by becoming vice president of her high school’s student government and organizing a walkout in protest of the Marjory Stoneman Douglas High School shooting in 2018.

“We sent out flyers, translated into so many different languages, so that everyone could feel included,” Berestko said.

After Donald Trump’s presidential election in 2016, Berestko became more active in talking about immigration issues, especially the Deferred Action for Childhood Arrivals (DACA), a policy which allowed people brought to the United States as children to have deferred action on deportation, and Immigrations and Customs Enforcement (ICE), which was noted for its policy of separating children from their parents at the U.S.-Mexico border under the Trump administration.

Her passion for immigrant rights led her to Albany in 2019 where she rallied for the passing of the Dream Act, which allows DACA recipients to attend city colleges in New York City with state financial aid support.

Reflecting on a DACA workshop she led at the college with Flor Caceres ’22 in Nov. 2019, Berestko said, “That’s when I realized I have something to say that might be important to someone… I found my voice.”

“For me, a huge part of activism is just learning more,” Berestko continued. “I didn’t want to talk about issues I didn’t know anything about, so I immersed myself in the knowledge of other people.”

Another important form of Berestko’s activism is writing. Along with poetry, she writes essays on race, gender and sexuality. She is especially proud of “Protest is Essential Work,” which was a curation of statements she heard from protests and press releases published in the wake of George Floyd’s death.

“The title is pretty important,” Beretsko said. “Governor Cuomo released a press release implementing curfews over the summer and only essential workers were allowed out, hence the title of the poem. Protest is essential. Activism is essential.”

Over the summer, Berestko was an active participant in the Black Lives Matter protests that occurred in the wake of George Floyd’s death. Floyd died after being handcuffed and pinned to the ground by a police officer last May.

“Seeing people holding banners, shouting and making noise was fearful, but there was so much encouraging, motivating energy from people to keep fighting,” Berestko recalled. The protests were a source of inspiration for her activist efforts here at school, particularly concerning the Undocufund and the Dear Lafayette movement that she is involved in.

“I didn’t know what to do over the summer [regarding the killing of George Floyd], but writing and organizing gave me something to do—it was my fire during that time and it still is, to be honest,” she said.

Going forward, Berestko plans to continue this work at the college and throughout United States. She also wants to organize more in Poland, despite the difficulty of doing so from far away. For now, she is focusing on learning and understanding the legal aspects of social issues, specifically looking at abortion rights and its legal turbulence in Poland as well as its connection to the Catholic Church.

For Berestko, activism is a matter of perseverance and questioning.

“Not giving into the oppressor…not giving into the societal norms. We make sure there is something that helps us approach equality—it’s not sitting on the sidelines or being silent. It’s about using your voice because you know it can help other people, whether by voting, protesting, or redistributing resources. Ultimately, it’s a matter of questioning why things happen the way they do, and how we can change that,” Berestko said.

Correction 3/23/21: One quote has been removed from this article.

Correction 3/23/21: Context in square brackets has been added to the quote regarding Berestko not knowing what to do over the summer regarding the killing of George Floyd.

Correction 3/23/21: This article previously stated that Berestko was looking at Poland’s Catholic Church as a potential source of problems and injustices.