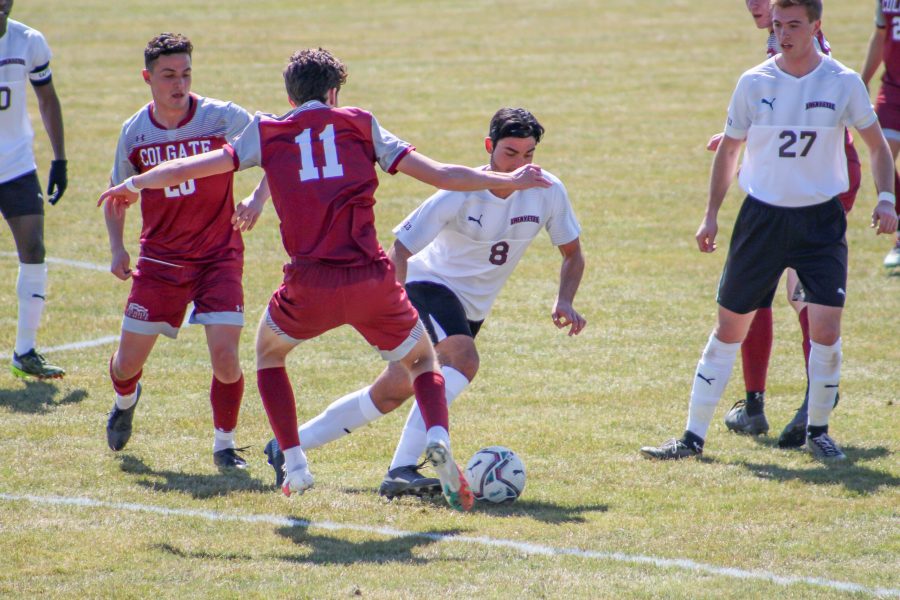 The Lafayette men’s soccer team extended their winning streak to three this past Saturday, beating Colgate on the road by a score of 2-1. The Leopards remain perfect at 3-0 in conference play and 2-0 in the Patriot League North Division.

Despite coming into the game with a winless record (0-2), Colgate finished the 2019 regular season in fifth place, just one spot behind Lafayette.

“Earlier in the week we went over the previous game and discussed what we could do better going into the match against Colgate,” said freshman forward Nolan Lenaghan. “We trained hard with purpose for the remainder of the week and made sure to pay close attention to film from Colgate’s previous games.”

The Leopards jumped out to a quick 1-0 lead with a second minute header by junior midfielder Will Echeverria, who recorded his first career goal in his 37th game. Echeverria celebrated the goal with a backflip before being mobbed by teammates.

“I don’t really remember it happening in the game, I just remember seeing the ball in the air from Sebastian, knew I could get my head to it and did my best to direct it back across goal,” Echeverria said. “I think it’s most guys’ dreams to score a goal in a college game and I am no exception, it felt like a dream come true.”

Echeverria’s play earned him Patriot League Defensive Player of the Week honors, as he was part of the Lafayette defense which held Colgate to just two shots on goal. His early score came off an assist from junior midfielder Sebastian Varela, who earned his first assist of the season.

Echeverria’s early goal allowed Lafayette to take control of the game early, as the Leopard defense held the Raiders to just one shot while the Leopards fired off five shots, with three ending up on target, during the first half. Lafayette carried a 1-0 lead into halftime.

Early in the second half, senior forward Martin Ssessanga curved in a shot from just outside the box and found the lower left corner of the net, giving the Leopards a comfortable two-goal lead in the 51st minute. The goal marked his second of the season and fourth of his career.

After Ssessanga’s early second half goal, Lafayette began to slow down their pace of play. The Raiders went on to generate more offensive opportunities and outshot the Leopards 4-1 in the remaining minutes of the half.

“Towards the end of the game as the fatigue set in, we got a little passive with our pressing and allowed Colgate to sustain pressure on us a little too much and it came back to bite us,” Echeverria said.

Colgate tilted the field in its favor late in the game and eventually found the back of the net in the 86th minute to cut the lead in half. A last-minute shot for the Raiders went high and the Leopards held on for the win.

“As a team we certainly wished we kept the clean sheet and not concede a goal, however getting the win is the most important thing,” said senior defender Andrew Venezia. “Something we did well was bring effort and intensity, making sure our home field is a tough place for any opponent to play”

The Leopards have a chance to secure a spot in the playoffs with a win this Saturday against Boston University.

“Prep for BU will look similar to prep for Colgate,” Venezia said. “Study film to see how BU wants to play, and learn their players’ tendencies. Then form a gameplan of how we want to play and execute it.”

Lafayette’s fourth game of the season is slated for 6 p.m. Saturday in Boston.