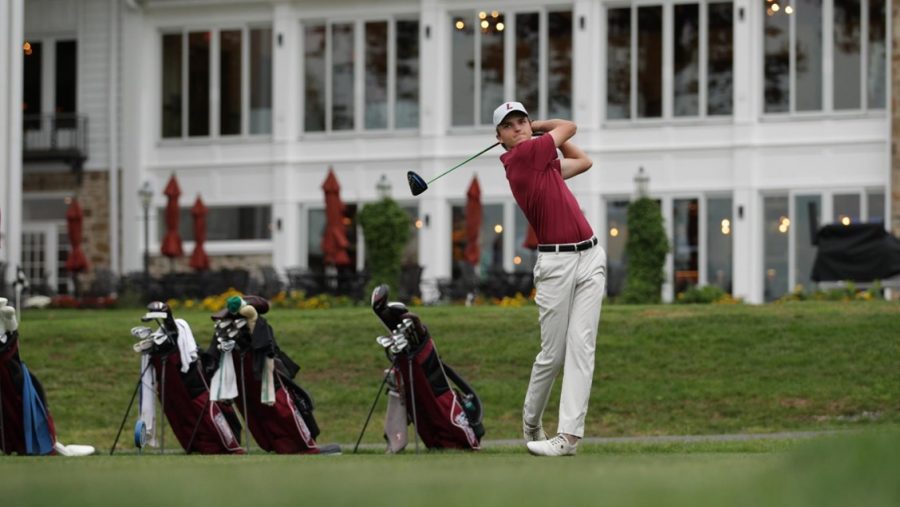 Junior Ryan Tall shot an even-par 72 in the second day of the tournament. (Photo courtesy of Athletic Communications)

The Lafayette golf team hit the links last Saturday for the first time in 502 days, placing seventh out of 10 teams at the Carpetbagger Classic in Urbana, Md. Junior Ryan Tall and senior Cole Berger had the top performances for the Leopards, each finishing tied for 18th place with an eight-over-par 152.

The team had an opportunity to shake off the dust from the long break after last year’s spring season was canceled the day before the team’s first competition.

“It was just so abrupt, one day we’re talking about getting ready for Florida… and 48 hours later, I’m looking at them… and saying adios, see you at some point,” said head coach Jim Hutnik in an interview with GoLeopards.com.

The long hiatus induced by the COVID-19 pandemic was extended due to the severe weather that the Northampton County area has experienced this winter. As a result, preparation for the season was postponed until about two weeks before the first tournament.

“I think being able to get back on campus and back to practice has been something that we have all been looking forward to,” Tall said. “It was great to get back and be with the team; you miss it more than you realize. Our coach actually kept a running day count of how many days we had been out of competition, and when we teed it up on Saturday, it had been, I think, more than 500 days.”

It was a tale of two days for the Leopards, who showed signs of rust from the long offseason on the first day of the weekend tournament and struggled to stay competitive. Junior Kazuki Osawa was the only Leopard to finish within five shots of the lead on day one.

After the first day of competition, the Leopards sat in 1oth place out of 10 teams and no players managed to shoot below +5 other than Osawa, leading to a team score of +35 for day one. The Maroon and White were able to find their stroke on day two though, with each player shooting lower than they had the day before.

After shooting a +8 on Saturday, Tall shot even on Sunday and entered a tie with Berger for 18th place, seven shots off the lead. Both Berger and senior Brendan Cronin shot one-over-par for the second and final round.

Osawa managed to shoot four-over-par on Sunday, and the Leopards as a team trimmed the total number of shots from day one to day two by 21 strokes, the most significant improvement of any team in the competition by a wide margin. Tall, one of only five players to shoot at or below par in the final round, had the second-largest day-to-day improvement out of anyone in the entire tournament.

“We tried to come out with a hot start, but as some would say – the golfing gods were not in our favor, so Sunday we just tried to regroup and adjust,” Tall said. “The +8 round was just rust; my game feels like it can improve, but in terms of the performance on Sunday, I couldn’t put anything together to make it a special round, but it was just great to be out there, experiencing competition again.”

After finishing last on Saturday, the team turned in a combined card of 294 on Sunday, tied for the best round of the entire tournament and giving them a total score of 609. That Sunday round moved them up to a seventh place and within four strokes of third.

Fairleigh Dickinson University finished first at the Carpetbagger Classic with a score of 596, trailed by Bucknell (601) and Robert Morris University (605) to round out the top three.

The Leopards will compete this weekend in The Battle for Rum Pointe in Rum Pointe, Md.