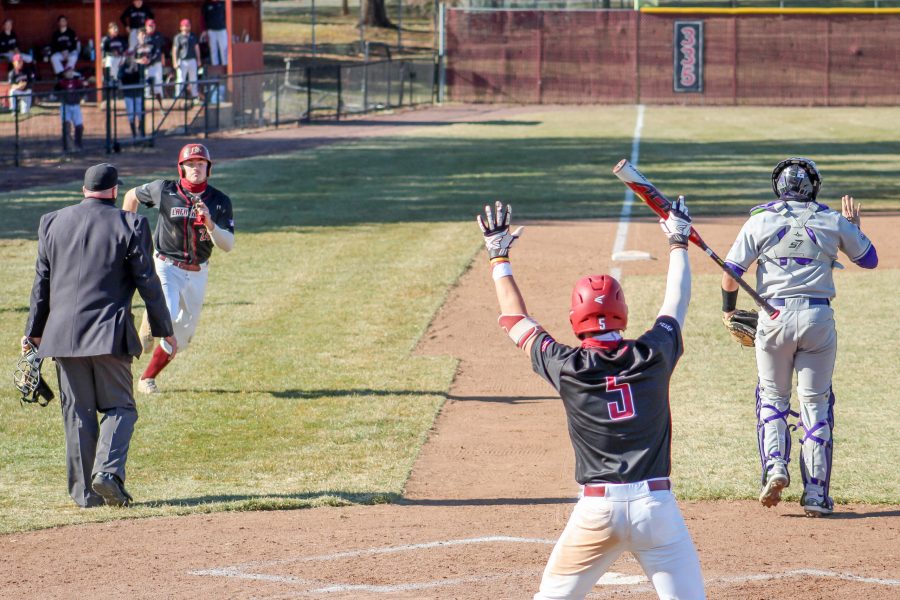 Sophomore outfielder Pete Ciuffreda (left) had a hit in each of the games against Holy Cross. (Photo by Cole Jacobson '24)

The Lafayette baseball team received contributions from all over the roster in a three-game sweep of Holy Cross last weekend. The Leopards squared off with the Crusaders once on Saturday and twice on Sunday, winning all three games in their first Patriot League action this spring.

The Crusaders struck first in the top of the second inning with a passed ball and error making the score 1-0. The game was then scoreless for two innings before the Leopards’ bats came alive in the bottom of the fourth.

Sophomore outfielder Pete Ciuffreda got on base with a hit by pitch before junior catcher Dylan Minghini drew a walk, leaving the Leopards with runners on first and second with one out. Senior outfielder Colin Hartey was next up and reached base on a fielding error, bringing Ciuffreda home and tying the game at 1-1.

In the sixth, Ciuffreda led the inning off with a double and Minghini followed with a single, scoring Ciuffreda and giving the Leopards a 2-1 lead.

The Leopards tacked on one more run in the seventh with a home run from sophomore infielder Kyle Chmielewski, giving the Leopards a 3-1 advantage. That was all the Leopards needed, as flawless pitching closed out the game and Lafayette went on to win 3-1.

The first game on Sunday was more of the same, as the Leopard pitching staff threw a combined no-hitter behind sophomores Jake Bloss and Nolan Morr. Bloss went 5.2 innings and struck out six to earn the win, and was subsequently named the Patriot League Pitcher of the Week for his efforts. Morr came in for the final 1.2 innings to earn the save, striking out two.

The Leopards broke through in a major way in the bottom of the third inning when senior infielder Ethan Stern was hit by a pitch and then put himself in scoring position by stealing second base. Ciuffreda continued his hot start to the season when he doubled on the next pitch, scoring Stern to give the Leopards a 1-0 lead.  Next up was Minghini, who mashed a two-run homer to give the Leopards a 3-0 lead.

The Leopards added one more in the fifth to make the score 4-0 before Morr closed out the win.

In the second game of the Sunday doubleheader, the script completely flipped for both teams in a high-scoring affair. The Leopards were led by freshmen outfielder Justin Grech who recorded two hits, two runs and four RBIs. Following Grech, Chmielewski and sophomore designated hitter Patrick Vandenbergh each chipped in with two hits. Junior Kyle Subers toed the rubber and went five innings, striking out five Crusaders to earn the victory for the Leopards.

In the first inning, Stern kicked off the scoring with a single that brought in Grech, who walked. In the second inning, Grech contributed a single of his own, bringing in two runs which made the score 3-0 in favor of the Leopards. A bases-loaded walk by Ciuffreda in the latter half of the inning put the Leopards up 4-0.

The Leopards added two runs in the third and four runs in the fourth to go up 10-0. Holy Cross answered in the sixth with a run of their own to make the score 10-1, and then scored four in the seventh and two in the eighth to pull within three of the Leopards, 10-7.

In the bottom of the eighth, the Leopards added one more of their own to make the score 11-7.

In the ninth, the Crusaders added two more runs to pull within two, making the score 11-9. However, it ultimately wasn’t enough as Morr came in to earn the save and give the Leopards an 11-9 victory and the series sweep over the Crusaders.

“I feel great about my performance in the third game, but most importantly I feel like as a team we really grinded through all nine innings to accomplish the main goal of winning,” Grech said. “Our main focus is getting every guy to cross home plate when they are in scoring position.”

Lafayette lost 20-5 on Tuesday in a non-conference matchup with Kansas before Wednesday’s rematch was canceled due to inclement weather.

The Leopards resume Patriot League play when they host Lehigh tomorrow in a doubleheader at 12 and 3 p.m.