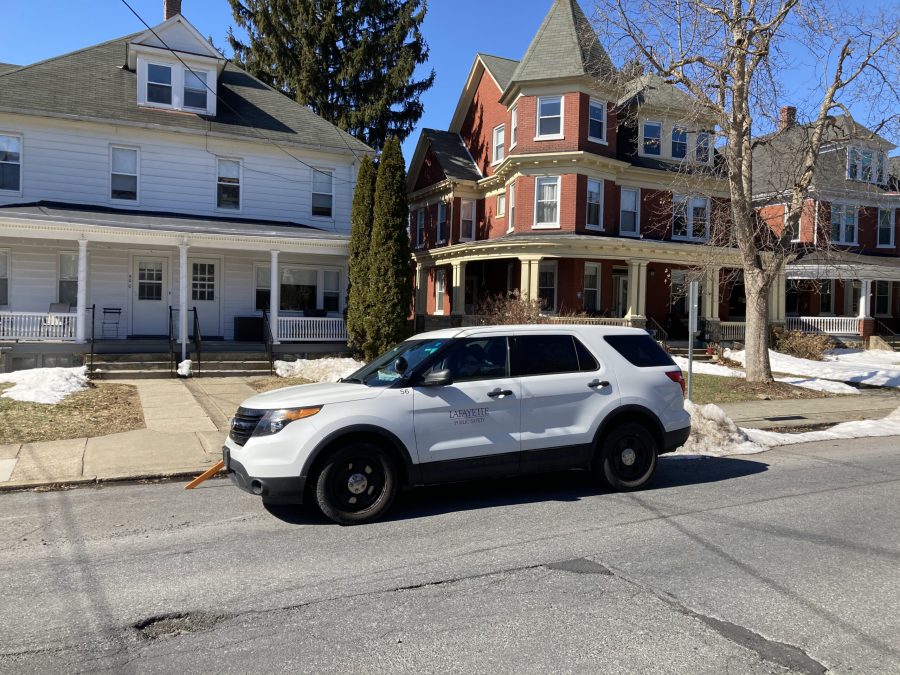 As of Wednesday security was still stationed on the 400 block of McCartney after the most recent incident on March 5. (Photo by Andrew Hollander '21)

Northampton County District Attorney Terry Houck said that the college did not contact his office during their investigation of the Feb. 22 break-in on McCartney Street. The Easton Police Department is now leading the investigation of the break–in after a suspect in a similar March 5 robbery on the same block was apprehended.

“Easton police contacted me immediately [on the March 5 incident] with respect to issues of search warrants, legal issues, and things of that nature,” Houck said. “They pretty much called me every day until there was an arrest made. Lafayette did not call me [during the investigation of the Feb. 22 incident], and from that, you can…make your own conclusions.”

“I’m not going to criticize a law enforcement agency for not contacting us,” Houck added. “They have no obligation to contact us, and the only time they have to call us is when it’s getting time to charge, and we at the district attorney’s office will either approve or disapprove the charges based on the probable cause.”

Apart from initial help from Easton Police Department, Public Safety led the investigation of the Feb. 22 break-in because it occurred on college property.  In this incident, a phone was stolen and a victim suffered minor scratches.

Easton police took over after apprehending a Bethlehem man who later confessed to the March 5 break-in, according to court papers.

After the March 5 incident, the campus was not locked down until 40 minutes after the break-in was reported at 6:50 a.m. to Public Safety by Northampton County 911. The first alert was sent out to the campus community at 7:25 a.m. and the campus was then locked down from 7:30 a.m. to 8:49 a.m.

Troxell reiterated that the crime occurred within public safety jurisdiction and that the department remains in contact with Easton Police. He refrained from commenting on allegations of miscommunication.

“I can’t get into the comments that may have been in that [Lehigh Valley Live] article. I don’t want to comment on an active investigation,” Troxell said.

Despite arriving at the scene of the Feb. 22 crime at 3:52 a.m., virtually all Easton police personnel had cleared the scene at College Hill by 5:55 a.m., when it was determined that Lafayette Public Safety would lead the investigation. The Easton Police did not officially take over the investigation into the March 5 crime until the Bethlehem man was arrested on March 13, according to Lehigh Valley Live.

Houck could not comment on whether his work was slowed down by the lack of communication from the college because the investigation is still ongoing.

“I would have liked for them [Lafayette Public Safety] to reach out if they had questions that they needed answers by our office,” he said. “But it’s up to each Police Department as to whether or not they call the district attorney’s office. Each police department handled their calls and investigated their cases as they see fit,” he reiterated.

Houck noted that he “talks with Easton PD quite regularly about the investigation.”

“There’s protocols that we follow–both sides–and we work with the district attorney’s office on other cases as well, so I don’t want to comment on this particular case as it’s still active,” Troxell said.