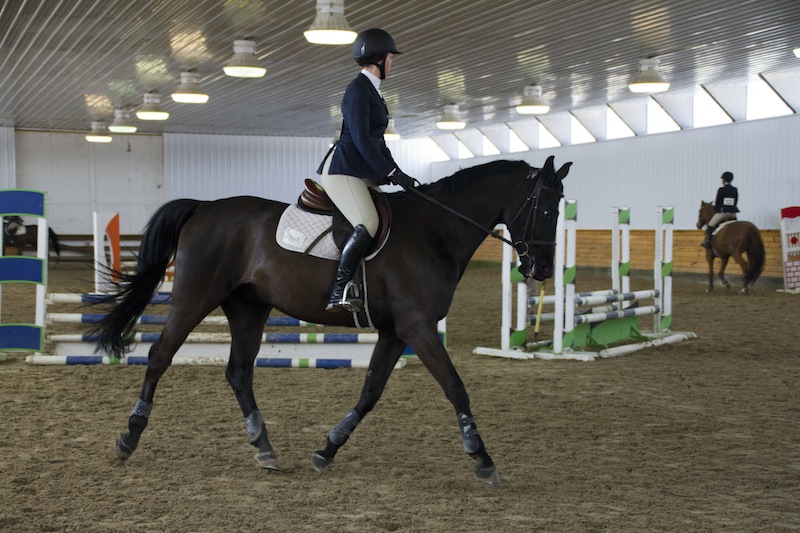 Rebekah Scharfe rides in their most recent show. [Photo by Hana Isihara ‘17]

Equestrian team’s success is flying under the radar
Although they are not the most visible of sports team on campus, the Lafayette equestrian team is one of school’s most successful club teams.

In the past four years, the team has come in second in the region twice, in addition to winning the 2013-2014 show season.

This year’s team, led by co-captains senior Rebekah Scharfe and junior Sarah Pavlini, will ride in a final, must-win, competition this weekend. The team currently leads the conference in points, which would give them a spot to compete in the Zone championships. Should they still hold the lead after this Sunday’s competition, the team will advance.

Members of the team have one lesson per week at a barn about 30 minutes from school. Competitions generally fall on the weekend. Throughout the regular season, the team has 10 shows. They also have meetings throughout the week where they plan logistics and fundraising, and prepare for competitions.

In the Intercollegiate Horse Show Association, schools compete both as a team and as individuals. Pavlini explains that this team element is unique to collegiate riding. In addition, members ride horses provided by the site of competition, rather than their own horse.

“Once you come to college, it’s completely different, because you ride random horses and that takes away that partnership,” Pavlini said. “Now, you have a team, rather than being an individual, so it really changes that dynamic of the competition.”

A single rider for each division at a show is selected by the team to be the rider whose score will count. At the end of the competition, each selected rider’s score is added together, and those points are awarded to the team. The team with the most cumulative points at the end of the regular season moves on to the Zone championship. The top two teams at that championship continue on to the National Championship.

This year, the team has been especially competitive. They hold the lead for first in the region by about 20 points. They are also one of just three equestrian teams in the country to have sent a rider to every Tournament of Champions competition. This event occurs multiple times each year and qualifying teams send their best rider to compete.

“I competed at the National Championship before, but I was never really a contender at those,” Scharfe said. “To be able to compete at the national level with good riders and find success was really cool for me.”

Scharfe began riding at eight years old. By the age of nine, she was riding every day. She competed locally at her barn before riding at the high school. She then chose Lafayette because it enabled her to pursue a degree in mechanical engineering, while continuing to be a part of a riding team.

“The fact that Lafayette had a riding team was a draw for me, and it ended up being even more successful that I had hoped it would be,” Scharfe said.

Scharfe shares her captaincy with Pavlini. Similarly to Scharfe, she has been a horseback rider her entire life. The U.S. Equestrian Team Headquarters is just five minutes from her house in New Jersey. According to her, she needed to choose a college with a riding team, or a school close enough to home for her to be able to return and ride at her own barn.

In order to win the Regional Championship, Lafayette must have more points than their rival Rutgers. They succeeded in this task last year. Not only is Rutgers a larger school, but also their membership is twice the size of Lafayette’s. Despite the equestrian team not given much visibility on campus, the team continues to do well in its shows.