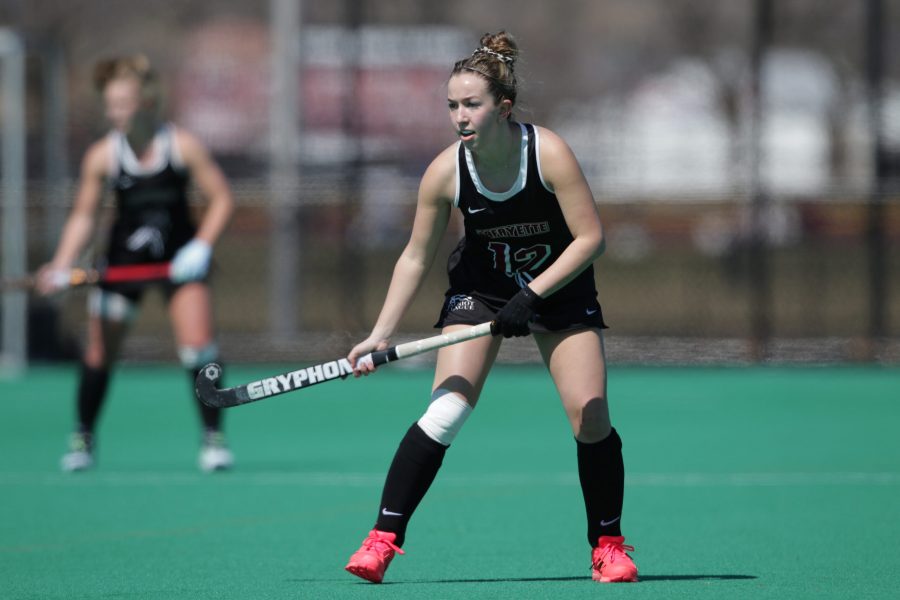 The Lafayette field hockey team is yet to get over the hump as the team dropped a 2-1 nail-biter in overtime to Boston University (BU) last weekend. The team remains winless at 0-2 after losing to Lehigh in the season opener.

The shortened season means that each game is more precious compared to a regular year, making the narrow loss against BU this past weekend a difficult pill to swallow after a neck and neck match.

“COVID has flipped everything upside down and inside out,” said junior forward Alix Talkow. “We traditionally play in the fall, so it was very strange coming back this spring to competition rather than training. It had been 490 days since we last played a game prior to our home opener. We are very grateful to have a modified competition season this spring.”

The match remained close throughout, as neither teams scored in the first half. The Terriers broke the stalemate in the third quarter with a goal on a scramble in front of the cage, opening up a 1-0 lead. The Leopards found the equalizer just three minutes later with a score of their own from sophomore forward Tara Hamilton, tying the game at one.

“We had a little bit of trouble getting clear outcomes in the circle,” Talkow said. “We were down 0-1 and Tara’s goal in the third quarter was huge to break even. This was a turning point in the game and definitely shifted the momentum.”

The teams remained knotted at one heading into the fourth quarter, and neither team was able to break the tie before the end of regulation.

The Terriers found the game-winner just two minutes and 15 seconds into the extra session, when BU forward Alexis Pettisani finished from the right wing in dramatic fashion.

“Overtime was a bit of a blur,” Talkow said. “BU’s fast pace and physicality definitely got the most of us in OT. We played a good game, but had trouble capitalizing on our opportunities.”

The Leopards were outshot 6-3 in the game but recorded one more shot on net than the Terriers. Each team committed 24 fouls and Boston University held a 3-1 advantage in penalty corners.

Despite the loss, Talkow is confident in the team’s ability to make it to the postseason tournament with the help of a deep sophomore class.

“The sophomore class is very dominant and each player has contributed a lot this season,” Talkow said. “As a fairly small team, we are extremely close-knit and have strong connections both on and off the field.”

The Leopards are competing with six other teams for just four postseason spots, and currently sit just outside the playoff picture in fifth place.

“Patriot League field hockey is experiencing March Madness in and of itself,” Talkow said. “Teams that traditionally haven’t done really well are [doing well] and vice versa. It is a complete toss up for the conference but I strongly believe we will be able to make the tournament and compete for the championship.”

The Leopards will be searching for their first win on Sunday with a trip to Holy Cross. The game is slated for an 11 a.m. start.