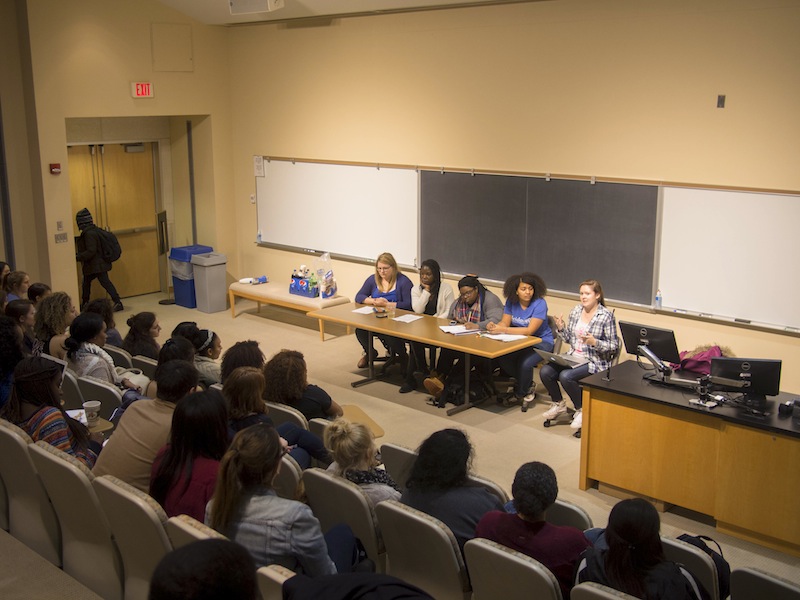 Attendees participate in the discussion facilitated by 4 members of Kaleidoscope and President of the National Panhellenic Conference, Amanda Schwartz ‘16. [Photo by Willem Ytsma ‘16]

Students consider introducing historically black sorority to campus
Members of the Lafayette community convened Tuesday night to consider the possible addition of a Divine Nine sorority. Kaleidoscope, NIA and Lafayette’s PanHellenic Council representatives led the discussion to gauge the interest and need for introducing one of the historically black sorority on Lafayette’s Campus.

Valerie Melson ‘17, facilitator of the discussion, chose to incite this dialogue to introduce the potential for creating a home for women of color who have not yet found a place in current sororities on campus.

“For some reason they don’t feel welcomed,” Melson said. “It’s sad but you feel more welcomed when people look like you. It’s not that the organizations are segregating or racist by nature. It’s that historically there has been this perception, and they need to tackle that and address that in whatever way it’s going to be successful.”

Many attendees agreed that Lafayette is changing over time as a community, but the sororities are not reflecting the growing diversity of the student population.

“I don’t feel like there should be any reason why the school is becoming more diverse and we don’t have a Divine Nine here,” said Jesinta Blaylock ‘17, a member of AGD sorority. “If we’re going to have Greek life, it should cater to everyone.”

Some students expressed that the recruitment process has further exasperated the lack of spots in current sororities.

“It creates a sense of unfairness and injustice in my mind,” said Mariah Fernandez ‘17 as she reflected on her experience of fall recruitment. “We have to go through this strict formal process…not having the advantage of knowing the girls previously, then you’re really starting from scratch, that’s another unfair advantage.”
Advisor to Fraternities & Sororities Daniel Ayala hopes to constantly improve the recruitment process. He realizes the flaws and plans to work with the sororities to identify ways to attract more students of color.
Participants also said that financial considerations were a crucial factor for many students in deciding to join Greek life.

Jenny Ghosh ‘17, who went through fall recruitment said that she couldn’t stick with a sorority and make it her home because of financial issues. Similarly, Blaylock expressed gratitude towards her sisters who provided her with resources to pay her dues when her parents disapproved of her decision to join AGD.

The consensus from the discussion was that there is definite interest to create some form of multicultural sorority or black sorority. However, some students questioned if that would further create division between the students and pressure white and minorities to stick to “their” group.

“I know a lot of people would imagine at the outset that this would mean some kind of separatist social experience,” Dean of Intercultural Development John McKnight said. “I think that’s probably what happens anyways at Lafayette, so this would provide an opportunity to level the playing field.”

The introduction of a historically black sorority to campus may not be a quick transition, since there are many logistical matters that must be addressed. It can long process, but Lafayette is starting the conversation now and exploring the possibilities.