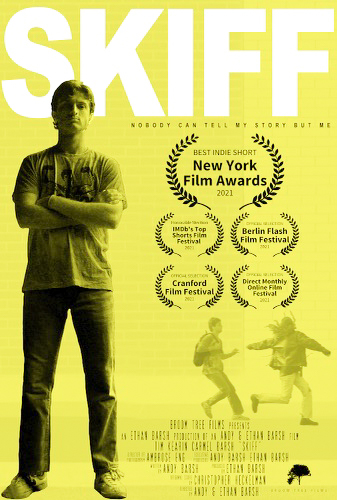 “Skiff” is the story of a “categorically forgettable” high school student who attempts to leave his mark on a small town in Pennsylvania. Written, directed and produced during the COVID-19 pandemic by Ethan Barsh ’21 along with his father Andy, the film was the recipient of the Best Indie Film Awards at the New York Film Awards, among other accolades.

Based on Andy’s original short story, “Skiff” was shot in just four days in downtown Easton, though the town from the screenplay is called Northampton.

Beginning in April, Ethan, along with his father, began to adapt the original story to a screenplay by modernizing some of the references, making some of the written gags visual and changing the setting from an ambiguous southern town to the more familiar Northampton.

Although Ethan had never taken a film class or intended to pursue filmmaking professionally before last year, he said he has always had an appreciation for film, citing “Shark Tales,” “The Godfather” and Martin Scorsese as inspirations. He explained that his dad’s commitment to the project, his knowledge of media due to his career in television and his industry connections were central to the production. Andy is a senior director at CNBS with a background in television directing as well.

“I couldn’t have done it without him,” Ethan said.

In a matter of months, Ethan arranged filming permits with the mayor of Easton, implemented technicalities specific to screenplays, arranged for the composition of the score and assembled a full cast of characters.

First, he cast his close friend Tim Kearin ’21 as the titular character, Skiff, in his screen debut. Ethan and Kearin stayed together on campus for the duration of the shoot, discussing character choices, motivations and plans for each scene. They shot the film over four days in July in the heart of Easton. Kearin called the process a “once in a lifetime experience.”

Kearin described the largest challenge of the project as “unpacking who Skiff was and this idea of what it would be like to be this faceless vessel.” To achieve this goal, he journaled and went beyond the source material and script to determine why Skiff behaves the way he does.

Although this was Kearin’s first film, he is a veteran of the stage. For most of his years in high school, he acted in various productions at the rigorous KIDZ Theater in New York City. In addition, he starred in Marquis Players’ productions of “West Side Story” and “South Pacific”, as well as two of their fall showcases. Currently, he is serving as the set designer for Marquis Players’ upcoming production of “The Wedding Singer.”

For Kearin, this film was a vastly different experience from his previous roles. In musicals, he said, “it’s all about doing everything big and grand.” In contrast, film acting was more based on nuances, which allowed him to implement method acting to bring his character to life, he said. He explored the process of feeling the loneliness of being forgettable and masking it in a cheeky way to assemble a layered portrayal.

After casting Kearin, Barsh included many of his family members in the production of “Skiff.” He decided to cast his sister Carmel in the leading role of Lilypad for her acting debut. His brother Jack also acted in the film, playing a student in the classroom scene.

To cast the rest of the speaking roles, as well as the extras, Ethan posted an open call on Backstage.com and sorted through over 100 submissions. He also worked closely with his childhood friend, composer Christopher Heckelman, to add musical cues to echo the film’s key moments.

“It’s hard to establish a good working dynamic, especially in [a short] amount of time, and I’ve known my dad for 22 years,” he said. “So, that dynamic is already established and we talk about movies all the time, so we already have that, like our own movie language.”

Ethan is currently working on two upcoming projects. The first is a food-centric piece that explores the relationship between a grandfather and grandson over Passover, entitled “L’dor V’dor” (“From Generation to Generation” in Hebrew). The other is a documentary about a drug dealer in 1980s New York.

“Skiff” can be found and watched on Barsh’s website, broomtreefilms.com.

Correction 4/9/21: This article originally stated that the town from the short story was called Northampton.