The slope of success 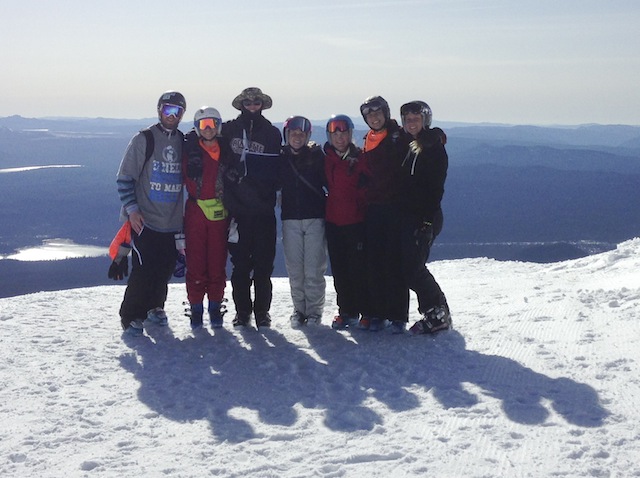 The ski teams gathers at the base of Mt. Bachelor’s before the competition began. [Photo courtesy of Sydney Burton ‘16]

Despite finish, ski team makes the most of Oregon
Going to the USCSA National Championship is nothing new for the Lafayette Ski Team. This year marked their second consecutive year at the championship—this time at Mt. Bachelor in Oregon earlier this month.

The ski team saw great success in the regular season, with the women sweeping the alpine podium and the men narrowly defeating Lehigh for first place in the collective point totals. The freestyle team also achieved notable success with senior Connor Kennedy taking first place for the men and senior Jessica Horvath winning the conference gold for the women.

Even with their local success, the team admits that the level of competition on the national level is a totally different beast.

“Nationals is a much higher competition level than our conference or region that we compete in regularly,” sophomore Olivia Erdman said. “You are competing with incredible athletes from all around the country, some that are used to training everyday on huge mountains like as Lake Tahoe.”

Senior Connor Kennedy, who has been skiing for 16 years, competes in freestyle skiing. He did an event called slope style, which made its Olympic debut at the 2014 Sochi games. Slope style skiing includes a downhill course filled with jumps and rails upon which the skier showcase their diverse caches of flips and spins that are often complimented by different variations of grabs.

Fueled by the adrenaline of national competition, Kennedy pushed himself to try new tricks this year, even attempting his first ever Double Cork 900 (two flips paired with two and a half spins). Despite narrowly missing the cut for finals, Kennedy was grateful for the opportunity to compete at such a high level.

“I really enjoy the competitiveness out there, because it really makes me step up my game as well,” Kennedy said.

Across the hill on the racecourse, the Lafayette skiers embraced the warmer temperatures and better conditions than they are used to at East Coast competitions.

“Skiing on the West Coast, I believe, is a much different experience,” Erdman said. “For one it seemed much warmer, there was less bone-chilling winds or temperatures, and there is not usually boiler plate ice spots.”

While the team didn’t bring home any hardware, the general consensus among the skiers is that they had a great time. After dominating the regional circuit throughout the winter, the team can only be proud of their accomplishments. Plus, they got to go out for spring skiing.