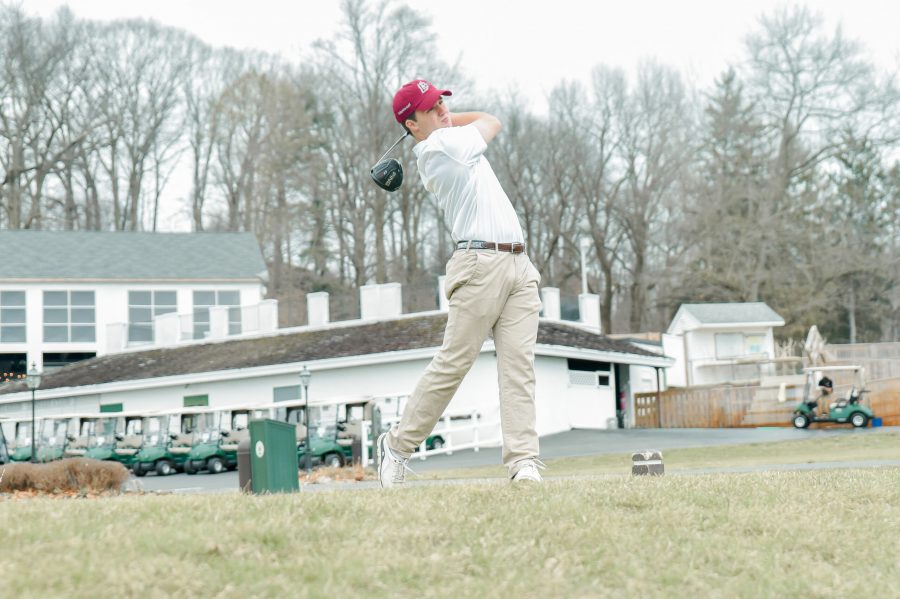 The team has two more invitationals before a head-to-head matchup with rival Lehigh. (Photo courtesy of Athletic Communications)

After a slow start to the season, the Lafayette golf team has hit their stride with back-to-back top five finishes. The Leopards placed third two weeks ago at the Battle at Rum Pointe and placed fourth this past weekend at the Rolling Green Intercollegiate Invitational. The course was a par 70.

Lafayette finished one spot shy of the podium at Rolling Green, tying for fourth out of 13 teams and finishing just eight shots off the lead with a combined score of 293 (+13). Rhode Island, the winner of the invitational, shot a five-over-par 285.

The Leopards battled to a three-way tie with Villanova and St. Joseph’s for fourth, and placed ahead of conference foes Georgetown, Lehigh and Colgate. The team finished six strokes behind Bucknell, the only other Patriot League program at the event.

In a typical season, golfers from different teams are matched up and play together during the competitions. This spring, however, is a little different.

“We are not competing in the same way they usually would at this point in a typical season,” said junior Ryan Tall, the Lafayette representative for the PING Division I All-Northeast Region team. “We would normally play against our direct player seed from other teams, but this year, given COVID, we play together with the rest of the players from [our] team.”

Lafayette was led by a productive round from junior Kazuki Osawa, who finished tied for sixth with a one-over-par. Osawa has played well over his last three tournament appearances, averaging 72 shots per round and being the only member of the Lafayette team to place in the top-10 in consecutive tournaments. Osawa earned an identical sixth place finish at Rum Pointe two weeks ago.

“Kaz is making a real case for the best player in the league,” Tall said. “All the props to him, and he’s been practicing really hard. The way he’s playing is really pushing the rest of us to match his energy and playing level.”

The success was not enjoyed solely by Osawa, as both Tall and senior Cole Berger finished close behind with identical scores of two-over-par, placing them in a tie for 12th. Their play made Lafayette one of only four schools with three or more players in the top twelve. Rounding out the Lafayette scorecard was sophomore Martin Vanhaelst with an eight-over-par 78, while junior Drew Steiner and sophomore Augie Beers had matching scores of 79.

Lafayette has two more invitationals and the annual Presidents’ Cup matchup with rival Lehigh as their final tune-ups before the Patriot League Championships occur in the first weekend of May.

“These tournaments are incredibly important, but they are also all practice for the main goal which is the Patriot League Championship,” Tall said. “That is the goal, and that has always been the goal. That is our season, and that is what matters. As long as we compete in that moment with the trophy on the line, hopefully we’ll be full steam ahead.”

Lafayette will hit the links on Monday and Tuesday for the Wildcat Invitational in Villanova, Pa.