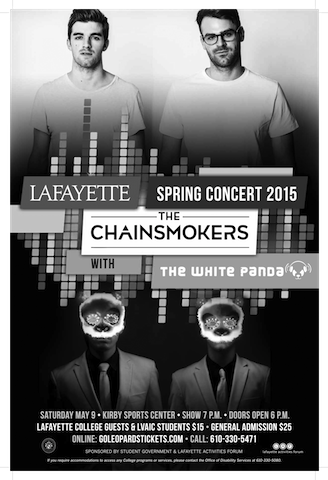 The Chainsmokers, popular for their 2014 hit, “#Selfie” will be the headliner for this year’s Lafayette’s Activities Forum (LAF) Spring Concert with opener, White Panda.

The Chainsmokers, a New York City based songwriter duo comprised of Andrew Taggart and Alex Pall, is known for their EDM sound generated from indie, progressive and pop music. With hits like “Kanye” and live shows that exhibit wild antics. Along with the duo’s hilarious and quirky personalities, the DJs were the forerunners of this year’s Spring Concert Survey by LAF produced earlier in the year.

The selection process for the headliner of the Spring Concert involves, the survey, price range, and band availability.

“They put on a really good show. There’s a lot of really cool production they’re hoping to do and we’re helping to set up…” Connor Heinlien ‘15 said.

And as far as White Panda is concerned, the band is comprised of two boyhood friends who mashed up their independent college musical styles. The opener will compliment the headliner. “They’re both DJ sorts that I think will play well of one another,” Heinlien said.

The Spring Concert will be May 9 at Kirby Sports Center at 7 p.m. Doors will open at 6 p.m.