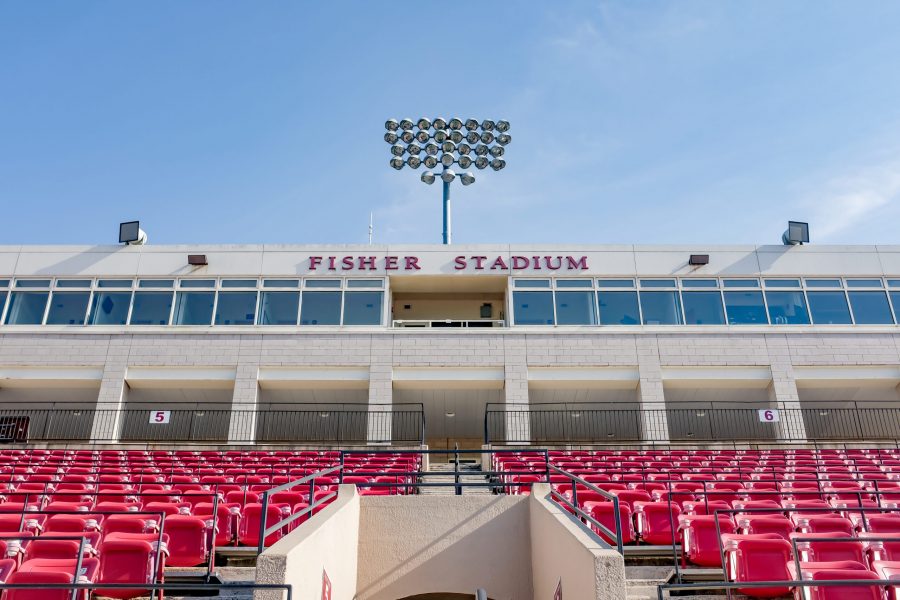 Lafayette won the most recent meeting in 2019 to break a four-year Rivalry drought. (Photo by Caroline Burns '22)

After a 25-point loss at the hands of conference foe Bucknell two weeks ago, the Leopards welcome rival Lehigh to Fisher Stadium tomorrow for the 156th meeting of college football’s most-played rivalry.

The highly-anticipated matchup was postponed a week due to a positive COVID-19 test within the Lafayette program.

Lafayette is 1-1 during an abbreviated spring season, with the win coming over Colgate in mid-March. Lehigh carries an 0-2 record into The Rivalry matchup and has struggled on offense with just three points scored this spring.

The Leopards faced Bucknell on March 27 after consecutive postponements and struggled to shake off the rust in a 38-13 loss to the Bison.

“Fordham getting postponed helped us out a little since we had more time to get healthy,” said senior wide receiver Quinn Revere. “However it did affect our mechanics as we expected and prepared to play a game and that got stripped from us. That was a blow to our team morale as we were ready to play.”

The Leopards were able to drive 75 yards downfield and score on their first drive of the game, but it was all downhill from there. Senior quarterback Cole Northrup hit sophomore wide recover Julius Young for a 61-yard touchdown to take a 6-0 lead, and Lafayette missed the extra point.

On their second drive, Bucknell responded with a 27-yard touchdown pass to take a 7-6 lead. Lafayette’s next drive resulted in an interception, one of three Northrup would throw on the day. The score would stay at 7-6 until the last play of the second quarter when Bucknell hit a field goal to extend their lead to 10-6.

“Everything went wrong, on all sides on the ball,” Revere said. “We started out slow and did not have the same energy that we had against Colgate, this was evident in practice. We had too many turnovers: we cannot turn the ball over four times and expect to win.”

Bucknell blew the game wide open in the second half, scoring 28 unanswered points before the Leopards scored a touchdown in garbage time. Lafayette’s first drive of the second half resulted in an interception which Bucknell converted into seven points just three plays later. Northrup threw his third interception of the day later in the third quarter, which Bucknell also turned into a touchdown seven plays later. Northrup was later pulled in favor of senior Sean O’Malley, and finished 17-of-29 for 204 yards, one touchdown and three interceptions.

The Leopards did not fare much better under O’Malley, who tossed an interception which turned into a pick-six to give Bucknell a 38-6 lead. Lafayette scored a late touchdown with 2:45 remaining in the game but it was too little, too late.

“It’s always hard taking a loss, especially to a team within our conference,” said defensive end Malik Hamm. “We look at the Lafayette-Lehigh rivalry game as an opportunity to play one last game with the seniors because they will graduate and we will not have a chance to play with them again. Our goal against Lehigh is to play tough for them and send the seniors out with a win.”

Following the loss, the Leopards were scheduled to host Lehigh the following weekend on April 3 before the game was postponed until April 10. The COVID-19 exposure was within Lafayette’s Tier 1, meaning the exposure consisted of individuals for whom physical distancing and face coverings are not possible or effective during athletic training or competition.

“I think we learned from a lot from the Bucknell game and I think it set our minds right going into Lehigh,” Revere said. “I think it humbled us a bit, I think we got too high after Colgate because how well we played against them. I think that loss gave us good perspective heading into Lehigh.”

The Rivalry game will also serve as Senior Day for Lafayette, and the team will recognize their 15 seniors prior to kickoff.

“I always preach that the game against Lehigh is the one game each season that everyone asks about, so playing well and winning is crucial,” Hamm said. “Again, this is our last game this season and our last until the fall so my message to the team is to give it [their] all.”

Lafayette leads the all-time series 79-71-5 and has the most recent victory in November 2019; senior kicker Jeffrey Kordenbrock hit the game-winning field goal as time expired to give the Leopards a 17-16 win.

“The team is preparing the same way we do for every game, we are not changing anything up,” Revere said. “Our practice schedule and COVID protocols remain the same. We have been putting in extra work after practice because we know how important this game is and we take a great deal of pride in this game.”