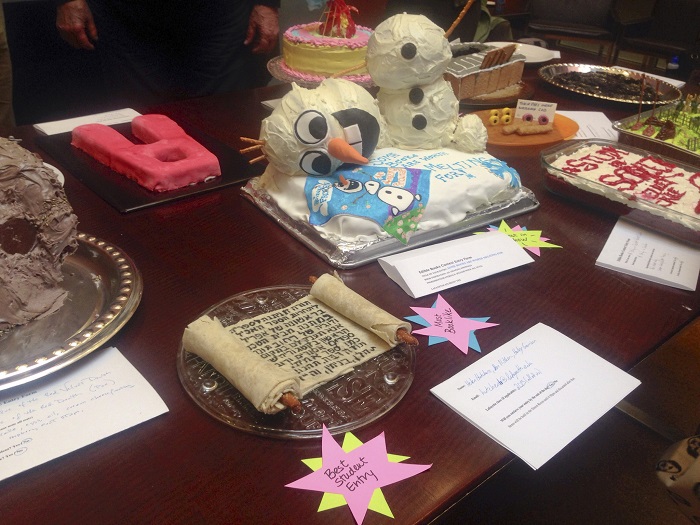 A Shortbread Torah scroll and a Frozen themed entry take the cake as the big winners at the Edible Book Contest. [Photo by Elizabeth Lucy ‘15 ]

The library hosted its fourth Edible Books Contest last Wednesday, where students and faculty were challenged to create an edible piece that is inspired by and related to any book of their choosing.

Sixteen entries were submitted this year, with ideas ranging from the Tart of War, an intricately decorated vanilla cake submitted by Linh Le ’16, to a bowl of ketchup surrounded by rye bread called Ketchup in the Rye.

The entries are judged in seven categories. Shortbread Torah won the categories of “most book-like” and “best student entry.” A Richard III-inspired cake nabbed the “most creative” and the “people’s choice” award. “Best Banned Book,” which was a new and popular category this year, was won by an entry titled “Their Eyes Were Watching Cod.”

“Most Humorous” went to “A Farewell to Arms,” cake that featured plastic soldiers without their guns. It only took Executive Assistant to the Provost Emily Schneider a few hours to make, but she wanted to get across a point.

She said, it is “time to put down the guns and war.”

“Best in Show” was awarded to members of the Foodie house for their submission inspired by “An Amazing Snowman,” a spin-off book from Disney’s animated movie, “Frozen.”

Jillian Fahy ’17 and Kailan Ottoway’16 said it took them a total of about 15 hours to finish because they only had one pan and their cake had many parts. They decided to participate in the competition because of a class that Ottoway took in his freshman year where the professor encouraged students to submit entries.

This event was part of the International Edible Book contest, a worldwide event held every April 1 to celebrate the birthday of Jean-Anthelme Brillat-Savarin, an author and lover of all things edible.

It came to Lafayette in 2011 and has continued ever since, with the exception of last year when they decided to take a break. This year had one of the best turnouts yet according to Ana Ramirez Luhrs, who helped organize and judge the event. Luhrs said that they hope to put on the event again next year.

One of the challenges that the committee faces is a lack of student entries. Pam Murray, a rare books cataloguer and archivist at Skillman Library and member of the original committee that started this contest in 2011 is unsure how to get students to participate in this fun and tasty event.

“The best thing that could happen would be more student participation,”she said.