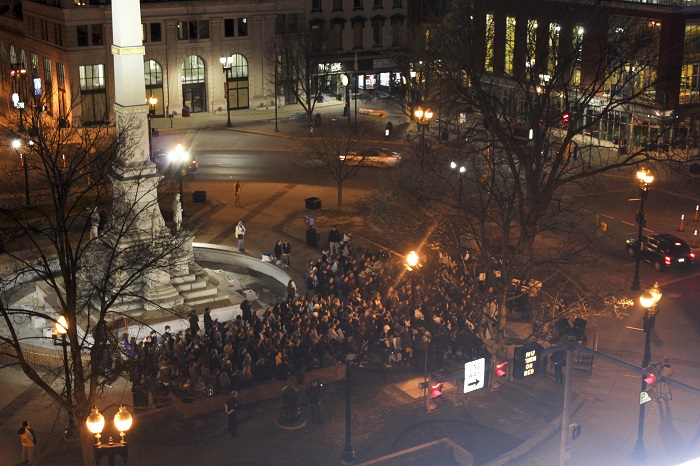 Lafayette students and Easton community participate in Take Back the Night rally
Lafayette students and members of the Easton community took to the streets Monday as part of Take Back the Night, a campaign against sexual assault and violence. The event included a silent march and a rally in centre square, where an open forum created a space for victims, survivors and allies to share their stories.

During the march, some Lafayette students held posters while others carried blue and purple flags, symbolizing awareness for sexual assault and domestic violence, respectively. As the crowd of students reached centre square, they joined Easton residents in chanting“Shatter the silence. Stop the violence.”

An open forum followed, where both Lafayette students and members of the greater Easton community spoke about their experiences. The organizers of the event asked the press that the names of the speakers remain anonymous due to the sensitive nature of some of the comments.

The shared experiences varied and included inappropriate touching on a crowded street, stalking, domestic abuse from either boyfriends or husbands, attempted rape from strangers and sexual abuse from family members.

The survivors also varied in gender and in the age at which they were assaulted with the earliest age of assault being 12 years old.

You don’t have to be female to be sexually assaulted, said one of the speakers, a Lafayette student.

This point was made clear by the one man that took the stage to speak.

For many of the speakers, the experience of speaking out was both nerve-wracking and gratifying.

“I feel very vulnerable and exposed,”said Laura White ’15, who shared her story during the open forum and discussed her feelings afterwards. White agreed to have her name printed in the paper.

“It was almost like confessing one of my deepest darkest secrets to a crowd of how many hundred people,” she said.

At the same time, White said that speaking out made her feel empowered.

“I knew everyone was there to support survivors of sexual assault and that was really surreal to see so many people out there in the square,” White said.“To have it completely filled was really amazing.”

For members of the audience, the experience was equally powerful.

The stories from community members were impactful, because of their detail and their openness, whereas those from people on campus were affective, because they hit closer to home, Black said.

“No one really goes into it expecting it to be as hard to be there as I think it ends up being,”said Nicole Harrison ’16, president of Association of Lafayette Femenists and organizer of the event. “Even planning it, I always forget how intense it can be.”