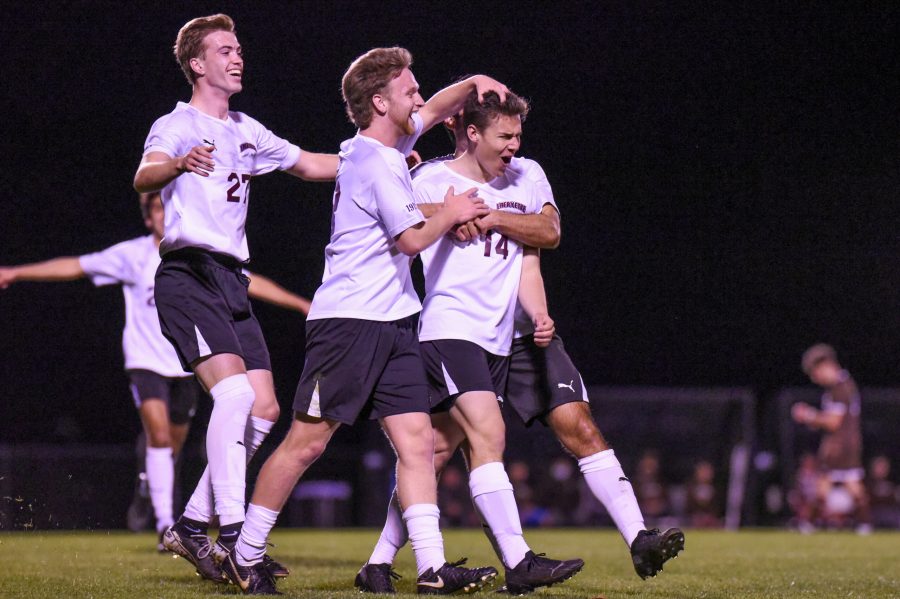 The Lafayette men’s soccer team is headed to the Patriot League championship game for the second straight year.

The Leopards punched their ticket to the finals with a 2-1 win in the conference semifinal game on Wednesday against Holy Cross. Senior defender Andrew Venezia and junior forward Max Ippolito scored a goal apiece, and the Lafayette defense clamped down – allowing just two shots on net in the match.

“I think we dominated the game a little bit more than a 2-1 scoreline,” head coach Dennis Bohn said. “But at this time of the year it’s not necessarily the final score or how it’s done, but it’s just about getting the win and we did that.”

Lafayette got out to a fast start in the game’s opening half, amassing 10 shots and preventing the Crusaders from attempting any. Venezia, who has played all but five minutes this spring, picked an opportune time for his first career goal in his penultimate collegiate contest, with a free kick from 30 yards out to put the Leopards up 1-0 in the 21st minute.

“Especially in the first half we created a lot of chances,” Bohn said. “We probably weren’t at our top potential when it comes to finishing…but it was great that we created so many chances [and] our offense was on.”

Lafayette held a 4-0 advantage in corner kicks in the first half and carried the lead into the break.

The teams traded shots in the second half until the Leopards netted the eventual game-winner. Ippolito took advantage on the counter attack with a shot from 20 yards out, extending the Lafayette lead to 2-0 in the 73rd minute.

“We scored two really nice goals and created a lot of pressure, which was positive,” Bohn said.

But the Crusaders would not go away. A handball in the box gave Holy Cross a penalty kick in the 75th minute, and the subsequent goal narrowed the lead to 2-1.

“Unfortunately, we were up 2-0 and we gave up the penalty kick which was a tough call but something you got to live with,” Bohn said. “It put us under a little bit more pressure than probably necessary in the last five or 10 minutes, but the guys showed a lot of character like they have all year.”

The Leopards managed five more shots down the stretch to keep the pressure on the Crusaders and ultimately clinch the win. The last time Lafayette went to the Patriot League championship was in fall 2019, where they lost at top-ranked Lehigh by a 1-0 score.

But this time the Leopards are not an unproven fourth seed: the team is a perfect 7-0 and has clinched home field advantage for the grand finale. Lafayette has not faced their opponent, American, yet this season because the two teams played in different divisions within the Patriot League this spring.

The team will use scouting reports and some tactical training to get ready for Saturday’s championship game, but Bohn said the most important thing was “getting rest and recovery.” He also described American as “a very physical and combative team.”

“We’re going to have to be prepared to compete and physically earn our style of play,” Bohn said.

Bohn was named the Patriot League Coach of the Year on Tuesday afternoon, his first such honor in two decades on College Hill despite winning three conference championships and three NCAA tournament berths. He is just the third Lafayette coach to win the award and the first since 1998 and joins a handful of Leopards who earned All-League honors.

Individual awards aside, the Leopards would most like to win one more game. They’ll get their shot at a title tomorrow at 3 p.m. at Metzgar Fields.

Attendance will be limited to the families of the players due to surging COVID-19 cases on Lafayette’s campus.