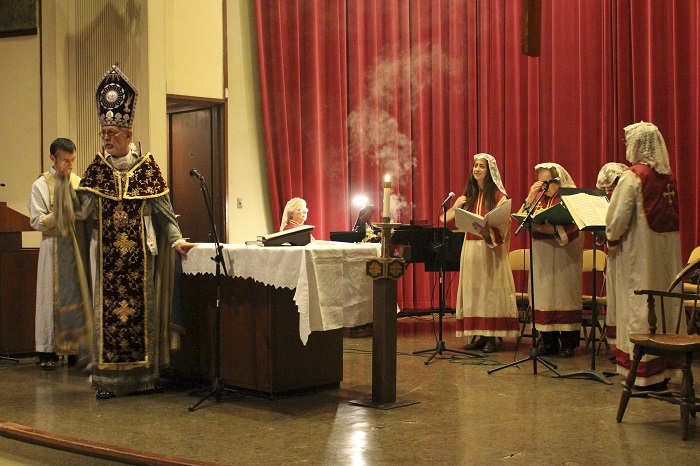 Archbishop Vicken Aykazian, Reverend Father Hakob Gevorgyan, and members of the choir of Holy Trinity Armenian Church participate in a Armenian liturgy to commemorate the 100th anniversary of the Armenian Genocide. [Photo by Julia Brennan ‘17]

Armenian church service held to commemorate 100th anniversary
One hundred years ago 1,500,000 Armenians were killed in Ottoman Turkey. Despite consistent denial by the Turkish government about the reality of the genocide, the Lafayette community chose to recognize the atrocities and commemorate the milestone anniversary.

The church service, sponsored by the Acopian family and the Office of Religious and Spiritual Life was led by His Eminence Archbishop Vicken Aykazian, Legate of the Eastern Diocese of the Armenian Church with Rev. Fr. Hakob Gevorgyan and members of the choir of Holy Trinity Armenian Church.

When asked about the choice to have liturgy as a commemoration, Assistant Professor of History Rachel Goshgarian said, “I thought that introducing the community, or giving the community an opportunity…to observe [an] Armenian church service would be really interesting for some students, because it’s unique and it’s a really old service.”

Despite extensive documents about the atrocities inflicted on Armenian population in Turkey, the Turkish government and those allied with them, such as the United States, still refuses the acknowledge the genocide.

“The Armenian Genocide for a 100 years now have been vehemently denied by Turkey,” member of the Acopian family Alex Karapetian ‘04 said. “United States until this day still doesn’t recognize it as the Armenian genocide because Turkey puts so much pressure on US. They’ll call it everything that is synonym of the word genocide like massacre and atrocities, but the word genocide is not used, which is unfortunate.”

“The political debate about whether or not the word genocide should be used to describe what happened, the massacre and deportations that befell the Armenian populations living in Ottoman Empire is a political debate that has been going on for a really long time,” Goshgarian said. “When a state makes a huge decision like this, they decide that it’s not genocide, it’s very hard to switch back.”

There were several student attendees at the commemoration.

“I think it’s amazing that Lafayette offered this and put it together,” Gabby Minassian ‘17 said.“I’m a little disappointed, because it was shortened liturgy.There was a lot that everyone didn’t get to experience, but the students that came did get a handful of what it is like.”