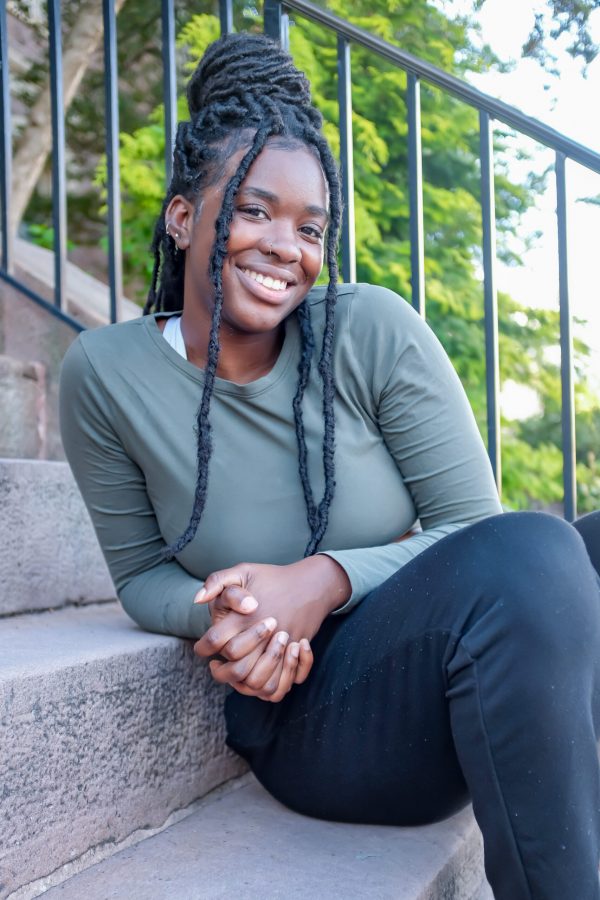 Savanna Touré is a founder of Dear Lafayette College, a Black-led student coalition not affiliated with the college that is dedicated to racial justice on campus. (Photo by Caroline Burns '22)

Ever since she can remember, Savanna Touré ‘21 has felt closely connected to activism.

At the college, this meant diving head first into causes to benefit students of color and members of the surrounding community—and making space for herself where there was none previously.

In July of 2020, after protests in the wake of the deaths of George Floyd, Ahmaud Arbery and many more, compounded by racial injustices on campus, Touré took her activism a step further by co-founding Dear Lafayette College, an organization made up of students dedicated to changing the campus environment for the Black student community.

“I noticed that there was a lack of space for Black students,” Touré said of her early experiences at Lafayette. “Early on, you can tell that there’s a division on campus, and it’s always existed.”

In October, Dear Lafayette released a list of demands to the college’s administration to create a safer and more equitable environment for all students. These comprehensive demands called for reforms in student organizations, student government, residential life, faculty and staff, admissions and policing, among others.

Although there is still much work to be done, Touré said she has seen many improvements on campus since the publication of these demands. She said that noticeably, the housing selection process is becoming more equitable for the Class of 2025, as the college is moving away from the tiered-housing system.

Additionally, there have been changes made to the faculty recruitment process to be more diverse and inclusive and there has been more inclusion of Black students and their interests in student government.

“Student government added a Dear Lafayette ad hoc committee to make sure demands that pertain to student life or student government are being fulfilled and that they’re transparent and accountable to us so that we can update our community,” Touré explained.

Lafayette Mutual Aid, another brainchild of Touré and her peers, is also a vital part of Dear Lafayette’s efforts. Over the summer, mutual aid funds became a popular way to contribute directly to people in need of funding rather than through larger organizations. Touré explained that the program provides funds up to $300 to Lafayette students and other residents on College Hill and in the Lehigh Valley, with a no-strings-attached policy that differentiates it from other aid programs.

Despite all of this work, partaking in activism has not always been easy for Touré.

“It’s difficult in advocacy work, feeling like there are tropes attached to my identity of being aggressive, overpowering or too demanding,” she explained, “I hear those a lot.”

However, as Touré said, that hasn’t stopped her from continuing the fight.

“I’m going to demand what I need and what I want, so demanding what we deserve is going to get pushback, but I’m not going to back down,” she said.

Touré’s involvement in these causes has allowed her to make connections with students at the college and surrounding colleges.

She also expressed that the experience has made her “more appreciative of [her] elders.”

“As a youth, I thought I could lead my own way,” she said. “When I’m at this age, I can tell the direction they want us to go, and they want our dreams and our manifestations to come true. And even if we differ on certain things, they still have our best interests at heart.”

Touré hopes to continue this work in the future, as she plans to conduct health disparity research between African Americans and European Americans, specifically in the treatment of breast cancer.

“That’s something that brings me joy, even when I have low days, because I know it pays off in terms of improving health outcomes for my community,” she said.

For those looking to become involved in advocacy or activism themselves, Touré recommends taking the first step and reaching out to any of the organizations on campus. She urged people to help not only on Lafayette’s campus, but also in the greater community.

“We’re in people’s communities, and we should be doing the work that impacts the whole,” said Touré.