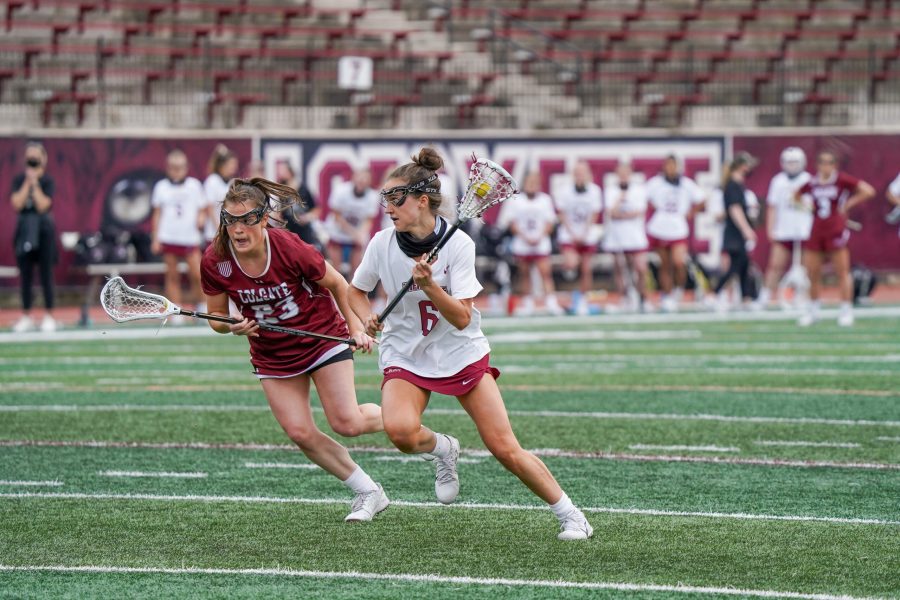 Last Saturday marked a bittersweet ending to a difficult 2021 season for the Lafayette women’s lacrosse team. With an 18-5 loss to rival Lehigh last Saturday, the program failed to record a win this spring in six games.

The team’s closest chance at victory came during the season opener in early March, when the Leopards lost by three to Holy Cross.

Despite the struggles, last weekend’s game against the Mountain Hawks gave Lafayette some reason to celebrate: the team graduates a whopping 11 seniors this spring, who were honored during a pregame ceremony on Saturday.

Due to COVID-19 regulations, parents were not allowed to come to games and participate in Senior Day as they typically would. Fortunately, the Leopards found a creative way to overcome this obstacle. According to Lacy, the parents filmed congratulatory videos for the seniors to watch together on the field.

“It was a nice way to have our parents there without actually having them there,” Lacy said.

“I didn’t know I was close to that number before this last game so it was really exciting. That’s an accomplishment that I’m pretty proud of,” Lacy said. “But obviously, I couldn’t do it without my teammates and my coaches so I’m really thankful to have them all.”

Lacy also made a season-high 15 saves against Lehigh, the most she’s recorded in a game in over two years. The goaltender has played in every single game since the beginning of her freshman year, including starting every game during her sophomore, junior and senior seasons.

“We wanted to enjoy the moment [and] there was a lot of smiling,” Lacy said. “It was really a fun game to play and I was really excited to be there with all of my teammates and have the opportunity to have a Senior Day.”

Lehigh made the most of their opportunities on Saturday, dominating the stat sheet with advantages in shots (43-18) and ground balls (22-9). The Mountain Hawks jumped out to a 9-4 halftime lead and controlled the second stanza by a 9-1 margin.

Stein was the lone multi-point performer for the Maroon and White with two goals on the afternoon. Bannon, O’Brien and sophomore attacker Sarah Bennett had a goal apiece, and freshman midfielder Clare Culligan caused one turnover on the defensive side.

In addition to the family videos played on the field, the seniors received a surprise scrapbook gift made by their underclassmen teammates to commemorate their individual careers.

“Each senior got their own scrapbook and every player that’s an underclassman got their own page in the scrapbook,” Bennett said. “You were able to write an individualized message and put pictures that you had with them in there, which I thought was really sweet because you could take the time to say goodbye to each senior.”

The Leopards may have struggled on the field this spring, but the team’s seniors will surely remember an unusual spring season cut short by the pandemic. Hopefully, most of the memories will be positive ones.

“It’s a bittersweet moment because it’s supposed to be such a happy day,” Lacy said. “At the end there were some tears, but overall I think we did a good job celebrating.”