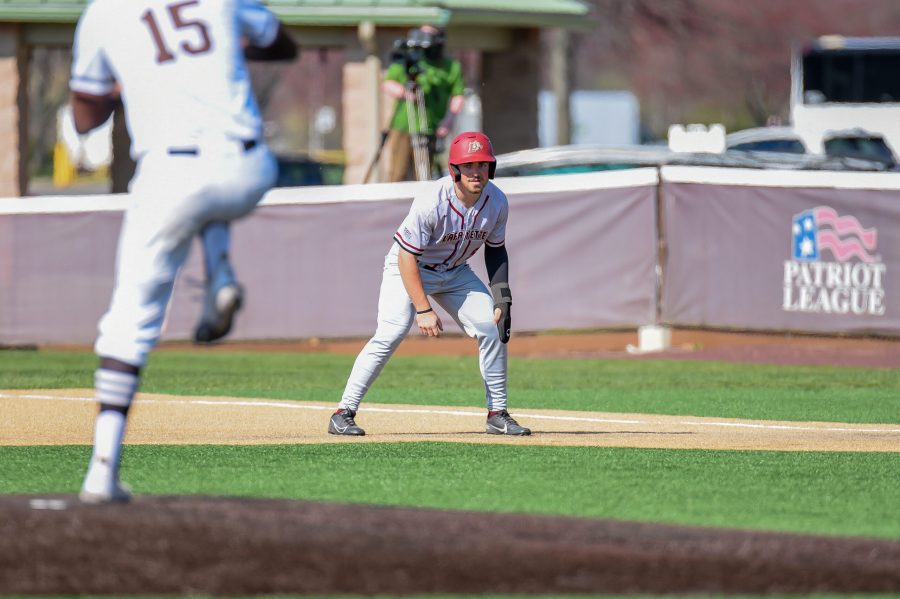 The Lafayette baseball team has their work cut out for them if they hope to stay in the Patriot League Tournament picture.

The Leopards got out to a hot 4-1 start this spring, but dropped their next eight games and held a 4-9 record earlier this month. The team is now back on track after winning two of three games against Holy Cross last weekend, their first series win since late March.

“I’m pretty happy with where we’re at,” said freshman pitcher Luke Benneche. “We had a tough eight-game skid but we are through that and we’re going to have some success down the stretch.”

The team also beat rival Lehigh in a midweek contest before the series against the Crusaders, giving the Leopards three wins in their last four games.

“I feel like we have been gaining a lot of momentum since that point, especially after the win over Lehigh,” Benneche added.

The Leopards beat Holy Cross 6-2 on Saturday and 5-2 on Sunday before dropping the final game of the series 5-4 in extra innings.

Sophomore Jake Bloss took the mound for the Leopards on Saturday, entering with a 2-0 record including a save and a combined no-hitter, the first at Lafayette since 2004. Bloss picked up right where he left off, throwing six strong innings and allowing just two earned runs while scattering six strikeouts.

Holy Cross opened up a 2-0 lead in the top of the third with back-to-back RBI singles, but Lafayette quickly countered in the bottom half of the inning when freshman infielder Blaze Fadio crushed a solo shot. The Leopards followed it up in the fourth inning with two more runs, after junior catcher Dylan Minghini reached on an error, scoring a run, and sophomore infielder Seif Ingram drove in another with an RBI single to center. Lafayette took a 3-2 lead after the fourth and didn’t trail again.

After allowing a pair of runs in the third, the pitching staff shut down the Holy Cross hitters for the rest of the game. After Bloss’s six innings, freshman Joey Pence came in and let up just two hits over three scoreless relief innings, earning his first save of the season.

“I felt like I was a little rushed coming out of the bullpen so I didn’t feel like I had my best stuff right away,” Pence said. “But I felt like I settled in, my fastball started working for me and we got the job done.”

Fadio added to the lead in the sixth with a two-run double, and later came home on an error to push the score to 6-2. The Leopards cruised to the win but had to flip the switch quickly with a doubleheader on the docket for Sunday.

In the first game on Sunday, the Leopards sent Benneche to the mound to make only his second career start and his first in the friendly confines of Kamine Stadium. Benneche looked right at home, striking out six batters over a career-high six innings while allowing four hits and just one earned run.

“I felt pretty good,” Benneche said. “They only had two barrels off of me. It was my first career home start and it was awesome to get that victory.”

The Leopards gave Benneche an early 1-0 lead in the second inning after Ingram reached on a throwing error by Holy Cross and sophomore outfielder Pete Ciuffreda came home on the play. Junior shortstop Justin Johnson knocked an RBI single in the bottom of the third to extend the Lafayette lead to 2-0.

Holy Cross quickly struck back with RBI singles in the fourth and fifth innings to tie the game at 2, but from that point on it was all Lafayette. Johnson hit his second RBI single in the fifth, and Minghini outdid him with a two-RBI single later in the frame to give the Leopards a 5-2 lead which they would hold.

Sophomore closer Nolan Morr shut the door in the seventh inning for his fourth save, recording one strikeout.

Later on Sunday, the Leopards played the second game of the doubleheader in search of their sixth straight win over Holy Cross. The lead switched hands throughout the game, as Lafayette went up 3-2 and 4-3 but couldn’t hold on for the win as the Leopard bats went cold.

The Crusaders tied the game in the top of the seventh with a solo home run and won in the 10th inning off an RBI double.

Sophomore pitcher Jordan Yoder threw two near-perfect innings in Sunday’s second game, striking out four and walking one while allowing no hits. He later earned a Patriot League Pitcher of the Week nod for his efforts against the Crusaders, and for a seven-inning, one-run performance against Lehigh the week prior.

Although they missed the series sweep, the Maroon and White are now 5-4 since their eight-game losing streak and are 3-1 in their last four games. The Leopards move to 9-12 on the season and will play a home and home series against Army over the weekend.

Friday’s doubleheader will feature games at 1 and 4 p.m. at Metzgar Fields.