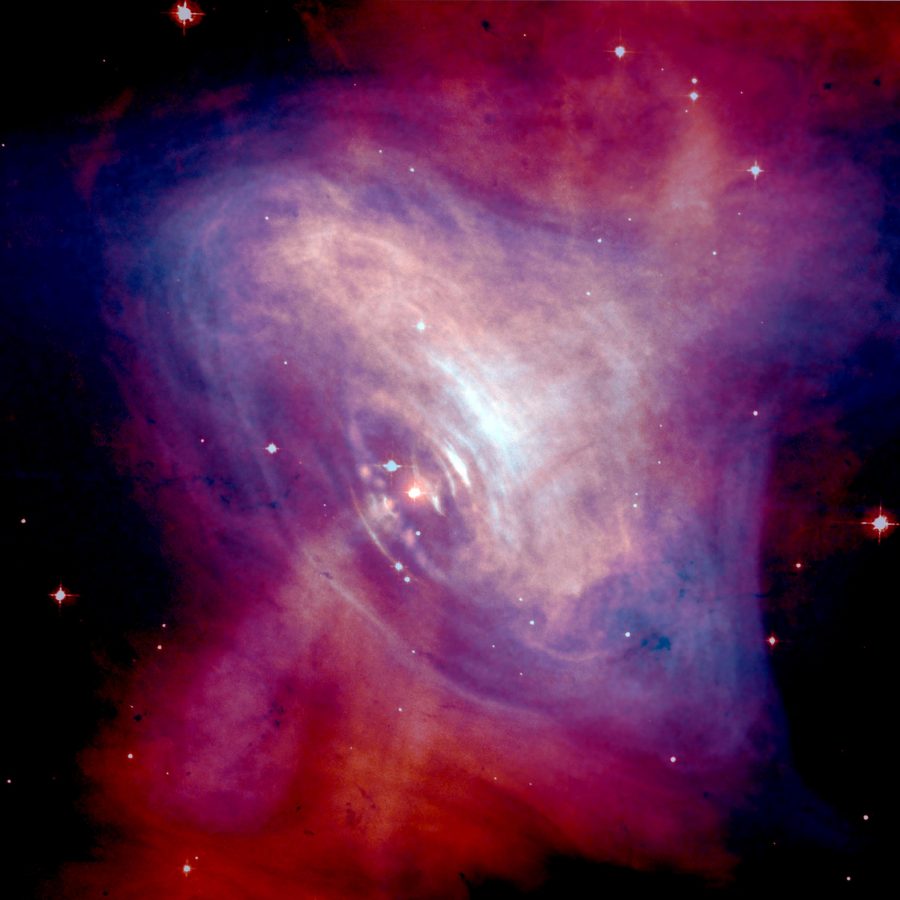 Emissions from pulsar in the Crab Nebula. Photo courtesy of Wikipedia.

The $14.5 million dollar grant from the National Science Foundation was allotted to certain institutions across the country participating in gravitational wave research. The grant was received by the North American Nanohertz Observatory for Gravitational Waves Physics, or NANOGrav, an organization that Lafayette physics professor David Nice has been a part of for over a decade.

Along with nine other institutions, including Franklin and Marshall College and West Virginia University, Lafayette’s team is attempting to directly detect gravitational waves through the observation of pulsar stars—a type of star that spins quickly, releasing electromagnetic radiation. Gravitational waves are ripples in space-time caused by massive objects, like black holes, accelerating and orbiting each other, which then affect pulsars’ motion.

Gravitational waves were predicted by Albert Einstein in his Theory of Relativity, but have never been directly detected. There is strong indirect evidence of their existence, Nice said, but no direct evidence, which is the purpose of NANOGRav research.

“The main goal is trying, through some mathematical model, to predict the time of arrival of the pulsars,”physics major and EXCEL research student Hao Lu ‘16 said.

With this grant, the college will be able to provide more research opportunities for students interested in this field of study. The grant can also fund a post-doctoral researcher who, according to Nice, will come to the school within the next couple of years to assist in multiple ways. Travel expenses will also be more easily covered. Nice and his team of EXCEL students have made multiple trips to the Arecibo Observatory in Puerto Rico, where the radio telescope they gather data from is located.

Although they can access the telescope remotely, it is necessary to meet with other experimental and observational astronomers and theorists occasionally. One of Nice’s research students, Allison Matthews‘15, presented her thesis on gravitational waves at a conference in Puerto Rico this past February.

“For future career options, it’s really great to meet people,”said Matthews, a physics and math double major. “Students will have to possibility to make the networking connections with scientists all around the world because this is an international collaboration.”

Everyone involved acknowledges the benefits of research opportunities for students.

Along with Lu and Matthews, Sarah Henderson ’16 and Enia Xhakaj’17 have been involved with the research as EXCEL scholars as well.

“To be involved with this kind of high level collaboration with other excellent schools is not only a benefit to the individual researchers, but also a benefit to the to the college,”President Alison Byerly said. “Placing us on a par with other institutions undertaking substantial research I think…is enormously beneficial to Lafayette.”