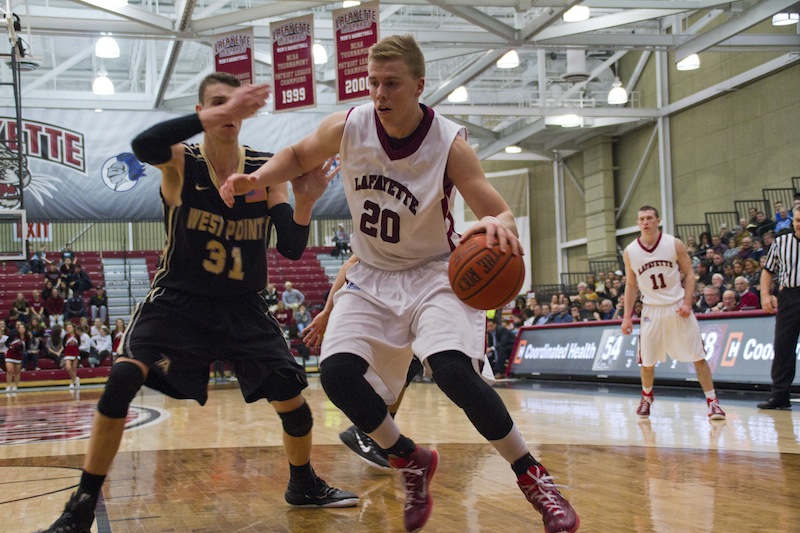 Dan Trist dribbles on the baseline past an Army defender. [Photo Courtesy of Athletic Communications]

The tournament is a four-day event in which college seniors from all over the country come to play in front of representatives from every NBA team. Players participate in a set of drills and skill competitions on the first day, and then play in a series of games to showcase their talents.

Trist welcomed the competition with players he wouldn’t necessarily get a chance to face during the season.

“It was a lot of fun, and it’s a big thing playing against power conference players,” Trist said. “You go on to show that you can play with the top level players in college basketball, and I showed that so it’s a success from that standpoint.”

Trist’s team went 1-2 during his time there, and the 1,491-point scorer at Lafayette made a decent showing, scoring nine, six and seven points in his games.

The tournament also gave Trist a chance to play with a more professional set of game rules.

“It was NBA rules, so it was a wider three point line, wider lane and a lot more contact being called as fouls, it was just a good experience to play those kind of rules in a more professional style game,” Trist said. “It was more up-tempo and the shot clock was 30 seconds instead of 35. At the same time it was still like an all-star event—everyone was getting a lot of shots up.”

Few Patriot League players will see a real opportunity to play in the NBA. However, scouts from professional European leagues are also in attendance. These scouts usually are more interested in the likes of Trist.

Trist was coy on the issue, but it appears as though the prospect of playing basketball past college could be a reality for the Australian center.

“That’s definitely an option to consider,” Trist said. “Without going into details, I’ve had a few teams and some agents reach out to me.”

The experience predictably differed tremendously from that Trist’s four-year experience with the Leopards.

“It wasn’t like merit based playing necessarily,” said Trist, commenting on the individual agency necessary for fighting his way towards becoming a starter at Lafayette.

“They started who they thought was a good group to start with, but it was everyone get equal time in the first half, and then whoever was having good chemistry together would play together in the second half,” he added.