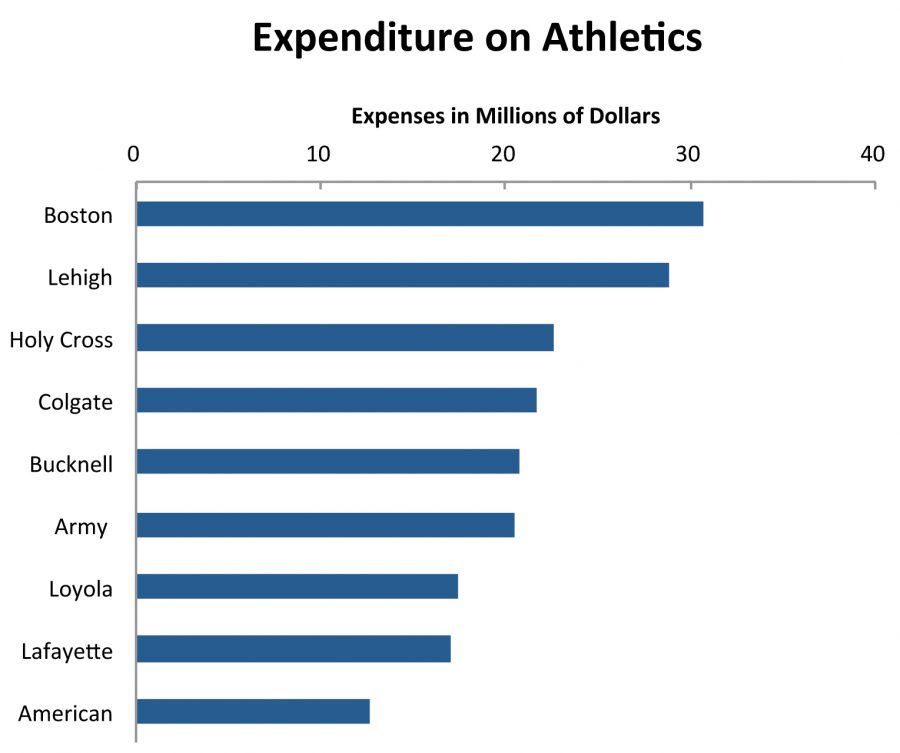 The graph above shows total expenditure on athletics for Patriot League schools.

Katelyn Arnold
Numbers show no relationship between spending and winning
It’s well known that in professional sports more money leads to more wins. In the MLB, the past two worlds series champions, the San Francisco Giants and Boston Red Sox, were among the five highest paying teams in the MLB in 2014 and 2013.

Even though big spending has a led to big wins in professional sports and big market college teams, the trend does not seem to apply to the Patriot League.

On the other end of the spectrum, Boston University dominates the league when it comes to spending, with a total expenditure of $31 million. Only Army trails behind in recruiting expenses with $607,081. Boston University’s athletic related student aid costs sum to $15 million. Lafayette is second to last in the Patriot League, in terms of dollars spent of athletics.

At Lafayette, two-thirds of our athletic budget comes from the college itself and the remaining third is from fundraising groups. The Maroon Club, along with groups like Friends of Football and Friends of Field Hockey, raised $1.2 million for the athletic programs in 2014. This money goes to fund travel, apparel, food and equipment. These expenses are important to attract recruits to play at Lafayette, head field hockey coach Jennifer Stone said.

As Executive Director of the Maroon Club Joe Giaimo said, it is costly to find recruits who have the academic credentials to come to Lafayette, as well as have the skill and athletic ability to help teams compete at a high level. Because these prospects aren’t readily available, coaches must travel to find them.

“We want to be able to attract the best student athletes in the country and in the world to come to our campus so we can compete for Patriot League championships,” Giaimo said. “To go and find those players, it costs money. The costs to travel for that are expensive. Now that most of our programs are scholarship, its not just [the head] coach going to recruit, it’s [their] assistants as well because when you’re dealing with scholarships now, you have to make decisions that much quicker.”

Even though American comes from the bottom of the barrel in terms of funding, they seem to be an outlier. Lehigh has the second highest total expenses in the Patriot League. They are behind American in the sample of sports teams with 13 championships.

However, even with their large budget, most Patriot League teams seem like they were able to compete with BU athletically. Take, for example, Lafayette’s men’s basketball team.

In order to win the Patriot League Championship, the Lafayette men’s basketball team had to defeat Boston University in the first round of the tournament. They won the game by 25 points.