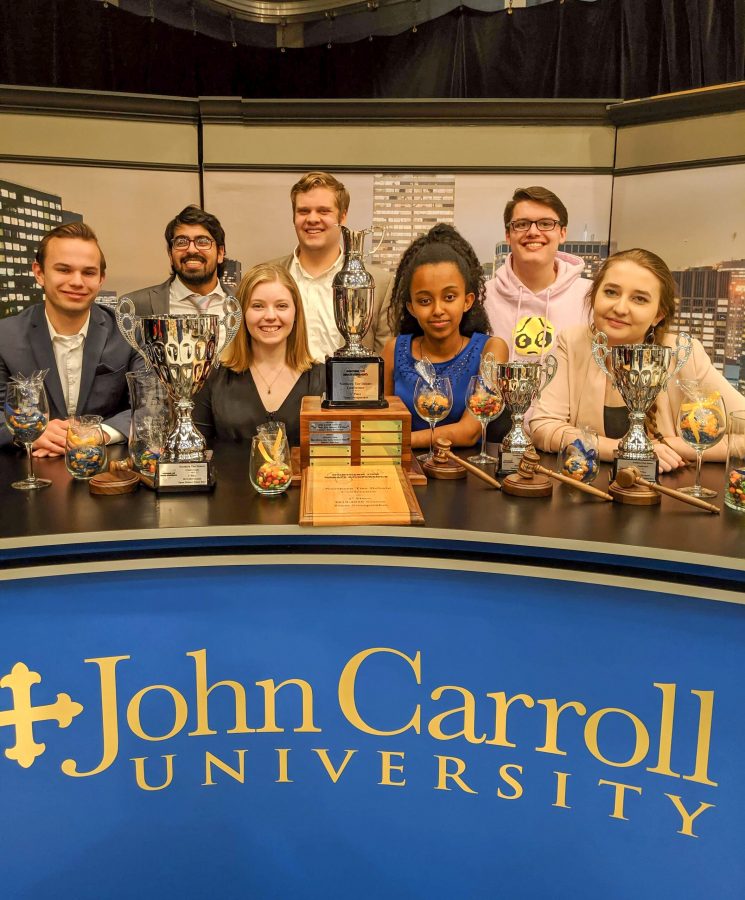 The Lafayette Speech and Debate team earned their highest placement in six years this past weekend at the National Forensics Association tournament. The team placed fourth in the debate sweepstakes and fifth in the division two sweepstakes overall as president Luisa Gunn ’21 earned a spot as one of the top four debaters nationwide in the Lincoln-Douglas debate category.

To qualify for the tournament, members had to have broken at one or more tournaments during the regular season, meaning they had to advance past the preliminary rounds and into a final, quarterfinal or octo-final round depending on the size of the tournament.

Gunn qualified for the semifinals this year, which was the first time Lafayette had a semifinalist in six years. She debated in a double octo-final and won a quarterfinal round to make it to the semi-finals.

“After four years of hard work and dedication, it is very meaningful to me to be one of the top four in the country. Being a novice in the community who had never done this before high school, I wanted to send a message to my team,” Gunn said. “I wanted to let them know that you don’t have to be an insider to do well in the debate community. Our team cultivates a community and space where you can grow, learn and progress.”

Gunn was one of the top students in the Northern Tier Debate Conference this year and won top debater and speaker awards.

“This accomplishment gets our region out there, the success is so exciting and helpful to the entirety of schools in the area because it helps keep debate funded, supported and relevant,” Gunn added.

The team had to attend nationals in a virtual format for the first time this year. To adjust, they have been acclimating themselves to online speech and debate by attending competitions throughout the year.

“The adjustment for speech was a lot harder than debate because having a crowd and being able to work people is really important for some of the speech events,” Gunn said. “This year, it definitely feels like there is a real barrier between you and the people you are talking to.”

Members of the team qualified by mid-November of this past year and have been extensively preparing for nationals. On a weekly basis, members have team meetings that are often four hours long, and they meet individually with the two coaches for an additional two hours a week. Some of the competitive seniors meet with the coaches multiple times a week. In order to better prepare themselves, the week before any tournament, the team participates in two practice rounds: one for each side of the argument.

“Considering the amount of hard work and effort the team put forth, going to nationals wasn’t much of a surprise,” co-vice president Yordanos Mengistu ‘22 said. “Students who have qualified and made progress in the tournament were highly prepared and determined.”

The team consists of a mix of students who have done speech and debate before and those who have never participated in a tournament. They have been able to foster an environment where students feel a part of the community that encourages them to step out of their comfort zones and challenge themselves.

“One thing that is special about Lafayette debate is that, unlike many other schools that pull students with prior high school experience, we are not a scholarship team. Lafayette has a lot of true novices,” said Ceci Montufar ‘23, who is the co-vice president alongside Megistu. “These are students who come to college never having done debate before or have very little experience. The coaching staff and overall dedication of the program is able to bring true novices like Luisa to the semi-final round of nationals.”

The dynamic nature of the competitions has enabled younger members to step outside of their comfort zones and engage in meaningful dialogue with professionals.

“There is a lot of interaction with the judges during conferences. For younger students especially, it can be very intimidating to interact with adults who are professors and leaders in their field. Debate is able to provide [students] with the means to learn how to navigate that kind of space and get used to receiving feedback and asking questions,” Montufar said.

For many members of the team, participating in Speech and Debate competitions has helped them gain valuable experiences and skillsets they use beyond the competitive environment. While the past year of virtual competition has been unprecedented, the team has managed to overcome the challenges and put forth their best, which they hope to carry into the coming year.

“Speech and Debate has an incredible way of helping people advocate for themselves and feel more confident in their ability to speak up for what they believe,” Gunn said.