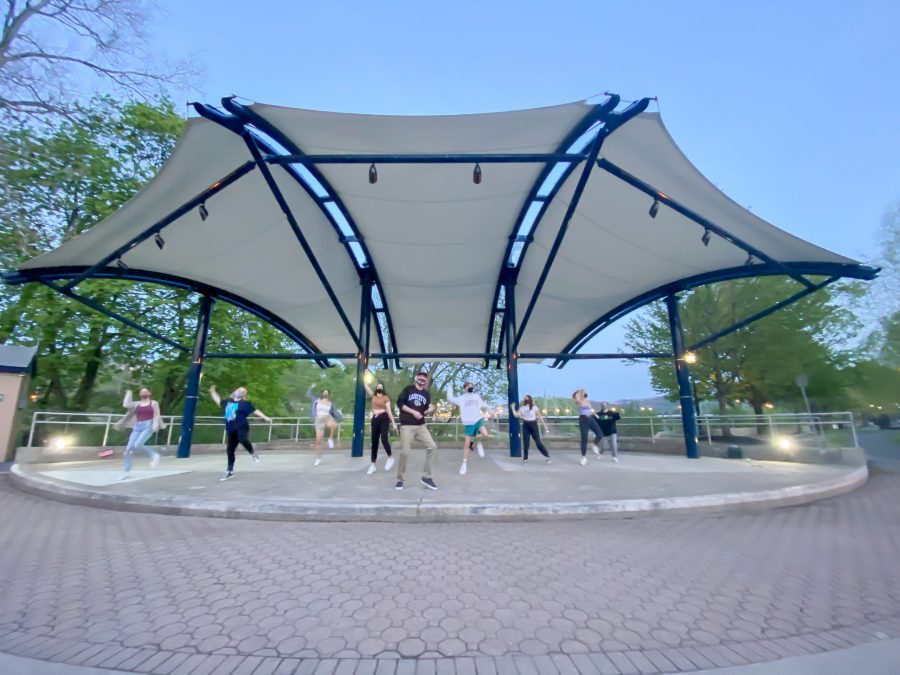 The Marquis Players' production of 'The Wedding Singer' will take place next week. A filmed version of the production will be streamed sometime in May. (Photo courtesy of Lizzie Gumula '22)

Choreographing any show is tough. Doing so through a Zoom screen is even tougher.

This has been the most recent challenge for Margot Galopin ’22 as she choreographs the Marquis Players’ upcoming in-person production of “The Wedding Singer.”

Galopin isn’t the only one carrying out her duties over Zoom. Almost the entire production team for “The Wedding Singer” has been sent to quarantine in recent weeks as a result of COVID-19 contact tracing. After maintaining a strong hold at Operational Level 1 since the first month of the semester, a recent rise in cases on campus sent the college into Level 2 on April 14.

For the Marquis Players, this has meant outdoor rehearsal at the amphitheater in Riverside Park, where they are able to meet in-person under the supervision of advisor Allison Blatt after filling out a formal mitigation plan. In temperatures as low as the forties, the cast rehearses while masked and socially distanced and the production team communicates with them over Zoom through a speaker system set up at the theater.

But after the Marquis Players’ production of “Footloose” was canceled last spring due to the pandemic, the group is still eager to make a return to in-person musical theater.

Thankfully, for stage manager Lizzie Gumula ‘22, being quarantined last week was not a complete hindrance, since her role will start to pick up during the production’s tech period on Saturday. Although the circumstances are not what participants were hoping for, Gumula noted that the cast and crew continue to push through these unpredictable times.

“It’s amazing watching them on Zoom, you can see how hard people are working in the amphitheater,” she said. “They are all so easy to work with because they want to be here.”

Director Billy Devito ‘22, has done most of his job over Zoom, blocking scenes without being physically present. While directing from his room is not ideal, with all the expected connectivity issues, Devito said he has nonetheless seen the show coming along well.

“I was panicking at first, but people have been so able to adapt and listen, it really has not been an issue,” he said. “I think since theater has been on Zoom for the last two semesters, we have rather mastered how to do theater on Zoom.”

While the production team has been quarantined, assistant members have helped keep things running smoothly as all rehearsals this semester have been in-person.

“Quarantine has been a struggle. Luckily we have some exec members who are in the show who are able to take some more leadership positions during the actual rehearsals,” Galopin said.

She expressed gratitude for assistant choreographer Timmy Mayrose ‘23, who has been teaching the cast the dances while Galopin can not be there. Gumula credited her assistant stage manager Eleanor Williams ‘22 for helping out in her absence.

The Marquis Players are planning to hold reduced capacity in-person shows of the musical at the amphitheater from May 6 to May 9. There will also be a recorded version of the show streamed for more viewers at a date to be determined.

“Our production team has been able to roll with the punches and navigate everything that COVID is throwing at us and make a show happen,” Galopin said.

“I’m proud of everyone in this case for their resiliency and ability to overcome any obstacle that comes their way. Everyone, no matter what their role is, is giving 110 percent,” Devito said. “I am hoping that we have a production that really makes people excited for the return of in-person theater.”

In-person and virtual tickets can be purchased online.