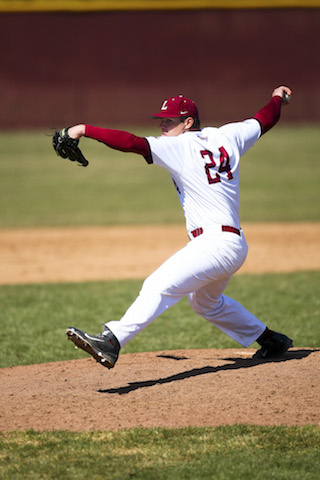 Bednar on the mound against Bucknell. [Photo Courtesy of Athletic Communications]

Michael Keating
An amateur ace is a pro at retiring batters
Ever since he stepped on campus two years ago, sophomore David Bednar has been a dominating presence on the mound for the baseball team. After beginning the season as the third starter in the Leopards rotation last year, Bednar progressed to become the ace of the staff.

Bednar’s rookie campaign was no fluke. Appearing in only nine games last season, Bednar was still able to lead the team in strikeouts. Last year, Bednar finished the season with a 9.97 K/9IP (strikeouts per nine innings pitched) rate. This season, he boats an equally impressive 9.00 K/9IP rate. In short, he makes batters miss—a lot.

Despite his 2-5 record, he currently boasts a team-best 2.40 ERA. Another remarkable statistic is opponents’ batting average against him. In 2014, his opponents hit .204 against him. This year that number went down to a stellar .198. It is easy to see why Bednar is considered one of the best pitchers in the Patriot League.

One area of concern for Bednar is his control, which is the reason for why opponents’ batting averages do not coincide with his ERA. In his first year on college hill, Bednar hit 19 batters, which equates to roughly one per 2.3 innings.

This year, however, is a different story. Having only hit five batters through his first nine games, Bednar has lowered that rate to one hit batter every 9.0 innings. Although it is a major improvement, the rate is still a bit high. But Bednar recognizes this as an area where he needs work.

“I want to just be more consistent and work on my off-speed pitches,” Bednar said.

Bednar has an arsenal of pitches, containing a fastball, changeup, slider and curveball. Although in the past he seemed to have some trouble with the curveball and slider, he worked on those pitches. Now, they are an integral component to his success. In regards to his future personal goals, Bednar likes to keep them simple.

“I just want to keep getting better and help the team win games,” Bednar said.

Along with his personal strives for success, Bednar also has high expectations for his team.

“This season we’d like to make the Patriot League tournament and win it,” he said.

His team goals are definitely obtainable, too. Lafayette currently sits at an 8-8 record in the Patriot League and is in fourth place. Despite the team’s losing out of conference record, the team should be able to make a playoff push in league play, much like the 2013 football team.

In order to do so, the Leopards will need to find a leader. Bednar will look to mimic the traits that his own role model has shown—his father.

“My dad has always been a mentor to me,” Bednar said. “When I was younger he always took me to the field and the weight room.”

Off the diamond, Bednar keeps things light. So far, one of his favorite memories at Lafayette was on the other side of the mound.

It is quite the achievement for Bednar, as he has still yet to record an at-bat in a collegiate game.

Bednar has proven a lot during his first two seasons at Lafayette. Eyes will be on him as one of the best pitchers in the Patriot League for the next two seasons.